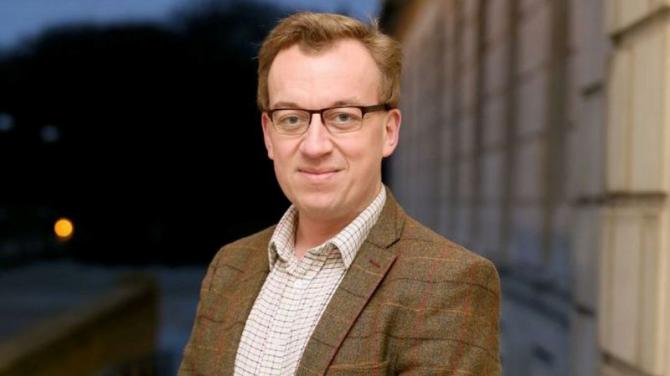 SOUTH Antrim MLAs have paid tribute to Christopher Stalford, the South Belfast rep who passed away suddenly at the weekend.

Mr Stalford (39) was principal deputy speaker and had represented South Belfast since 2016, having served previously as councillor, high sheriff of Belfast and deputy mayor.

He is survived by his wife Laura and four children.

Ahead of a sitting of the Assembly on Monday, DUP assembly members gathered in the Great Hall at Stormont to pray.

Party colleague, South Antrim MLA Trevor Clarke said: “Devastated by the news of the passing of my colleague Christopher Stalford.

“My thoughts are with his wife, children and wider family circle at this very sad time.

“A huge loss to the Assembly and Unionism.”

Ulster Unionist man Steve Aiken said: “My, and all of our families thoughts and prayers are with Christopher and his family.

“Christopher was a rarity amongst us, he was witty, spoke well, knew his brief, was determined and driven by a strong belief in what was right.

“He will be sadly missed.”

“A truly dedicated public representative who believed debate should be courteous and relations with others good.

“He will be very much missed.

“My sincere sympathy to his wife Laura, their children, wider family and his colleagues.”

And Sinn Fein’s Declan Kearney said: “I am shocked to learn of Christopher Stalford’s death.

“My thoughts are with his wife, young children, his friends and DUP colleagues.

“We often disagreed on media, in the chamber and committee, but could always have friendly chats. We disagreed well.