It's Bob Ross vs Bob Ross! Antrim vs USA in a very artistic showdown 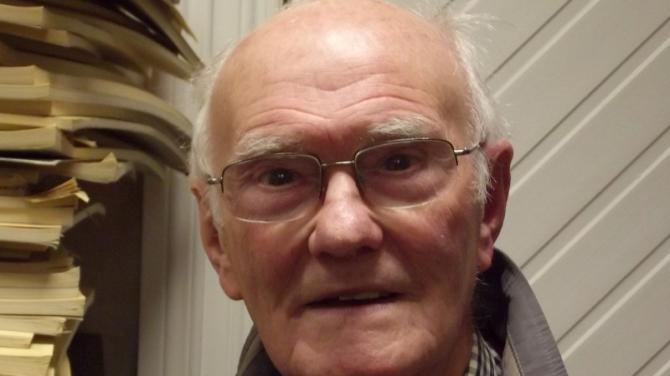 IN a lighthearted look at two artists who share the same name, the Antrim Guardian this week profiles Bob Ross - and Bob Ross!

On the home team, Bob Ross (Antrim) was the first artist to exhibit at Clotworthy Arts Centre, and the last, before the multi-million pound metamorphosis of the Castle Gardens in recent years.

His work also lines the walls of the Council’s Civic Centre - his drawings taking pride of place in their £120,000 art collection.

Not bad for a man who had found himself ‘on the scrap heap’ following the collapse of British Enkalon in 1984 - a sad state of affairs compounded by the fact that he had played an integral role in shaping the textile giant in the first place.

But ‘Bob the builder’ had a few tricks up his sleeve.

He could draw and, better still, people were prepared to pay for it.

A few years ago the local man, who was raised in a cottage near the old ‘devil’s elbow’ on the Dublin Road, recalled the many quirks of fate that saw him travel far and wide before discovering that there is no place quite like home.

A scholarship boy at Methody, long days spent at the Ulster Museum saw Bob looking at the pictures in the art galleries, marveling at the detail.

After a couple of weeks he noticed that a member of staff was keeping an eye on him.

After chatting about their favourite paintings, the man asked to see examples of Bob’s own work.

“He seemed to like them and he asked me what I wanted to do after leaving school. I said I wanted to be a draughtsman, but he insisted that I should go to university to study Art.

“He looked at me and said: ‘You are the best young artist working in pencils that I have seen’.

“I later discovered that the man in question was famous poet John Hewitt.”

But the young lad from Antrim did not share Mr Hewitt’s belief and he went on to become an apprentice fitter at Harland and Wolff - but the seed had been planted and before long he was drawn to the famous Drawing Office.

There he sharpened his skills, so when a draughtman’s post opened up in Holland he ‘jumped at it’. Impressed by his grounding in the world famous Belfast shipyard, they took him on.

He worked, for a time, at the Atomic Weapons Research Establishment at Aldermaston during the time of the famous ban the bomb marches, before moving to Matthew Hall Engineering in London - who were starting work on plans for an ambitious new textiles plant in Ireland for a certain Dutch client - Enkalon was opening, in his own town.

Bob ended up number two in the construction project.

But the dream job did not last. When the shutters finally came down a few years later he found himself redundant at the age of 53.

But he did what came naturally - and he started to sketch.

In those early days commissions were few and far between, but some jobs - such as illustrative work on Alastair Smyth’s ‘The Story of Antrim’ - showed what he was capable of.

And soon the phone started ringing - including a timely call from a Belfast estate agency - and he was busier than ever completing architectural drawings. At that time, Bob the only person in Northern Ireland doing such work.

Then one afternoon he answered a loud knock at the door, to be met by two burly army officers

They had seen Bob’s pictures and they commissioned him to draw pictures of historic buildings significant to them - including Belfast’s courthouses.

For over 30 years he routinely completed two pieces a week from his own studio, including dozens of his native Antrim. He has also drawn inspiration from Londonderry, Belfast, Dublin and the rugged coast of Northern Ireland.

Famous clients included former MP Gerry Fitt, who gave him a tour of the Houses of Parliament and introduced him to Margaret Thatcher.

“I’ve met so many lovely people through my pictures. It really has been wonderful.” he said

“I’ve been fantastically fortunate that I’ve somehow managed to make a living out of a hobby. I’ve been plugging away at this for years and I’ve never been out of work.

The drawings remain as fresh as ever - and they will stand as an enduring testament to a man who certainly made his mark.

AND what of Bob Ross: - the American version?

Known for his fast and easy ‘wet-on-wet’ painting technique, Bob Ross has reached millions of art lovers with his popular television show The Joy of Painting, which can often be found showing on BBC Four.

His quiet, calm and gentle presentation and easy to follow instructions - as well as his patter, with ‘happy little trees’, and ‘friendly clouds’ - have won him millions of fans.

Most do not even paint along with him, but just watch to enjoy his relaxing style and the soothing noise of his brush on the canvas.

Bob also promoted the idea of ‘happy accidents’ - if you make a mistake, turn it into a positive.

He was raised in Orlando, Florida and learned a love and respect of wildlife from his mother, while his father was a carpenter.

For a short time Bob worked with him but after an unfortunate accident where Bob cut off one of his fingers he decided that carpentry wasn’t for him and dropping out of school, in 1960 he joined the Air Force as a teenager.

Stationed first in Florida he was eventually transferred to an airbase in Alaska.

During his service there, Bob took his first painting lesson at a USO Club in Anchorage and became fascinated by the mountainous, forested landscapes he saw.

He also took a job as a barman and sold his landscape paintings to tourists.

Behind the bar, Ross watched a German TV show called ‘The Magic World of Oil Painting’ hosted by Bill Alexander and learned that he could make a lot more money by selling his paintings, than by working in the Air Force.

After 20 years of service, he retired to pursue painting, expanding on and creating his own version of Alexander’s ‘wet-on-wet’ technique with his own custom brushes and paints.

Always trying to save on money, he got his hair permed to avoid getting repeated haircuts.

While he did not like this hairstyle, it later became his signature look.

Bob wanted to share his love of art with others and while classes and public demonstrations went down well, they were not reaching a wide enough audience.

He was regularly asked to appear on talk shows and even recorded a promo for MTV. The show was broadcast in several countries and he became a well-known public figure.

Bob also launched a series of instructional books and a line of art supplies. He built up an impressive business empire worth $15 million but in the 1990s, he donated all his paintings to PBS stations while earning his income through the sale of books, videos and art supplies.

He wrote more than 20 books and recorded over a hundred videos and has completed an estimated 30,000 paintings during his lifetime.

Intensely private, Bob Ross married twice and had three sons. He was diagnosed with lymphoma in the 1990s, and retired from public television in 1994.

For sure, the American Bob Ross is more well-known globally - but who is your favourite Bob?