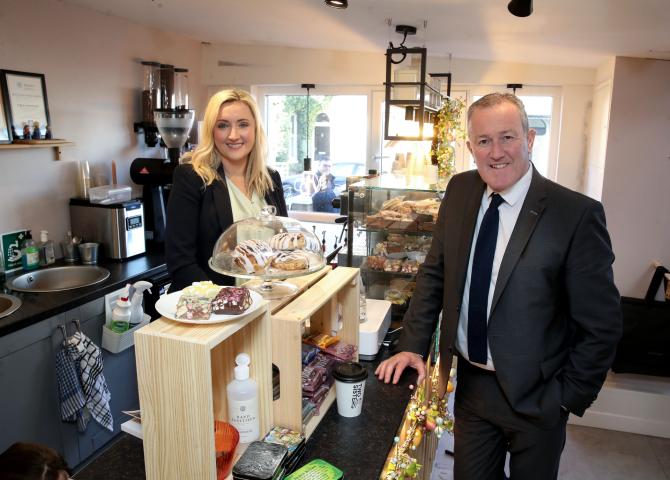 Finance Minister Conor Murphy has secured Assembly backing to freeze the regional rate for another year.

The Minister also confirmed he intends to provide businesses with a £50 million rates support package in the 2022/23 financial year as well as continuing the Small Business Rate Relief which will benefit thousands of business premises.

Visiting Two Sisters artisan food and craft store and Bumbles Day Care in Belfast, which will benefit from the extension of the rates holiday, Minister Murphy said: “Over recent months I have visited businesses from all sectors across the North. The common message coming from these businesses has been that the rates holiday was a vital lifeline for them during the pandemic.

“As businesses continue to rebuild, I am announcing a further £50 million rates support package to support the recovery. This will provide all businesses with a one month rates holiday with the exception of utilities and larger food stores while retail, hospitality, tourism, leisure, childcare, newspapers and airports will receive a three months rates holiday. Businesses in these hardest hit sectors have paid no rates since March 2020 and will now pay no rates until July 2022.”

Welcoming the Assembly approval on the regional rate freeze, Minister Murphy said: “Recognising the cost of living crisis, I had proposed as part of the draft budget a proposal to freeze both the domestic and non-domestic regional rates for the next three years. This freeze was intended to help with the rising costs being faced by families and businesses alike. While a final budget for the next three years has not been agreed by the Executive, I can proceed with this freeze for the first year. The Assembly backing today will freeze household and business rates for the next 12 months, giving households and businesses certainty in the immediate time ahead.”

The Finance Minister also announced the extension of the Small Business Rate Relief scheme, under which small businesses automatically receive a reduction of between 20% and 50% on their rates. Outlining the importance of this for small businesses, Minister Murphy said: “Small businesses are at the core of our local economy and have a vital role in contributing to employment opportunities. I am glad to announce the continuation of the Small Business Rate Relief scheme which currently supports almost 29,000 business premises. The extension of the scheme sends a strong message of the important contribution of the small business sector.”

The Minister concluded: “While it’s not possible to finalise the 2022-2025 Budget, businesses need certainty and to be able to plan ahead. These vital measures build on the around £1 billion support my department has provided through rates relief and Covid grants and will give businesses time to recover.”