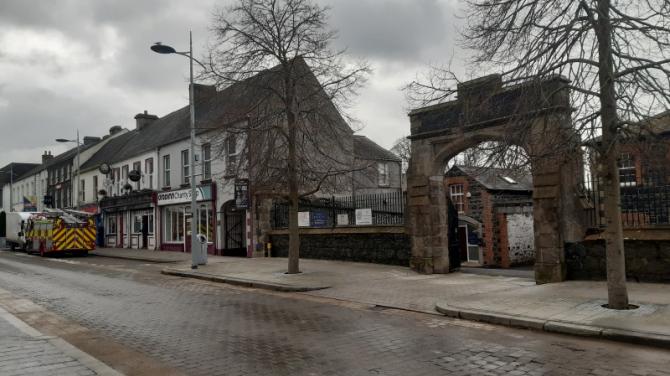 PLANNERS have recommended refusal for the part-demolition of existing buildings to rear of Market Square in Antrim town centre and the proposed development of 15 apartments - served by just five car parking spaces and minimal outdoor amenity.

The issue was due to be debated by Antrim and Newtownabbey Borough Council’s Planning Committee this week, with the agent for the applicant claiming that the beer garden at Barney’s bar would to be removed to accommodate the flats.

Meanwhile, NI Water is recommending that no further connections should be made to the network at that part of the town, as the sewers are ‘at capacity’.

The applicant is Mr B Heffron and the application site is located on lands to the rear of 19, 20, 21 and 21 A-F Market Square, within the commercial core of Antrim town’s Conservation Area and there are several listed buildings in close proximity.

The application site is comprised of two parcels of land.

One is to the rear of the charity shop at number 21 and accessed through the archway. Leading to the rear of that parcel of land lies a car park area and a number of small vacant commercial units and outbuildings that are attached to the rear elevation of that building, which are in a poor state of repair.

The second section of land, to the rear of the existing Barney’s public house at 19 – 20 Market Square, comprises a flat roof rear return and an elevated beer garden and terraced area with several trees at the foot of the plot.

The rear of the application site bounds with the Six Mile Water river and the Boardwalk. There are also a number of listed buildings in close proximity to the application site, including the former police station building, Antrim Castle gate house and walls, the Old Courthouse and the Ulster Bank building.

Council’s Environmental Health Section has made a request for a Noise Impact Assessment and contaminated land survey, while the Department for Infrastructure Roads has objected due to substandard parking provision provided.

The Department for Communities Historic Environment Division; Historic Buildings has also objected, saying that there has been insufficient information provided to assess impact to Listed Buildings.

Fifteen neighbouring properties were notified and no letters of representation were received.

The Historic Buildings section has said that the development proposal, unlike surrounding buildings, is three storeys in height, which it says is ‘likely to dominate the riverside aspect of the former police station and while the development proposal is set back from the High Street, it may also loom over views to and from the former Courthouse and Ulster Bank building in Market Square’.

It was noted further that the planning application was not accompanied by an application for either Listed Building Consent or Conservation Area Consent, which are required relevant to the demolition of certain parts of the rear returns of the two buildings contained within the application site.

It is considered that given the layout and arrangement of development, along with the scale, form, massing and alignment of the proposal, that the development would not enhance the character and appearance of the area as the proposal ‘does not rest comfortably with the distinct character of this part of the conservation area’.

Planners also found that the development proposal, being three storeys in height, is not sympathetic to the characteristic built form of the area and that the proposal does not display a scale, form or materials and detailing which respect the adjoining buildings in the area.

A report due before the committee said that while it was not possible to gain access to the lands to the rear of the public house, which is one of the parcels of land incorporated within the application site area, it is considered that a number of trees would appear to exist within the site which may be affected by the proposal.

Given that these trees are within the Conservation Area they are protected from felling.

Planning officers said that no Conservation Area Consent application has been provided to the council for assessment and there is no indication in the submitted block plan that the trees are to be retained.

They considered that the development would neither preserve nor enhance the character and appearance of the Conservation Area and that not enough open space would be available for residents of the apartments - in fact 80% less than the recommended guidelines.

It was considered that given the highly accessible location of the development proposal in the town centre, the criterion of fitting in with walking and cycling routes applied and that no other residential properties would be overlooked.

It is considered that given the town centre location of the development and that it would be viewable from the Dublin Road and the boardwalk at the rear boundary of the application site, that the development ‘will be subject to informal surveillance which promotes safety’.

With the development proposal seeking full planning permission for a total of fifteen apartments in the form of 12 one bed units and three two bed units, it requires 19.5 car parking spaces.

The report said that a submitted plan identifies five car parking spaces, which is an approximate 75% reduction in parking provision when compared with the required parking standard.

The agent told planners that the five car parking spaces provided are based on expected car ownership or parking necessities for future residents.

The agent selected two consecutive days, Monday and Tuesday, within the month of September 2021, where parking availability at a range of places within Antrim town was surveyed to determine capacity to accommodate the remaining 75% of the parking provision that is required to serve the development proposal.

It was noted that car parking demand at those times is likely to be very low which impacts the validity of the results provided.

The figures did not account for car parking demand at busier times of the day or on other days that might normally draw more people into Antrim town centre, or in other months.

It is also noted that several of the car parks were quite some distance away from the application site and measured ‘as the crow flies’.

It was considered that these parking locations are a significant distance away from the application site and would not be feasible particularly for those who are elderly.

While it is accepted that there may be available car parking capacity on Market Square it is noted that the agent himself has provided photographic evidence that these spaces are available for limited times only.

While the agent also makes reference to the proximity of Antrim Bus and Train Stations it is noted that these facilities are some 750m away from the application site ‘as the crow flies’.

The agent goes on to state that with these amendments he would query the need for a NIA.

It was considered that the agent has failed to provide the information requested by the EHS and it has not been demonstrated that the development proposal would be impacted upon by high noise levels associated with the operation of the public house.

However the agent refused and asked for justification, noting that no other applications within the vicinity or closer had been asked to submit a report and he was not going to put his client to the expense.

In its consultation response NI Water has indicated that due to the sewer network being at capacity in the Antrim catchment and sewer flows spilling into the environment, NI Water is recommending that no further connections should be made to this network.

Finally, given that the development proposal seeks to demolish portions of the rear returns of buildings within the Conservation Area, a Conservation Area Consent for demolition is required to accompany the planning application - but despite a request, no such application was submitted to the council.