Man killed in arsenic tragedy - but did doctor allow him to die? 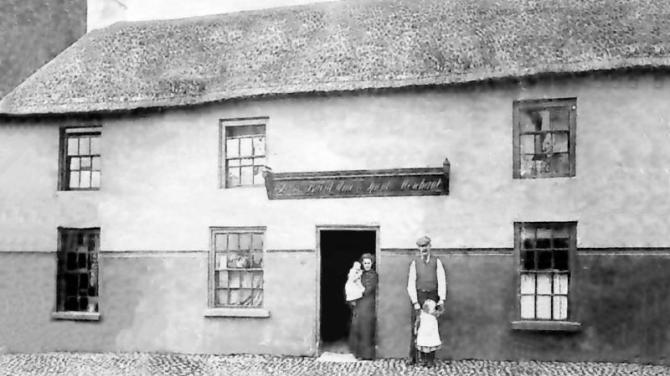 JUST a few days before Christmas 1906 the people of Antrim woke to the shocking news that they had lost one of their own.

Joseph Young lived with his mother on Church Street, and while he was known to enjoy a drink a tad more than was good for him, the 40-year-old farmer was ‘very well known in district and was most respectably connected’.

But sadness turned to shock when there were whispers that he had been poisoned - and then to horror when it was suggested that an eminent local doctor could have prevented the tragedy.

The inquest was convened the following month and there was standing room only in the town’s courthouse as the Coroner swore in a jury to determine what had happened on that cold December day.

Newsmen were there too to record what one branded, somewhat luridly perhaps, ‘An Antrim Sensation’.

“The scene in the courthouse was a very striking illustration of the attraction which sees a tragedy as that investigated has for the public,” said one scribe.

“The building was packed to the doors by workers and there were a number of Magistrates on the bench alongside the Coroner, although not there for any judicial purpose.

“Every person remained until the very last moment almost on the hour of two o’clock, although many of them had to resume work a couple of miles away at 6am.

“They listened throughout with bated breath and sometimes open mouthed horror.

“It was a weird scene and the fitful gleam of the flickering gaslight casting ghost-like shadows on the bare, gaunt walls formed a fit setting to the terrible picture drawn of the sufferings of the wretched man for 15 hours before death brought him relief.”

Yes, such was the clamour for answers that the Coroner ruled that the hearing would continue into the night. That had never happened before, but then much about the disturbing case that was out of the ordinary.

The dead man’s mother Mary Young - ‘a feeble and elderly woman’ - was first into the dock, and it was immediately apparent that she was struggling to come to terms with the loss of her boy.

“While she was being interrogated, she wept continuously and was almost reduced to a state of nervous prostration,” noted one eye witness.

The court heard that in the weeks leading up to his untimely demise Joe had been drinking heavily - and on December 12 he returned home shortly after 3pm after an afternoon session at Mr Baird’s public house.

Mary thought it best to try and line his stomach so made him tea and cooked him a steak - both of which he refused.

“He then went upstairs, but immediately came down and went into the scullery and took a drink of water,” said Mary in a faltering voice.

“When he drank the water there was some sediment like salts in the bottom of the cup.”

She quickly rifled through Joe’s pockets and found a small bottle, and fearful he may have drank some of the contents she gave it to servant Jamie Keys, instructing him to take it to her other son Robert.

He had seen the bottle before, the previous Saturday, when Joe had applied some of the contents to a wound on his horse’s leg.

“I asked him what it was and he said it was rank poison. I told him to take care he had no cuts about his fingers.”

“I took it to the medical hall to ask the proprietor - Mr Smith - if he had supplied it,” said Robert.

“Mr Smith was not at home, so I showed it to his assistant and he said ‘I do not think the bottle was purchased here’.

“I then went to Dr Samuel Gawn and showed it to him and he told me that my brother Joe had got it from him some time ago for use on a horse. I was told that he had taken some of it and the doctor said it was not dangerous.”

Heartened, he returned to Church Street to give the good doctor’s verdict.

In his absence Joe had been vomiting violently, so Robert decided to stay for a while with his mother who had been diligently fetching him water.

By around 10pm he decided it as time to go home - but not before checking on his brother.

“He was lying quiet, but not sleeping, and he was not vomiting.

“I thought his vomiting was due to drink. I did not think it necessary to call a medical gentleman as I understood from the doctor that the contents of the bottle were not hurtful.”

An hour later Mary decided to turn in too, but she was woken at around 6am by a faint knocking from Joe’s quarters.

“I went into the room where I found him tossing in his bed and the clothes disarranged.

“He asked for a drink of water which I gave him. I went out of the room and on returning found him dead.

“Some days ago he said ‘when I die bury me in Muckamore’.”

“I saw him in his own trap opposite the gateway. I asked him what the bottle contained and he told me that it was some kind of rough arsenic, not refined and for a horse.

“I told him that he didn’t tell me that last night.”

And what was his reply?

“I think he drove down to the barrack,” said Robert.

So why had the family not been told? Only one man knew, and he was next on the stand.

Dr Samuel Gawn told the court that he had known the deceased for several years.

“He took drink freely at times, but unless he took it to excess it did not show on him,” he said.

He recalled giving Joe the arsenic, adding that there had been no charge since it was for the local man’s horse.

Dr Gawn also remembered Robert enquiring about the bottle on the eve of his brother’s death.

“I saw that some had been taken out of it. He told me what his mother thought about him taking the powder, but I did not think it was likely he would do it.

“If I had believed he had taken any of the bottle, I would have considered it dangerous.

“When he was going away I said to him ‘He has taken none of it, you will see, he will be alright’.

“I am quite positive I never said it was not harmful and would not injure a child. I never said that for I had the bottle in my hand and there was sufficient in it still to kill 10 men.

“I knew Joe Young and was quite convinced he had taken none.

“I was quite convinced he had not taken it at all. If I had thought there was any necessity I would have been running as fast as I could.”

Tragically, he was wrong - and under cross-examination by the Coroner, further cracks in his story were laid bare.

Why, for example, had he not marked the bottle as a poison? The doctor said he had no such label as he did not trade in ‘what were called poisons’.

But why did he decide not to tell Robert about the contents when he first showed him the bottle on December 12?

“He never asked me,” came the reply.

“I had nothing to hide from him. I would have told him instantly if he had asked.”

The court also enquired why Dr Gawn had decided to pocket the bottle when it was produced by Robert Young.

“He brought the bottle to me.”

Yes, but why keep it?

“Well, to make sure there was no more taken. Isn’t that a safe way of doing it?”

But what about Joe’s safety when his mother feared that he had taken what Doctor Gawn knew to be a powerful poison?

“Don’t you think, now all is over, that it would have been a wise and prudent thing to have gone up that night with Robert?” asked the Coroner.

“Had I thought there was anything wrong I would have been there whether I was asked or not,” came the reply.

But would his intervention have made any difference.

“I don’t think so, but all the same I would certainly have tried.”

Antrim pharmacist FT Smith told the court that he too had been approached by the deceased and asked to supply arsenic - but he declined.

“I felt I would not be justified in giving Joe Young arsenic,” he said, to applause in the court.

“He was a man of intemperate habits and on account of some current gossip about his financial conditions I did it to keep myself straight.”

With the clock ticking inexorably towards midnight, the Coroner finally began summing up.

He acknowledged that the dead man was known to ‘everyone in the court’, and that the hearing had been ‘a painful one and one which they all deplored’.

At 1.40am the jury returned to give their verdict.

It was agreed that Joseph had expired on December 13 1906 at his mother’s home. Arsenic was the cause, and it had been self-administered.

The poison had been supplied by Dr Gawn in a bottle that was not ‘sufficiently and properly labeled’.

Asked if there was any neglect on the part of anyone in not having Young treated professionally, they replied ‘yes’.

They also found that Robert Young had told the doctor he had probably taken some of the substance.

So, should Dr Gawn have visited the Young homestead that day? Yes, said the jury, he should.

They added that there was no evidence of neglect regarding Mrs Young and her son Robert.

The final scathing verdict read: ‘That the deceased, Joseph Allison Young, died in his mother’s home by taking arsenic. We are of the opinion that Dr Gawn was negligent in not visiting the deceased when Robert Young told him that Joseph had probably taken some of the bottle’.

The formalities complete, the 12 jurors signed the verdict, or rather 11 - one of them affixing their mark.

Unsurprisingly, Dr Gawn protested about the findings, accusing the foreman of the jury of having ‘unfriendly feelings’ towards him.

But the people had spoken - and the verdict stood.