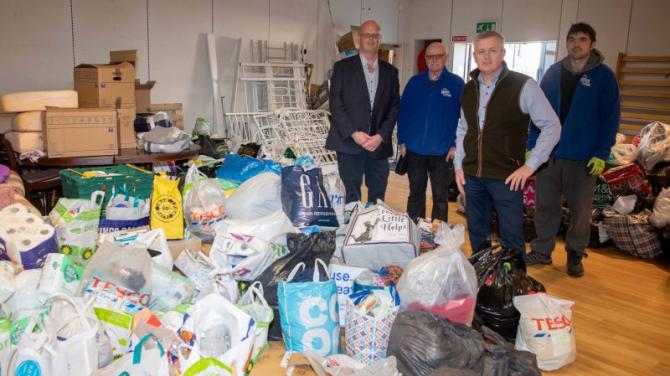 SPORTS clubs, businesses and individuals in the borough have rallied to the support of Ukranian people struggling since the Russian invasion.

Scores of families are attempting to flee to surrounding countries including Poland, Romania and Moldova with little more than the clothes they stand up in, as Putin’s shells rain down.

It is estimated that over 1m people tried to leave Ukraine since the conflict began at the end of February.

Randalstown Ladies Hockey Club organised a collection during their training session on Wednesday evening, with a lorry leaving for Poland last Thursday, thanks to McKinstry Skip Hire.

The Hope and a Future charity, which has premises in Randalstown and two shops in Antrim, one in Castle Mall, has also organised a collection.

Charity leader Christine Keenan put out a Facebook post on the first day when people were moving towards their neighbour countries.

Since that post went out, Hope and a Future said that it has been overwhelmed by the response, with a constant flow of donations into the Antrim and Randalstown shops and constant phone calls from people who wish to make their contribution.

Kevin Kevin said last week: “The charity is preparing a pallet of 35 boxes to depart from the Randalstown shop to go into Hungary to charity contacts close to Ukraine border where many refugees are arriving daily.

“The remaining very large volume of donated goods will be given to another organisation ‘Hope for Youth’ which is taking aid into Poland which has a much larger border with Ukraine.

“Today it seems that the need for support for Ukraine may be ongoing for some time to come.”

As well as items for humans, with many families fleeing with pets, some local firms also appealed for supplies for animals too.

Firmount donated their collection to Plays For Strays, who managed to raise over £5,500 and thousands upon thousands of individual items.

Country Estates offices in Antrim, and Ballyclare, served as emergency collection points for the most needed items for delivery ti refugee centres in Poland.

Antrim Baby Bank in Castle Mall was also collecting toiletries on behalf of the Ukraine appeal.

Schools and churches also got on board, with Antrim Primary School hosting a donation point.

St. Benedict’s College in Randalstown said: “We are deeply saddened by the tragic situation unfolding in Ukraine.

“We are shocked by the distressing pictures and media of Ukrainian citizens being forced to flee from their homes.”

The school hosted a collection point at the front office.

Journey Community Church in Antrim has been working closely with a pastor in Poland and is asking for donations towards helping the refugees.

Another local woman, Kinga Bialek,organised two large vans with supplies to the Ukrainian border, which left from her home in Meadowside last Thursday.