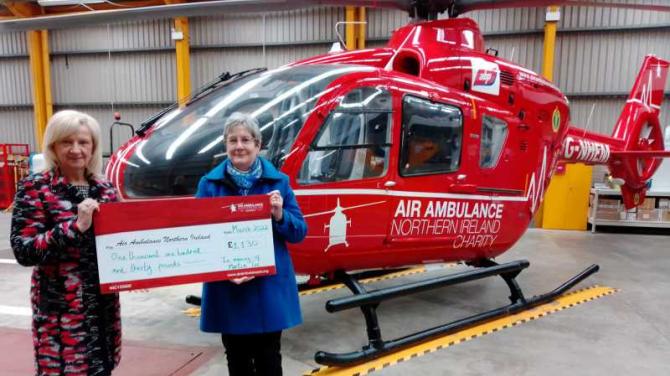 The family of the late Martin Lee, Randalstown who passed away peacefully on the 14th December 2021 have made a donation to the Air Ambulance NI Charity in his memory.

Martin’s wife Marina and sister Janet made the donation of £1130 to Air Ambulance NI as it was Martin’s wish to have donations in-lieu of flowers to the helicopter emergency medical service before he passed away.

Marina said, “Martin was a keen motor biker his entire life and he knew the benefit that the air ambulance service could make after a serious accident. He made it clear before he passed away that he wanted donations to be made to the charity service as it had been there for so many of the motorbiking community in the past.”

Kerry Anderson from Air Ambulance NI Charity said, “It was lovely to host Martin’s wife and sister at the Air Ambulance NI base recently and to accept their wonderful donation to the charity.

“This donation in Martin’s memory will help to ensure the service will continue to operate and be there for individuals with the aim of saving lives, brains and limbs. I also want to thank James Stevenson & Son Funeral Director who assisted in the management of the donations in-lieu of flowers too after Martin’s passing.”

The service brings urgent medical assistance to anywhere in the province, operating seven days a week for 12 hours per day. It can get to anywhere in Northern Ireland in approximately twenty-five minutes.

The HEMS team attend patients who are seriously ill or injured, bringing emergency pre-hospital care direct to the casualty with the aim of saving lives, brains and limbs.

Air Ambulance NI aspires to raise £2million each year to maintain and sustain this service so public donations are crucial. Find out more by visiting www.airambulanceni.org alternatively you can contact the charity directly by emailing info@airambulanceni.org or calling 028 9262 2677.