Apache brings a 'pizza the action' to Crumlin! 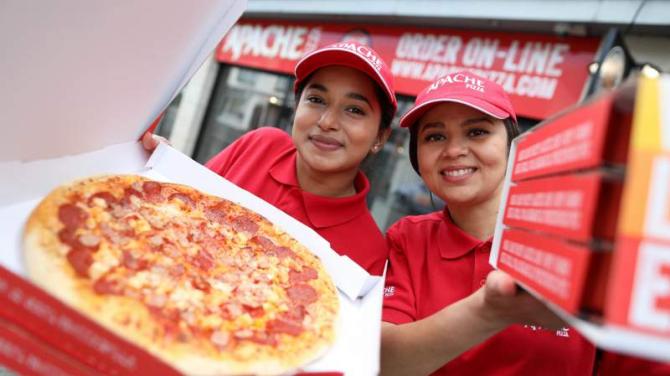 APACHE Pizza is set to expand its presence in county Antrim as it pursues a rapid expansion plan to create 400 new jobs and to open 20 new stores across Northern Ireland before the end of the year.

About 120 of the new jobs will be created in county Antrim with Crumlin, Whitehead, Dunmurry, Ormeau Road, Carnlough and Newtownabbey among the first locations to be named for new Apache Pizza store openings.

The new stores will be opened by new and existing franchisees and Apache Pizza is actively seeking local entrepreneurs from all areas of Northern Ireland to become new franchisees as part of the rapid expansion plan which is being fuelled by soaring pizza sales.

The popular pizza chain plans to open new stores in all areas across Northern Ireland throughout the year.

Some of the first locations for new store openings also include Carryduff, Moira, Dundonald, Strangford, Saintfield, Hillsborough and Comber in county Down and Portstewart in county Derry.

Local entrepreneurs who are interested in becoming franchisees and running their own company as part of the Apache Pizza chain will receive full training and operational support to thrive in their local cities and towns.

Apache Pizza is the market leader for pizza delivery in Ireland.

It operates 181 stores and employs over 2,750 people in communities all over the island of Ireland.

It currently operates 19 stores in Northern Ireland and this number is set to double to 39 stores before the end of the year.

“We are delighted to expand our presence in Northern Ireland and to create new job and new franchise opportunities in local communities.

“Being local is what is driving our growth and rapid expansion plan.

“We are looking at all areas and our plan is to open a number of new stores each month,” said Martin Lyons, CEO of Apache Pizza.

“Our pizzas are hugely popular and our online sales have grown by over 32% because we are local to homes, businesses, schools and universities.

“We are continuing to grow and expand because our stores are focused on offering Delivery and Take-Out and on making quality, tasty pizzas which can be enjoyed anywhere, at any time,” he added.

“Our rapid expansion plan for Northern Ireland provides people with an immediate opportunity to secure local employment and to develop their careers locally.

“We also have fantastic opportunities for local entrepreneurs who want to run their own business and join us in being part of Ireland’s most recognisable and popular pizza chain,” he continued.

Apache Pizza has already commenced its recruitment drive and is seeking vibrant, self-motivated people with consumer-focused experience for all positions. Entrepreneurs who are interested in becoming franchisees do not require previous business management experience. All applications can be made online at www.apachepizza.co.uk/