A life for a life - the man sentenced to hang twice 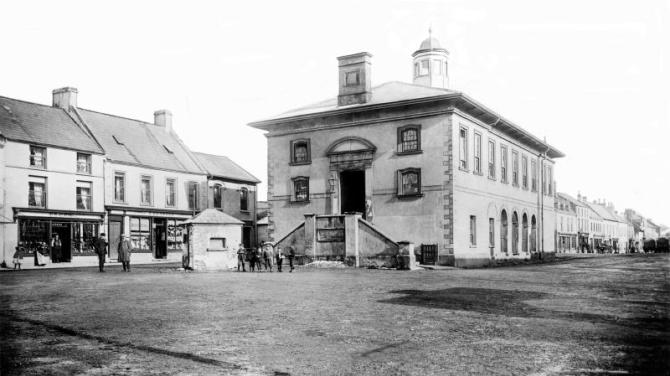 ON the morning of April 8 1930 local man Samuel Cushnan silently paced around his cell at Belfast Prison, knowing full well that by 8am he would be dead.

The 26-year-old farmer’s son had been convicted of murdering a postman near Toome - and he was sentenced to hang for it.

The condemned man had been ‘attended spiritually’ by two priests and was mentally preparing himself for his date with state executioner Pierrepoint.

On the stroke of the hour the trap door opened beneath him and Cushnan was no more.

A witness said that he died ‘with great Christian courage and charity’.

As he began his final journey, a number of women knelt down in the mud outside the prison gate and recited the Rosary.

The ‘pathetic little group’ consisted of the condemned man’s mother, brother, cousin and other relatives.

“The poor mother stood with hands firmly grasping the prison bars, and her white, worn face pressed between them,” noted one onlooker.

“As the moment of execution drew nearer she bent her head and seemed to take part in the prayers being said by the kneeling women.

“On the stroke of eight o’clock the prayers stopped and there was a deep silence for the fraction of a second.

“Then a woman’s voice in tremulous tones broke forth the hymn, ‘Jesus, Lord, I ask for mercy’.

“The other women took up the words, and sang the hymn through with great feeling. The poor mother of the condemned man collapsed, and had to be assisted away by friends.”

A distressing scene by any standard - but what had Cushnan done to end his short life on the end of a rope?

The courts decided that he was guilty of an act of cold and calculated murder.

On the morning of May 16 1929 James McCann pulled on his smart postal uniform, grabbed his trusty bike and set off to Toomebridge Post Office.

The young man had only been in the job for three months, but he enjoyed it and was quickly becoming a familiar face on his rounds.

He arrived in Toome at 8.30am and collected the mail along with £66 in 10 shilling notes which were payments for old age pensions in the district.

Soon he was back on the road, making good time on the road to Crosskeys. He never arrived.

Shortly after 10am John Kerr was trundling by the entrance to the lane at the Harris farm on his horse and cart when he noticed something odd.

What he first thought was a pile of rags was actually young McCann, lying face down in a pool of blood. His mail bag was empty, letters strewn all around. The pension money, however, was nowhere to be seen.

Tragically, the postman died just 300 yards from his destination at Crosskeys Post Office, where his colleagues awaited his arrival.

Dr Lynam from Randalstown was summoned and he quickly established that the dead man had been blasted at close range by a shotgun. And the wounds were devastating.

The collar bone on the left side was shattered and the upper part of the lung was destroyed. A number of ribs were also fractured. Curiously, given the hour, the food in his stomach smelled strongly of alcohol.

Close to where the body was found, a half full porter bottle of poteen lay. Had he been lured up the path with the offer of an early morning dram?

Police swarmed into the area and it was soon established that a single shot had been heard at around 9.40am.

From the outset they surmised that the murder was carried out by a local who knew the route taken by the postman - and was aware that he would be carrying a tidy sum of cash on a Thursday morning.

Until early 1929 he had lived a few hundred yards from Crosskeys Post Office. He also possessed a shotgun, the barrel of which had ‘mysteriously disappeared since the date of the murder’.

Damningly he had been observed the previous Thursday morning concealing himself in a laneway on the very route that the unfortunate postal worker travelled.

On the day of the shooting his bike was observed hidden further up Harris’s Lane. It later disappeared.

Cushnan was seen at 10.25am walking quickly along the road to Ballyscullion. His boots were wet though the road was dry and when greeted by two local ladies, he did not stop for his customary chat.

“Sammy, you are in a hurry today,” said one.

Later he told police that he had been working at a bog on the day in question. He arrived, he said, at around 9am and stayed there until after 11am.

This was contradicted by two men who had been labouring there, who recalled that he had arrived at 11am and promptly left after a few minutes.

Two days later a small piece of cloth was found fluttering from a briar bush near the murder scene. It was examined by Frederick Bradbury, a Fellow of the Textile Institute. He said the distinctive material matched a coat provided to him. It belonged to Samuel Cushnan.

A strong circumstantial case was emerging and on May 29 he was arrested.

There was huge public interest when he made his first appearance at Antrim Courthouse in July before George McElroy - though some struggled to see him at all.

The prisoner was not a big man. Indeed he ‘could not be seen by the presiding Magistrate when sitting in the dock, so small is his stature’.

A solution was soon found, and Cushnan was given a chair just outside the railings so he could observe proceedings.

The court concluded that there was indeed a case to answer and it was sent to trial, sitting in Derry in December.

The jury was divided, however, and they could not come to a verdict - so a re-trial was ordered in Belfast the following March.

There, after four days and 50 witnesses, the Crown got the verdict they sought. It took the jury just one hour to find the local man guilty.

Asked if he had anything to say as to why a sentence of death should not be passed on him he replied “I have nothing to say.”

The Judge said that he concurred with the verdict, adding that no-one could say it was ‘not fully justified by the evidence’.

Cushnan displayed no signs of emotion as the Lord Chief Justice donned the black cap and turned to address him directly.

“The sentence of this court is that you will be taken from here to the place from whence you came and there be kept in close confinement until April 8 1929, and upon that day that you be taken to the place of execution and there hanged by the neck until you are dead,” he said.

“And may God have mercy upon your soul.”

Cushnan was taken from the dock and returned to his cell - but not for long.

Accordingly, the condemned man had to be returned to the dock and sentenced to death for a second time.

The defence, quite understandably, seized upon the error and tabled a petition for a reprieve on the grounds of the ‘mental anguish’ the astonishing turn of events had upon him.

It was denied. There had, after all, been precious little mercy for James McCann.

In 1965 the Murder (Abolition of the Death Penalty) Act came into force, effectively ending capital punishment in Great Britain - but not in Northern Ireland.

For while the last execution in the province took place in the Crumlin Road in December 1961, it remained an option for the courts until 1973.

Indeed, that very year 19-year-old William Holden was sentenced to die for the capital murder of a soldier. It was later commuted to life imprisonment.