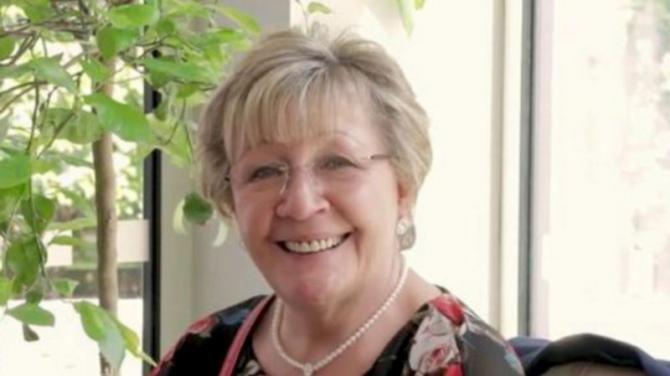 DONEGAL crooner Daniel O’Donnell dropped into Antrim at the weekend to honour a local grandmother on the second anniversary of her death, performing at a memorial mass and leading an impromptu singalong in a local bar.

Jackie Ward (pictured below) died on March 28 2020 at the age of 62 following a short battle with ovarian cancer.

Her passing came just days after Northern Ireland entered lockdown at the start of the pandemic.

Because of the restrictions, her family - including husband Gerry and three children Lisa, Ricky and Barry - were unable to have a funeral mass and a wake due to the very strict restrictions in place at the time.

But two years on, Jackie finally got her request of a good send off with the help of the famous singer.

Daniel, who is a friend of Jackie’s family, sang at her memorial mass at St Joseph’s in Antrim on Saturday evening.

And having flown in from Tenerife especially for the occasion, he didn’t stop there.

Later at a celebration of her life, held in Rococo Wine Bar in the town, Daniel sang for a further two hours.

With framed pictures of Jackie and home videos projected on the wall, the hitmaker got her family and friends in a celebratory mood as they remembered her in song.

Jackie was originally from Waterford and one of her sisters, Loretta, worked as Daniel's PA for many years until she retired.

“Daniel sang a few hymns in the chapel earlier that evening and while he was sitting having a bite to eat afterwards, he was coaxed up to sing.

“Someone had already said that once he got up there, he wouldn't stop and that's exactly what happened.

“He stayed up there for two hours and really had the crowd going singing many of his greatest hits - it was just brilliant.

“As someone who wasn't a massive fan before he's now a legend in my view for doing that for Jackie's family!”

Adrian added: “It was just so fitting as Jackie was always the life and soul of the party and had travelled the world.

“Her funeral two years ago was one of the first in lockdown.

“Her remains were taken straight from the home to the cemetery and the gravediggers were in hazmat suits.

“So it was pretty emotional in the chapel on Saturday as we had the chance to say goodbye to her properly and Daniel’s impromptu performance afterwards made it the perfect evening.”

Jackie’s proud daughter Lisa told the Antrim Guardian: “Daniel gave my mum the best send off on Saturday night in Mass and then Rococos.”

She said that his visit was a real tonic after the circumstances of her mother’s passing and funeral arrangements.