A bridge too far! 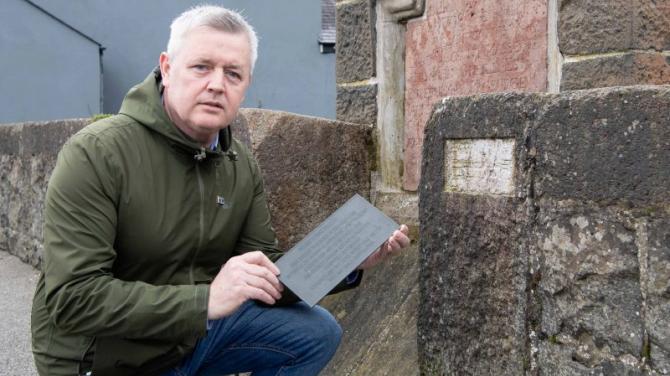 VANDALS have struck at the very heart of Antrim’s heritage by prying a heavy metal plaque off an historic bridge in the town and discarding it like a piece of rubbish.

The six-arch Massereene bridge was built in 1708 by Viscount Massereene and John O’Neill under the supervision of George Jackson and Alexander Cornwell; it was repaired and widened, on the west side, in 1857 by the contractor William Vance, presumably to the designs of Charles Lanyon who was County Surveyor at the time, in charge of public buildings, roads, and bridges.

As well as an old stone inscription, there was a contemporary commemorative plaque recording the building of the bridge, with a later inscription of 1857 added to it.

This was item ripped from the structure and thrown away into undergrowth on Dublin Road, where it was found by a member of the public, who handed it in to Paul Michael, the Ulster Unionist councillor and chairman of the Antrim Branch of the Royal British Legion, which faces the bridge.

He is also running as an assembly candidate for South Antrim in the May elections.

Alderman Michael recent featured in the Antrim Guardian retrieving a vandalised bike stand from the Six Mile Water river, but says this latest incident is beyond the pale.

“It’s one thing smashing up a bus shelter or ripping up a bike stand, that is bad enough, but to target the history and heritage of this town is just going too far.

“This was a heavy plaque which was on this bridge for longer than most of us have been around and it would have taken some form of effort and pre-meditation to do this.

“I can’t thank the local resident enough for their quick thinking and public spirited action, in finding this plaque, realising its importance, recovering it and bringing it to me for safekeeping.

“I hope in the coming weeks we can make arrangements for the plaque to be reinstalled and bolted on so that this cannot happen again.

“To whoever did this, I ask them to stop and think about their actions and ask themselves what is so lacking in their life that they have to stoop so low as to target a historic structure like this, which is so important to the people of Antrim.

“This is not just anti-social behaviour, it is pure cultural vandalism.”