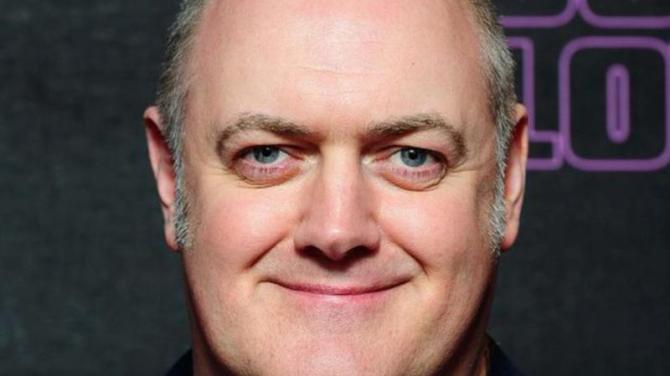 DUP man Trevor Clarke’s campaign to retain his seat at Stormont has received an unexpected shot in the arm - with a ringing endorsement from ‘Craic Dealer’ Dara Ó Briain!

It all started when one of the Irish comic’s 2.5 million Twitter followers noted a resemblance to a certain politician from Randalstown.

“Is this a new career path you’re trying?” asked Paul McCourt, alongside a shot of one of Trevor’s election posters.

The question clearly tickled the funnyman, because he responded - in the affirmative.

“Getting this a lot this week,” he said.

“Yes, of course it’s me, so give me your vote so I can do that thing with the border and Stormont that you’d expect.”

One wag even commented that Mr Clarke was indeed Dara’s ‘DUPlicate’.

Even Trevor got in on the act.

“See how this election goes,” he replied to the Mock the Week star. “If I’ve spare time I could be your warm up act.”

Sadly, his comment did not do the same brisk business on social media, generating just three likes - one of them from himself!

It is not the first time that the local rep has ‘gone viral’ online.

In the super-sensitive world of social media, it is not unusual to witness the unedifying spectacle of a user reaping the whirlwind after a careless or ill-judged comment.

It is a blood sport too, with keyboard warriors from around the globe joining the hunt to take down the ‘dinosaur’.

Make no mistake, it is a ‘woke’ old world out there.

But imagine waking up to discover that you had somehow become embroiled in a war of words with someone with millions of followers. Imagine crossing swords with Elton John!

Well, that fate befell Mr Clarke six-years-ago - and while the DUP man may still be standing, he undoubtedly saw the power of the pack.

So how did the Randalstown rep find himself in the eye of a media storm?

Well, it seems he was just a bit too honest for his own good!

He had been briefed by a charity a few days previously about AIDS, and it proved to be eye-opening encounter.

Until then he had thought that only members of the gay community could contract the condition. Armed with his new insight, he told the chamber about the gaps in his understanding during a debate on a new awareness campaign.

“When I came here in 2007 I would have dismissed the possibility that I would speak about HIV today,” he told fellow MLAs.

“I was one of those who did not understand the stigma attached to it.

“I have to put on record my thanks to Jacquie Richardson from Positive Life. Meeting her for the first time was a turning point for me, having been ignorant of the fact that the disease also affects heterosexual people.

“For that reason, I have no difficulty supporting what the Motion calls for. The work that Positive Life did in changing not only my opinion but that of many others helped to remove the stigma.”

The media seized upon his extraordinary confession. But there was worse to come. Much worse.

Within three days Mr Clarke’s candid comments had reached the ears of the super-star - and the ‘Rocket Man’ proved that any night’s alright for fighting when it comes to a cause so close to his heart.

Elton lost many friends to HIV, and his Aids Foundation had raised over $200 million dollars for research and education programmes. So to hear that a senior politician had yet to grasp the fundamentals was a red rag to a bull.

Mr Clarke may have humbly admitted his mistake, but Elton was having none of it. Sorry, it seems, really is the hardest word.

Asked about the myths still surrounding the condition, he said he was ‘not surprised’ by recent events ‘on the hill’.

“A Northern Ireland politician said the other day he didn’t know that heterosexual people could get Aids or HIV,” he said during a BBC interview ahead of a gig in Belfast.

“So it’s like ‘What planet are you living on?’”

The barbed comment plucked the South Antrim rep from relative obscurity to the source of global gossip - and as his comments went viral, the hate mail arrived thick and fast.

“It’s constant and some of the messages I’ve been getting are vile, I’ve just stopped reading them,” the shaken MLA told the Antrim Guardian.

“It’s ironic that I was supporting a motion to promote awareness, but instead I’ve been castigated as backward and a homophobe. It’s a crazy situation.”

And that irony was not missed by the straight-talking Randalstown rep.

“I’m surprised and saddened, I suppose,” he said.

“This man has raised tens of millions for his Aids Foundation, yet he is attacking me for being honest.

“Back in the 1980s the media attention seemed to be very much on the gay community when it came to reporting Aids. I suppose that shaped what understanding I had - and I’m not alone.

“Now I’m trying to make amends for that by supporting this awareness campaign, but Elton John doesn’t see it like that. That’s a real shame.”