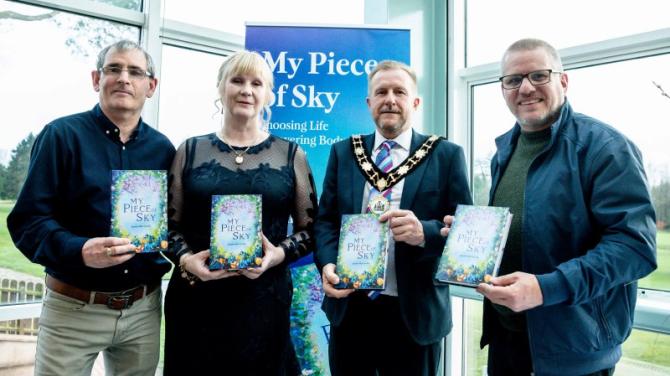 AN Antrim woman who hit the ground at 100mph in an accident 27 years ago, leaving her with horrific injuries, has launched a book about her experience.

Joanne McConville released ‘My Piece of Sky’ with an event at Massereene Golf Club at the weekend, to mark the 27th anniversary of the accident, which occurred on April 1, 1995.

She was attempting her 65th skydive at the time with her then-boyfriend and instructor Joe.

Joanne’s reserve and main parachute came out at the same time, causing them to become entangled and leaving her with ‘nothing’ above her head, freefalling from 6,500ft.

She said the accident was the ‘most horrendous’ thing that ever happened to her, adding that she didn't know if she would live or die.

She said her boyfriend tried in vain to save her before she hit the ground.

“The two of us met in freefall and I was going too low and he was trying to save me, his parachute came out but both my main and reserve came out meaning that they both became entangled and I was left with nothing above my head. I was left spiraling to the ground at 100mph and ended up with horrific injuries," she said.

Joanne lost several teeth in the fall and broke several bones in her face, legs, arms, and pelvis.

It took her a year and a half to recover from the injuries, but she was eventually able to return to work as an NHS nurse.

She married Joe two years after the accident.

Joanne said her husband only stopped skydiving 10 years ago despite witnessing her ordeal.

“This was truly a one in a million accident,” she said.

“Skydiving was like freedom. They were the most exciting three years of my life, and I’m so glad I can live to tell the tale.”

She said she was only able to discuss the trauma of the fall 25 years after the accident and said she wrote the book to detail what she learned from a near-death experience and how she picked herself up.

“My main reason for writing it is to help people in a similar situation to know that there is hope and you can come through this and you can carry on with life.”she said.

Joanne said that writing the book has enabled her to bring out the reality of the experience, the details of which have been hidden for years, from what led her to skydive, the accident and near-death experience, the ups and downs of recovery and what she has learned.

“This book will help and inspire those who are facing trauma and difficult times, but it is also intended to help others understand the complexities that can come following trauma.”

Joanne touches on subjects such as; the views of others, guilt and shame, mental ill-health and addiction, being a patient in our healthcare system and how difficult it can be when both partners have been involved in the same event and react in their own individual ways.

“You may feel that this book won’t be anything but harrowing, or a difficult read, but this couldn’t be further from the truth.” she said.

The book features wonderful memories, amusing times, the kindness and love that was always there, and ‘the unbelievable way our body, mind and spirit heal and protects us so we can recover and live a fantastic life’.

Joanne said: “The book shows it all, the good, and bad, the love story, life with on-going physical and psychological trauma, an amazing glimpse into another world and a near-death experience, that has influenced and changed my life forever.”