End of an era in Crumlin 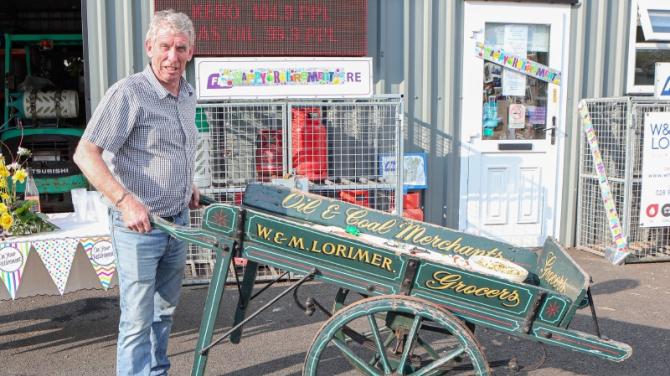 THIS week marked the end of an era for W&M Lorimer, the busy, Crumlin-based fuel business.

William, the owner has decided it is time to hang up his boots and retire after 43 years of dedicated service to the local community.

The successful local business has been bought over by Scott’s Fuels and transferred to their new fuel depot near Moira.

The history of W&M Lorimer stretches back 65 years and has its roots in the grocery trade.

In 1957 William’s grandfather, also named William, bought Kirk’s Shop in Crumlin and ran it with his son Milliken.

Milliken left his 14 year trade as an auctioneer for Osbourne King and Megran where he famously sold a plot of land at the bottom of the Largy Road to Messers Martin and Baker who would go on to manufacture their world class ejector seat from that very site.

William then joined his dad in the business part time in 1973 while at school and then later full time, after graduating in 1979.

It was from this very same shop on the Main Street in Crumlin that William convinced his father to diversify into the fuel trade and that arm of the business was born in 1993.

The shop, a VG then latterly a Costcutter, closed in 2007 and the home heating, agricultural and commercial fuel business moved to the top of the Largy Road, from where it has been a hive for the local community ever since.

The family business made it their mission to truly value their customers and they in turn rewarded them with their loyalty, with an extensive customer base which stretched from the base in Crumlin and took in Antrim, Glenavy, Templepatrick, Randalstown, Nutts Corner and Moira, even extending as far as Larne, Belfast, Banbridge and Crossgar.

On his retirement William said: “My sincere and heartfelt thanks must go to the local community for their amazing support over the four decades I have been involved with the business and for the twenty five years before that.

“I feel very privileged to have served them through our family business for such an extended stretch and to have made life-long friends along the way.

“Speaking of friends, I have been fortunate to have had the best team of staff working alongside me, some for almost 40 years.

“Without them, W&M Lorimer could not have operated for so long and become so well-established in the community.

“It is now time for me to retire, I’m planning to set sail for holidays in my camper van with my wife Vanessa and to spend quality time with my four lovely grandchildren who I know will certainly keep me busy!”

Some of the amazing, existing team of staff will be joining the Scott’s Fuels team, including Shirley, Elaine and Terry.

Congratulations go to local Crumlin-man and familiar face from the distinctive blue lorries, Jim Kennedy who retires alongside William.