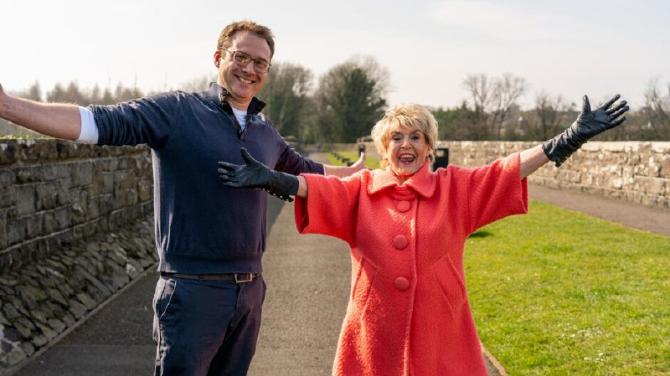 THE transformation of Randalstown in recent years has been truly extraordinary and the many awards and accolades richly deserved - but when Gloria Hunniford rocks up with a One Show crew you know something big is in the offing!

The eyes of the nation turned on the town on Tuesday when the broadcaster announced that the magnificent former railway viaduct, which spans the River Maine, will become the next Royal Horticultural Society Community Garden for local people to relax, garden in and enjoy.

The RHS is creating four new Community Gardens, one each in England, Northern Ireland, Scotland and Wales, to share the joy of gardening as part of its celebrations for 2022 RHS Garden Day on Monday May 2.

Tidy Randalstown, who applied to the RHS for the Northern Ireland Community Garden, are a tireless band of green-fingered volunteers - and they have driven many of the environmental improvements.

Northern Ireland’s leading garden designer Johnny Knox, will be designing and building the garden liaising with the community, on the local ladnmark which is now a well-used recreational pathway.

The group’s vision is to create a symbiotic relationship between a working garden and a world class amenity for locals and visitors, similar in concept to The High Line in New York.

The garden will offer a mix of sustainable, pollinator-friendly planting, providing year-round interest, extended bee corridors, seeds and berries for birds, and shelter for hibernating species.

The group say the garden will be the first of its type on the island of Ireland.

They plan to establish an intergenerational team to maintain the site, broadening the local skills base and furthering their visibility in their current role of engaging and helping vulnerable people in their community.

Helen Boyd, Chair of the Tidy Randalstown, said the town was ‘buzzing’.

“Everyone here in Randalstown is absolutely delighted about this project,” she beamed.

“As well as being an exciting and distinctive garden on such a magnificent site on the former railway viaduct, the garden will provide an important restorative space for the people who live in the area.

“Being away from busy roads with its pure air and beautiful plants, means everyone will wish to meet here and linger. At the moment we don’t have any open green space in the Town, so this will be a vital and much used important place for the people of Randalstown.

“People’s well-being will benefit from the sights, scents and sounds which greet them in this suspended garden.”

Designer Johnny Knox heartily agrees - and he is relishing the challenges that lie ahead.

“It’s not every day you get asked to design a garden for a spectacular viaduct. It’s such a unique and dramatic setting but, more importantly, it’s an incredible privilege to work on such a cherished local landmark for the people of Randalstown.

“What’s most exciting is a vibrant garden in this setting has the potential to transcend and give back more to the community than what the viaduct could in its original form.

“The community gardening group here do a huge amount to bring different generations together through gardening, from local schools brightening up the care home with plants, to creating pockets of green spaces for people to reflect in.

“I have made sure this new community garden is a restorative place with seating and areas for people to get together and facilitate workshops.

“There are also elements to give a nod to the history and original function of the site. By using brass arches shaped in the scaled outline of an old railway carriage I hope to emulate something of the grandeur associated with this era of transport.

“I look forward to it being enjoyed for generations and seeing it expand and grow in time.”

Mayor Billy Webb paid tribute to the hard-working team behind the bid.

“I am very proud that Tidy Randalstown is the representative from Northern Ireland,” he said.

“They are worthy winners and their focus, commitment and determination is being recognised at every turn.

“I am proud of the group, the town and proud that we here in Antrim and Newtownabbey will get national coverage which will clearly show community spirit in action.

“In Antrim and Newtownabbey Borough Council we are very focused on improving our towns and villages.”

SDLP Councillor Roisin Lynch agreed that the new garden will be ‘a fantastic asset’.

“I’m delighted to see that Tidy Randalstown have been awarded funding from the RHS towards their community garden project,” she said.

“This group contributes so much to our community through their efforts to keep our spaces looking clean and tidy and I’m glad to see their efforts have once again got the recognition they so deserve.

“The Viaduct Community Garden is going to be a great asset to Randalstown. The unique idea to turn this well-known former railway viaduct into a green space will be a huge boost to this area, creating a new place for people to enjoy and for those who live outside this area to come and visit.

“During the coronavirus pandemic we all came to realise how important our green spaces are. They can be used for everything from socialising to exercising and help to protect our environment.

“We are lucky to have groups like Tidy Randalstown in this community to maintain our existing spaces and develop new ones like this garden.”