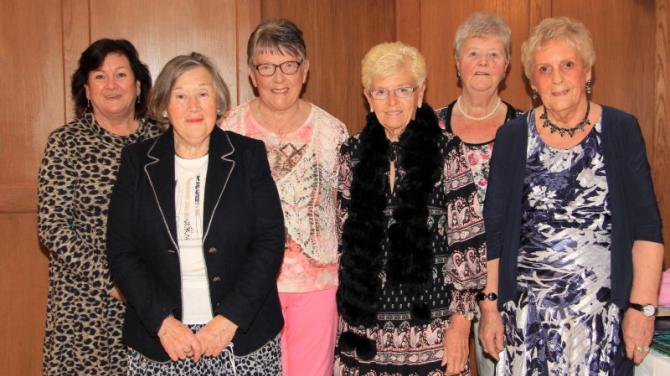 A WELCOME reception was held as the ladies from Muckamore Women’s Institute met in the Dunadry Hotel to celebrate their 70th Anniversary.

The tables were decorated with beautiful flower arrangements arranged by Marlene Watt and Mary Thompson.

Evelyn Fleming, one of the longest serving members, said Grace before the delightful meal.

The Anniversary Cake was baked by member Jennifer Johnston and tastefully decorated by her daughter Deirdre. This is the fourth Anniversary cake that Jennifer has baked, and Miss Margaret Torrens helped Elizabeth cut the mouth-watering creation.

The Toast to the Federation was proposed by President Elizabeth Gray.

Afterwards the entertainment for the evening was ‘Down Memory Lane’.

Roberta McCullough wrote and delivered a narrative poem en titled ‘Our WI’. This included details of memories and events that the ladies had taken part in over the past 70 years.

Molly Stewart spoke of the memories over the years, and had members laughing at the situations that they had gotten into. Elizabeth McConnell spoke about the achievements of the Muckamore WI choir and the fun times when performing at the Music Festival.

The President then gave a tale of the Muckamore Drama Group and all the plays that had been entered into the Drama Festival and performed for various charities.

Following that Lesley Allen then gave a PowerPoint picture presentation on Muckamore WI with images from the past 70 years, with many fond memories being recalled as the saying goes, a picture is worth a thousand words, but a memory is priceless.

The Ladies enjoyed browsing through the Scrap Books which had been produced down through the years and enjoying the ‘Walk down Memory Lane’.

The evening finished with Mrs Margaret Dean Proposing a Vote of Thanks to the Committee for a brilliant evening and to all involved in the entertainment.

Muckamore WI wish to thank those who sent cards and helped to sponsor this event.

Next event is Saturday April 23 at 10am, meeting at Clotworthy Antrim.