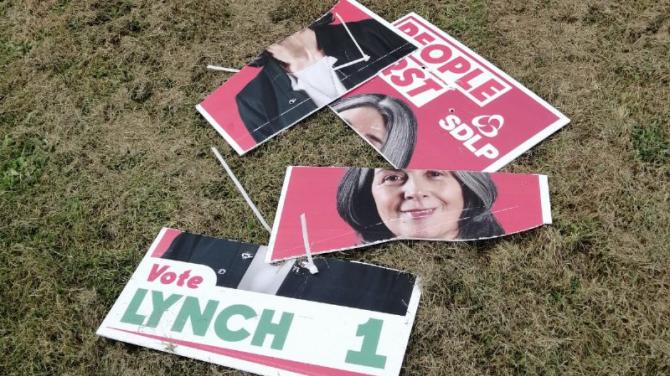 A WAR of words has broken out between two Assembly hopefuls after election posters were damaged in Templepatrick.

She said: “South Antrim needs every MLA opposed to any attempt to reintroduce the refused Hightown Incinerator in our area.

“Trevor Clarke DUP is the only MLA to support the incinerator.”

She also appeared in a film with her party leader Colum Eastwood to take aim at Mr Clarke.

While there is no proof of any link between the two incidents, Mrs Lynch’s election posters were later torn down in Templepatrick.

Mr Clarke has vehemently denied any involvement from him or his supporters.

Roisin Lynch has expressed her ‘disappointment’ after a number of her election posters were removed and destroyed.

The incident occurred on the Templepatrick Roundabout.

It follows a number of attacks on SDLP election materials across Northern Ireland - and Mrs Lynch again singled out the DUP in her remarks.

“I was deeply disappointed to see a number of my election posters removed and destroyed in the Templepatrick area.” she said.

“During my time in a I have strived to be a representative for every community in our area and while it’s very disheartening to experience this, I won’t be deterred in my quest to be an MLA that everyone in South Antrim can be proud of.

“It’s particularly striking that my posters were destroyed, while those from a DUP candidate were left untouched.

“People in this area have a clear choice, they can vote for me and a brand of progressive politics that wants to deliver on the issues that really matter to families in our communities, or they can vote for the DUP who collapsed the Executive when people needed them most, to save their own skin.

“The climate of this election has been very worrying and we need to see political leadership to calm the current tensions that are having a negative impact on this campaign.

“The SDLP and other parties have seen a number of our posters removed and we have seen candidates intimidated and one even being attacked.

“We need to see an end to this nonsense so we can focus on dealing with issues like the cost of living crisis which is placing families across the North under serious pressure.”

Responding to an initial post on Twitter, Mr Clarke, who said that SDLP party supporters had already implied that DUP supporters had targeted SDLP election literature in the past, wrote: “I hope you’re not accusing me or my team again?

“I wouldn’t support any candidates posters being removed or vandalised!

“My full support is with the PSNI to find those responsible for this crime.”

Mr Clarke said that some of his own posters had been removed or damaged in recent days and his team had resorted to using double-extension ladders.

“These things happen in elections and posters erected at head height are always at risk of removal, damage or having moustaches or slogans drawn on them!” said the outgoing South Antrim MLA.

“If you put the posters at a reasonable height, my team is using double-extension ladders, there will be less chance of them being targeted.

“This is a continuing campaign against me, where I am being accused of things I am not guilty of.

“My posters have been taken down, I am not contacting police, I am not accusing anyone or blaming anyone.

“If the SDLP is engaging in progressive politics, perhaps they should stop focusing on me and focus on what it is they are actually going to do.”

Turning to SDLP Infrastructure Minister Nichola Mallon, Mr Clarke blasted: “Maybe Councillor Lynch could ask the Minister for potholes and sub-standard roads could do a bit more for taxi-drivers who have been left on their knees by the pandemic, or those waiting weeks and months for MOTs and driving tests.

“The SDLP talk about putting people first - some of us put all people first, both born and unborn, unlike some members of their party.

“I have a good track record of helping everyone who comes into my office, I enjoy support from across the community and I hope to continue enjoying that support if I am re-elected.

“I would also like to remind everyone that I am the only political candidate who has maintained an office in Antrim town, serving the people in this end of the constituency, since 2007, making sure they have representation and help.”

Ulster Unionist candidate Paul Michael, who lent his support to Mrs Lynch over the poster vandalism, said that he had been contacted by police after his own placards were damaged.

“I was contacted by police who told me an eyewitness had contacted them about youths removing my posters,” Mr Michael told the Antrim Guardian.

“I was given a crime number, but I told the police that these things happen and I did not want to waste their time with the matter.

“While it is obviously wrong and an attack on democracy, these things often happen during elections and the police have other things to be doing with their time and resources.”