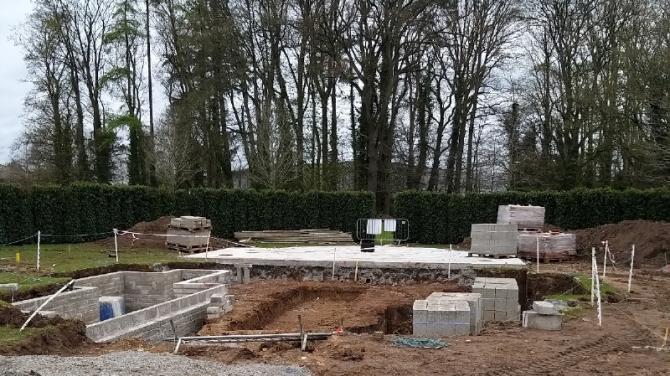 A LOCAL man has hit out at the council’s plans for a new ‘show garden’ at Antrim Castle Grounds, calling it ‘an environmental hell’.

In March, Antrim and Newtownabbey Borough Council told the Antrim Guardian that planning permission would not be required for the new ‘permanent’ installation, which has been designed by celebrity gardener Diarmuid Gavin.

Mr Gavin has been working with the council on the centrepiece for the Garden Show Ireland event, which is returning to Antrim from 29 April to 1 May 2022 for the first time since 2018.

According to an ‘in confidence’ item at a recent council meeting, Mr Gavin was invited to be part of the show in 2022 both as a ‘garden personality’ and to create a ‘Chelsea Flower Show’ standard installation for not just the event, but also as ‘a permanent new attraction in Antrim Castle Gardens on the 10th anniversary of its refurbishment and 100th anniversary of the Antrim Castle fire’.

Mr Gavin presented a proposal for a ‘Clockwork Garden’ to the Mayor, Deputy Mayor, Party Group Leaders and reps at Antrim Castle Gardens in January 2022, to be located in what is described as ‘the events field’.

Minutes describe how ‘the garden comes to life and puts on a performance every 15 minutes when trees will dance and many other elements will turn and move’.

The report said: “A similar ‘show garden’ designed by Gavin for the Chelsea Flower Show won awards, was visited by Her Majesty the Queen, drew thousands of spectators and huge critical acclaim.

“This garden will be the only one of its kind to be installed permanently in any location.”

Meanwhile, members were told that there was an opportunity to link the Clockwork Garden proposal with the Queen’s Platinum Jubilee and the Queen’s Green Canopy tree-planting initiative with a ‘Dancing Trees for the Jubilee’ theme, providing “a lasting legacy to mark this significant occasion, which is unlikely to be repeated.”

However concerns have been raised about the ‘permanent’ aspect of the installation on a site which enjoys certain environmental and heritage protections.

While the costs of the project were redacted, it was noted that 50% could be covered ‘by the show garden and celebrity gardener budget allocations’ in the Garden Show Ireland 2022 allowance and from the income surplus generated by the 2021 Enchanted Winter Garden event.

It was said that the remaining 50% ‘can be capitalised with a payback period of five years anticipated, which can be met by future anticipated surpluses from Enchanted Winter garden’.

The report said that Diarmuid Gavin was engaged via the Direct Award process, ‘which permits procurement without quotations being sought where the works, supplies or services can be supplied only by a particular supplier as the aim of the procurement is the creation or acquisition of a unique work and to ensure the protection of exclusive rights (including intellectual property rights)’.

A spokeswoman for the council said: “Work commenced immediately (council) approval was given.

“We are working with Diarmuid to finalise the schedule and will be able to confirm shortly when he will be onsite.

“Planning permission isn’t required for this form of landscaping.”

Council said that the National Lottery Heritage Fund, as a main funder of the original refurbishment of the gardens a decade ago, will be updated on the plans ‘which will complement and enhance the refurbishment they supported’.

Asked about Mr Gavin’s fee, the spokeswoman said: “Unfortunately we are not in a position at present to release the fees, as it is commercially sensitive.”

Now, writing in his blog, former Ulster Unionist councillor Stephen Nicholl has said that the development in the gardens is ‘heartbreaking’.

“A few years ago I nominated Antrim Castle Gardens for an award from the Fields in Trust charity and this wonderful legacy for the people of Antrim was named the best park in Northern Ireland in 2016.” he said.

“It is a special place to me and that is why what I witness now is so heartbreaking.

“If you park in front of Clotworthy House to the right was a green open space, it was safe and while occasionally used for temporary events it always returned to its multi-purpose people space.

“Families picnicked, toddlers toddled, children kicked their first football or caught their first frisbee, it was a priceless space to those who used it.

“For some in authority however it was valueless and value could only be added by concrete and structure.

“The site has been bounded by Portugal Laurel, a non-native species whose leaves are apparently considered poisonous releasing cyanide when burnt or crushed.

“What was open and safe is now closed and unsafe.

“Throughout the Castle Gardens run drainage channels, vibrant areas so recently filled with frog spawn, now tadpoles and froglets should grow, along whose banks ducks will nest.

“Those who care for none of this see only somewhere to dispose of the waste from the construction site.

“Where flora and fauna flourished there is only the dead space of cement washings.

“For Antrim and Newtownabbey Borough Council the measure of success has been obtaining the services of a ‘big name’ garden designer.

“While the Garden Show has been a good temporary attraction its value was always that things would go back to normal, but no longer, the drive to develop more, more often, more permanently destroys the heart of this precious resource.

“Elected representatives may have been sold a picture of heaven, what has been delivered is environmental hell.”

The Chelsea Garden Show project, the ‘Garden of Pure Imagination’, was installed on a temporary basis in Dundrum centre’s Pembroke Square in Dublin after taking pride of place at Chelsea in 2016.

The garden’s flowerbeds span around on a carousel, window boxes slid up and down, and trees twirled around.

It was inspired by the Willy Wonka song, ‘In a world of pure imagination’ and a moving clock created by Guinness in the 1951 Festival of Britain.

Speaking to the Guardian after the launch of Garden Show Ireland at Castle Gardens last month, Mr Gavin revealed that the Antrim installation drew from similar inspiration.

Mr Gavin said that he was thrilled to be back working in Antrim and is working alongside students from the CAFRE campus at Greenmount and a local engineering firm to realise the show garden project.

“My inspiration for the garden comes from some of the UK’s most imaginative minds, resulting in an active, entertaining and playful space.” he said.

“Every 15 minutes the garden actually comes to life and engages in a short performance which certainly surprises spectators and creates a few smiles.

“It has been my dream to bring it home to where it belongs and Antrim Castle Gardens is that place.

“Antrim Castle Gardens is unique in Europe, not just Ireland or the UK.

“I have been visiting for a while to get a feel for the place, the heritage and the architecture and particularly to see how local people use the gardens.

“The 1951 Festival of Britain was a postwar expo of makers and designers, the Guinness Clock put on a show every 15 minutes, the popular characters like the toucan and the zookeeper would pop out.

“I wanted to create a garden that would bring people together, something like you would see in a Wallace and Gromit film.”

Mr Gavin said that there would be an ‘octagonal folly’ and a sunken Italianette pool, while box ball hedging and bay trees would move up and down and a flowerbed carousel would also come into play..

The performance will take place for 90 seconds every 15 minutes.

“Gardening got us through the last year and a half,” he said.

“Antrim Castle Gardens is one of the most important gardens of its type in all of modern Europe, with its avenues, canals and trees, it brings me back to 17th Century France.

“I have been able to observe how people use the gardens and how they take back the ideas and recreate them in their own gardens.

“Gardening is a great healer and this project will leave something behind forever, truly unique.”

Mr Gavin said that he was proud to be bringing his creation ‘home’ to Ireland, and that the Antrim Castle Gardens setting was the ‘perfect’ location.

“It reminds me of Kilruddery gardens in Wicklow, and even of the video for Nothing Compares 2 U by Sinead O’Connor.

“With the canals, avenues and vistas, there is something of Versailles about it.”

Addressing the concerns over the ‘permanent’ nature of the show garden in an area which enjoys certain heritage protections, Mr Gavin told the Guardian: “The gardens here are incredibly precious and really important, the restoration is beautiful and we understand that the piece has to be appropriate and that the area needs to be preserved.

“I like things to be new, not recreations, but we have done something like this before, the previous garden in Dundrum was temporary, this will have some similar themes and will be going in a green area next to the existing car park.

“We really do hope it is in keeping with the heritage of the place.

“In Dublin, people kept coming back, wanting to see it, there were 16 year old lads with no interest in gardening waiting for the show.”

Mr Gavin said that the show garden would hark back to the glory days of the gardens when they were owned by the Massereene family.

“We do understand the concerns, but this will bring people together and help enjoy the gardens.

“In years gone by, gardens like these were only for the great and the good, they would only be open to the public at certain times.

“Houses and gardens like this were once hidden behind high walls and hedges, there would always have been big impressive spectacles, displays of wealth and status that the ordinary people would have had little chance of seeing.

“The gardens are now open for everyone to enjoy and this show garden will hopefully reflect that sense of community in a fun and playful way as well as being an echo of the glory days and past grandeur of the castle and the gardens.”