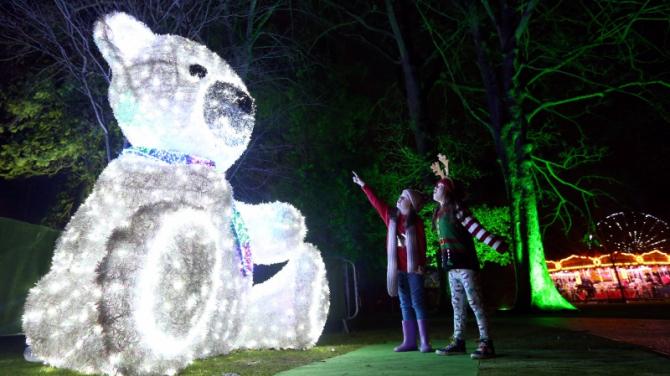 And yet another entry fee rise is on the cards, amid worries that storms could mean a loss of revenue in 2022 - although there could be a price freeze for residents.

New proposals also include widening the size and scope of the event this year.

There were also complaints that the latest event was ‘too crowded’, with too many queues.

After no event in 2020 because of the pandemic, Antrim and Newtownabbey Borough Council agreed a budget of £46,000 for the event and at the full council meeting in September 2021, it was agreed to apply admission fees of £6 per adult and £4 per child, with a family of four ticket £18 and ‘under 2s’ free.

The 2021 event was delivered over 18 nights spanning four weeks from late November to just before Christmas, with two inclusive event evenings.

A report due before the full council meeting this week said that the event opened on Saturday November 27 and finished on Tuesday December 21, operating from 4pm to 9.30pm on each scheduled date with a capacity of 7,500 visitors on each evening.

Marketing was said to have reached just over 1m people, with 100k social media engagements and a 3.5% average click rate

The report due before councillors said that, while the 2021 event achieved a surplus, the Enchanted Winter Garden financial model and delivery of the event within budget faces ‘a high risk from inclement weather’.

Officers said: “In 2021 two significant storms hit Northern Ireland during the event – Storm Arwen on Friday November 26 and Storm Barra on December 5 and 6 2021.

“Fortunately, the event was not scheduled to operate on these dates, however if the storms had hit when the event was scheduled to take place the ferocity of both storms would have required event cancellation and loss of approximately £50,000 in income on each occasion with limited corresponding cost saving.”

In planning this event, council officers said it is ‘essential that the financial model can withstand the inevitable impact of future inclement weather, which is extremely high at this time of the year and has been a factor in event delivery on an annual basis having led to previous event cancellations on a few occasions’.

The report continued: “Whilst feedback from the event was largely positive there was significant commentary in the post event survey and on social media about the event being too crowded and queue times too long.”

Officers have now presented a number of options for the 2022 event.

One is to reduce the overall capacity of the event on each evening and run for the same number of evenings – this will reduce the income generated by the event.

This would require an additional five evenings to be added to the initial 18 and officers say this would mitigate against some of the estimated income loss.

However the report said it would also create a corresponding increase in the running costs of the event which would be likely to cancel out the additional income.

The third option would be to expand the event area into the event field space and include ‘additional content in the form of lighting installations and attractions’.

This would mean that there is no need to reduce the capacity on each evening of the event from the current 7500 level.

However the report said that this will increase the costs of delivering the event bya whopping £100,000.

In order to generate the additional income required to cover the additional expenditure ‘whilst still having protection from the financial impact of weather related cancellation’ they propose to increase admissionto £7.50 for an adult, £5 for a child, £22.00 for a family of four and under twos free.

The report said: “If the overall numbers attending the event were the same as 2021 this can achieve an increase in ticketing income of £120,000 net.”

Officers acknowledged that councilllors had previously expressed concerns about the impact upon residents of a price increase.

The report said: “In order to protect residents from any increase officers are considering a number of ways to ensure residents can avail of a ticket price freeze and book at the 2021 rate such as provision of a resident only QR code in Borough Life, creation of an advance booking window exclusively for residents or a combination of both the above.”

Officers said that other methods utilising digital technology are still to be explored.

They said that with an anticipated 15% of visitors coming from the borough, this would reduce the additional income projected above to approximately £90,000 net.

The report also suggested a ‘soft opening’ of the event, ahead of the first official opening night, with selected residents invited and/or nominated to attend the event free of charge.

Officers added: “A process to make this opportunity available to those communities facing greatest challenge from current ongoing cost of living crisis could be delivered with the assistance of members and the Borough’s community and voluntary sector.”

It is also proposed that the Council’s Economic Development Section creates a ‘new animated route into the event via the town centre to ensure that local traders can benefit more from the additional visitors to Antrim during this period’.