Hunting the wolves of Antrim 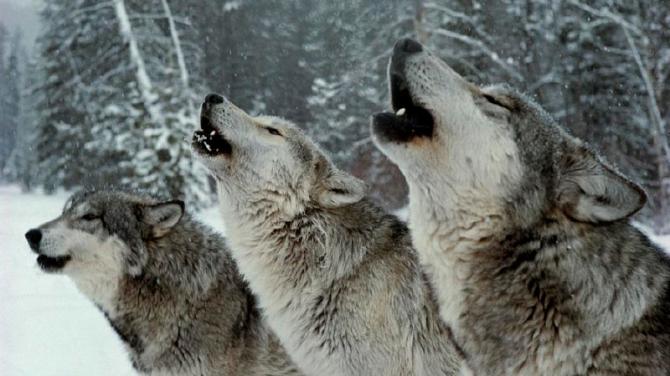 THE year was 1692 and the good people of Antrim were quaking in their beds, living in mortal terror of a marauding enemy unseen.

They were under siege from the ‘children of the night’, Ulster’s last pack of gray wolves.

The extraordinary episode was committed to paper that very year, and while some of the place names have changed somewhat in the translation from the original Gaelic, it paints a compelling picture of a community living on the edge.

Remember, those were turbulent times - the shockwaves of the 1690 still acutely felt.

‘There was the peace of desolation in the land - disturbed now and again by the wanton cruelties of the yeomanry, or the fitful risings-out in reprisal of the poor native population’, wrote our reporter on the scene.

‘Robberies for food and clothing were of nightly occurrence. Not the least offenders in this respect were the ‘carrowes’ and ‘reparies’ as they were called - James’s camp-followers.

‘They were the back-wash of Erin, courageless fellows who followed for adventure at the heels of the Royalist army, fought a stroke when forced to it, and ran like May-boys when the way was clear first in at a looting, and last to leave a mess.

‘All Ulster was swarming with them’.

They were for the most part Catholic and Gaelic speaking and many gathered together in clans, living in the open, harbouring by day in the mountains, sleeping at night up the trees.

Now and again they sallied forth, as their needs demanded it, seizing a sheep in the pastures, or raiding a house for meal.

Numbers of ‘honest regulars’ were among them too.

‘Brave fellows, they were, who had fallen doing their best, and got valour’s reward for it; a beggar’s bed by the wayside, and a nod to forage for themselves.

‘They had no more stake in the country than if they were tumbling-stones of the fields. They were poor, insignificant slaves, fit for nothing’.

And then it got a whole lot worse...

Ekey Whittle was bringing his master’s produce to market in Antrim - charmingly branded ‘the dullest, drowsiest mix-up of streets within the four seas of Erin’ - when he realised that he was not alone. He was being followed. Hunted.

Then he spotted his quarry. His eyes could scarcely believe it, but it was a hungry pack of wolves - and they were closing in fast.

‘He had been chased by them in the dark for miles along the Old Templepatrick Road, by the Rough Forth, and Carngreine, but they had scared off as they approached the town toll-bar, and had taken away by Mucamore and the Old Abbey Demesne next Killead on the Loch Shore’, said our narrator.

‘His own ashen-white face and the tempest of sweat rolling off his winded mare’s quarters spoke testimony enough to the truth of his story.

‘They were big gray lads, he said, old wolves, lank and hungersome, and had come apparently off Beann Madhigan, or some other of the Belfast mountains’.

It had been years since the fearsome beasts had been spotted, let alone so close to town.

‘Here now was a to-do. Wolves in County Antrim! Wolves, the very name of which had been forgotten in those parts for nigh on a hundred years back’.

But why had they suddenly decided to make their presence known, and in Antrim no less?

‘Some said they were a stray pack, separated in the recent troubles - by the noise of dragging baggage, forced marchings, and onset of battles - from their more fortunate fellows who preyed for weeks unmolested on the rotting carcases of the fallen Irishry after the disaster of the Boyne.

‘It is a matter of sober history that Meath was over-run - literally over-run - with wolves, hailing principally from Connaught, after the memorable battle fought on the river-banks between the forces of Dutch William and Craven James on the 1st day of July of the year 1690.

‘So precipitate was James’s retreat that hundreds of the bodies of his fallen levies remained unburied; and the sulphurous smoke of battle clearing showed wolves and vultures innumerable gorging themselves to surfeit on the bloody, heaped-up carcases of the dead.

‘Many pathetic stories are told of the faithfulness of wolf-hounds, the property of fallen Irish officers who watched day and night unceasingly over their poor masters’ bodies, daring the carrion crew to come near them; and desisted not from their sad task till they sank through hunger and weakness by the sun-bleached bones and flaunting ragged uniforms, with the fell shadows of the undaunted wolves and crows darkening over them’.

‘The farmers, come in since morning from the different outlying country districts, all left early in the forenoon, and sober for Antrim men with loose money in their pockets.

‘They rolled home in groups, with their good wives and buxom daughters hid among the rugs and the bundles behind them, their cart-axles giving tongue merrily in chorus, and all keeping a sharp fearful eye on the woods and waste places marching on the roads for any appearance of the dread marauders.

‘The Killead people took especial precautions; for according to the luckless servant man who had been hunted by the wolves; and had carried first tidings of their whereabouts to the town, they had taken off in the Killead direction, and were skulking somewhere along the south Loch Shore.

‘Fires were burnt all night by watchers about Antrim town itself. The toll-bar was barricaded, and every approach and entry made secure’.

But the pack did not put in an appearance that night. Instead they preyed on rich pickings miles away.

‘Morning dawned, and with it the intelligence that a sheep-fold in the townland of Glendarragh on the Crumlin River had been entered during the night, and twenty head of sheep murderously accounted for, besides the rest of the flock let loose in aimless terror over the countryside, bleating most mournfully.

‘The whole Loch Shore was now up. A meeting of the farmers was hurriedly summoned. Search-parties with loaded blunderbusses were organised, and dispatched in all directions - and still no word of their hiding-place’.

But they had not gone hungry, a lamb fold was entered and the inhabitants devoured.

‘For three nights the pack roamed at sweet liberty, the veritable terror of all’, noted the scribe.

‘The wolves were becoming so bold that they ventured close up to houses even in the broad light of day.

‘And persistent rumour ran that a child had been lifted bodily from the greens about Old Crumlin Scutch Mill, while playing there at leap-frog with its fellows’.

Something had to be done. It may have been Sunday, but a meeting was hastily convened at Auld Rabison’s barn out at Killead.

‘Twas the Sabbath, I’ve said, but to make up for any seeming desecration of the holy day by talking business every man of them, wore a face as long as a Fair ballad, or a Lurgan spade.

‘The deliberations were protracted - and fruitless. Plan after plan was proposed, only to be rejected.

Tamson galloped off in the direction of Templepatrick. His destination was Castle Upton and, hopefully, a meeting with the potential hero of the hour.

‘Upton was a true-blue covenanting Sabbath keeper. But he’d break more than the Sabbath, faith, if the notion of a hunt was in the air - and what a hunt!’

So who was Clotworthy Upton?

‘A dark, dour, puritanic man was Clotworthy, close on his purse-strings, stiff to a bargain’, said the man on the ground.

‘For all his hardness he had aquired the native love of sport; and where a cock-fight or a badger-bait was concerned he was, as they say, Hibernior Hibernicis ipsis’.

For those not in the know, that translates as ‘more Irish than the Irish themselves’.

Apparently his kennels and his cock-runs were the pride of the shire.

‘There was not a brock burrowing in Carnmoney, that his terriers would not draw, or hare harbouring by Molusk that his hounds would not kill.

‘And when it came to leading out a staff of cocks not even that crack of cockers, Randall MacDonnell, who backed his birds as the ‘gingerest blood that flew’ could hope to stand before him.

‘Many a bloody battle had they - Protestant Upton and the Gaelic gentleman from Randalstown’.

And it was Upton who usually prevailed.

‘It is not with my lord in his character of cocker or badger-baiter we are immediately concerned, but with my lord as wolf-hunter.

‘Upton as Upton was known to a parish, as badger-baiter to a county, as cock-fighter to a province, as wolf-hunter to a kingdom

Just the man, then, to track the last known wolves in Ulster.

But it was still with some trepidation that the young visitor faced the gruff older man.

“Ah, Tamson, it’s you then?” said the Squire in his usual blunt way. “You are late a-foot.”

Though initially sceptical, Upton finally agreed that there could only be one winner in the battle between man and beast.

“Ah, well,” said the Squire, rising briskly to his feet.

“There’s none but myself and the dogs for it, then.

“Well, mount saddle and peg home as fast as old ‘Lizzie Fairfoot’ will carry you. Off, Tamson! Warn the countryside.”

‘In a short time, however, he was a-horse, and pounding down the dark road towards Clover Hill, stopping at every wayside habitation to acquaint the folk of their coming deliverance’.

And Upton was good to his word.

While there’s surprisingly little in print about the last stand, the history books confirmed that he did prevail.

The last wolf seen in Ulster was indeed killed by Irish wolf hounds on the hill of Aughnabrack, by Clotworthy Upton of Castle Upton.

To this day Aughnabrack is commonly called Wolf Hill by the people of Belfast.