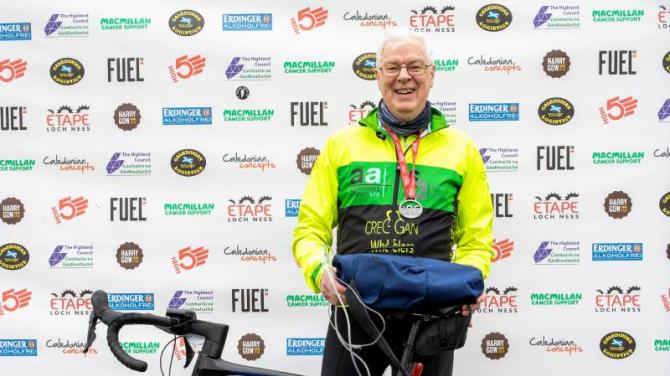 A RANDALSTOWN man who battled back from the brink after spending 70 days in hospital with Covid-19 has completed a 66-mile cycle around Loch Ness with oxygen cylinders on his back.

Gerard McLarnon (63) successfully completed the 2022 Etape Loch Ness sportive - after being hospitalised for 70 days, 57 of which in ICU and 40 days on a ventilator.

His ordeal left him having to learn how to walk, talk and swallow again.

Gerard was in hospital longer than most patients admitted with Covid in Northern Ireland during the pandemic.

He was treated to a guard of honour by applauding health care staff when he finally left the Intensive Care Unit.

Crowds of well-wishers also gathered at his home in Randalstown to welcome him back.

He was supported on his mammoth endeavour by Creggan Wheelers, the cycle club in Randalstown that has played such a big part in his recovery.

Gerard said at the weekend: “This is a really emotional day for me.

“I had planned to do the Etape Loch Ness along with my fellow riders in Creggan Wheelers back in 2020 and had been training for it.

“Then I was admitted to hospital on March 31st where I was to remain for 70 days.

“I firmly believe that training for the Etape in 2020 saved my life.

“Had I not had that level of fitness to fight Covid, it would have been a different story.”

Gerard’s younger brothers John and Dominic joined him for the Etape, part of the team of 14 from the Creggan Wheelers.

John explained: “There were many times when Gerard was in hospital that we were told he wasn’t going to make it, so to see him complete the Etape today is absolutely incredible.”

The cycle, which starts and finishes in Inverness and takes riders along the iconic Loch Ness.

The event organisers arranged for Gerard to have regular oxygen along the route which he carried on his back. “Although I am pretty much back to normal, I do still need oxygen for intense physical activity like cycling.” he said.

“I am grateful to the organisers for assisting me and I am indebted to and proud of my fellow Creggan Wheelers who stuck by me today, as they have over the last two years.

“We set out together and we finished together.

“It is this team spirit and a healthy dose of sheer bloody mindedness that has got me through!”

Gerard, a father of three and grandfather of four, has returned home to his beloved wife Kathleen.

When asked about his next challenge, he said: “This was the big one for me and it shows how far I have come.

“The final stage of recovery will be losing the oxygen supply - that is my next goal, but I know I have to be patient.”