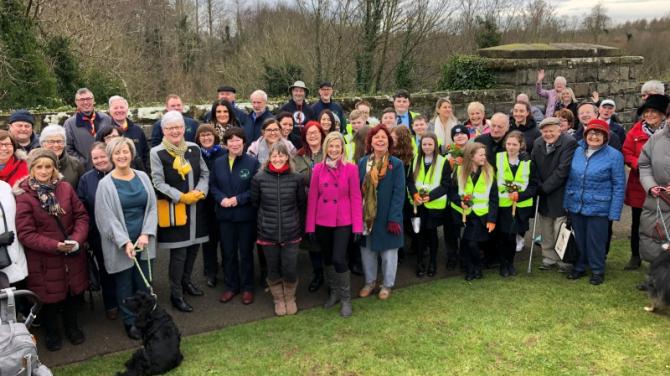 INCREDIBLY it was just a few weeks ago on March 15 that members of the Randalstown community gathered on their beloved Viaduct to hear a very special message.

In a video message, Gloria Hunniford revealed that the judges had ‘loved, loved, loved’ Tidy Randalstown’s application for a new community garden, gifted by the Royal Horticultural Society.

And Gloria confirmed that the town’s magnificent landmark was going to be the setting for a unique Northern Ireland garden, Randalstown’s answer to New York’s ‘High Line’.

Each of the UK home countries will receive one garden as part of the RHS’s Community Grant Scheme.

A film crew from BBC’s The One Show caught the excitement of the moment and a delighted Helen Boyd, Tidy Randalstown chairperson, commented on how the garden would ‘transform Randalstown’ providing an exciting and distinctive garden which will attract visitors and be an important restorative space for the people who live in the area.

Since then, the activity has been non-stop.

Antrim and Newtownabbey Borough Council carried out some initial preparation before Johnny Knox Garden Design, commissioned by the RHS to work with Tidy Randalstown and realise the vision of the garden, moved on site to do extensive hard landscaping in advance of ‘the big plant’.

The Tidy Randalstown volunteers, including some new recruits, joined the professional team this week to put the plants in place in readiness for #RHSGardenDay on Monday May 2, when the new garden will be open to the public for the first time, kick-starting National Gardening Week which runs until Sunday May 8.

In addition to the initial costs, the RHS will provide funding for upkeep of the garden for three years while Tidy Randalstown plans to recruit a new volunteer team to be ‘Keepers of the Viaduct’ under the mentorship of existing volunteers.

The garden, which will make subtle references to the Viaduct’s former purpose, will be a place to work, linger and to enjoy.

It will be the centrepiece of the necklace of community gardens that Tidy Randalstown has created over the past five years and will also provide an attractive open-air venue for civic events and celebrations.

“It is a joy and an honour for Tidy Randalstown to be working with the elite of the horticultural world in creating this unique garden on our Viaduct,” said Helen Boyd.

“I urge everyone to join us in celebrating it, cherishing it and nurturing it.”

Designer Johnny Knox said the project had been a fantastic experience.

“It’s not every day you get asked to design a garden for a spectacular Viaduct. It’s such a unique and dramatic setting but, more importantly, it’s an incredible privilege to work on such a cherished local landmark for the people of Randalstown.

“What’s most exciting is a vibrant garden in this setting has the potential to transcend and give back more to the community than what the viaduct could in its original form.”

All are welcome to the ‘big reveal’ on Monday, from 2pm to 5pm.

Entry is via the path from Station Road with the exit onto New Street. There will be an opportunity to meet the team, live demonstrations and refreshments.

Parking will be available in the town centre car parks or at St MacNissi’s Church on Station Road by kind permission.