Will teacher's 'cruel and cowardly' killers ever be brought to book? 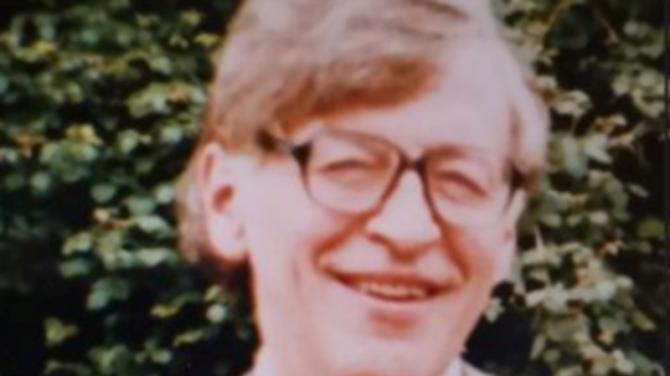 THE family of a retired teacher are facing yet another anniversary of his brutal murder - their pain compounded by the fact that his cold-hearted killers are still free to stalk the streets of Antrim.

Noel Martin was a shy man, blessed with old-fashioned manners.

And he was kind too. One evening when he saw a young man being turned away from a local disco because of his footwear, he took off his own shoes then and there so the reveller could enjoy his night.

That was just the type of man he was.

But there was a darker side too. In his later years, the 51-year-old’s life had been blighted by booze - and it was a deadly cocktail of drink and crushing loneliness that cost him his life in May 1999.

Mr Martin was born and raised in Antrim, but after completing his studies at Queen’s University he longed to travel.

He moved to London where he became a capable teacher, keeping an orderly class even as his own private life descended into chaos.

His drinking was spiralling out of control so, blaming the speed of life in the capital, he sought pastures new.

He moved to Barcelona but he was soon battling the bottle again - until, admitting defeat, he came home.

Homeless and unemployed, it seemed as if the former teacher had hit rock bottom.

But there was worse to come.

Noel was allocated a flat at Barra Street in Springfarm, and he was often seen smoking outside eager to shoot the breeze with anyone who could spare him the time.

Gentle and courteous, he was the ideal neighbour but for ruthless criminal elements that meant one thing - he was weak and ripe for the taking.

They would have their opportunity soon enough.

In early May 1999 Mr Martin had been away visiting family, but when he returned his Income Support had quietly accrued, and on May 24 he withdrew ‘a large sum’ from the Post Office in Antrim’s Castle Centre.

He then visited Madden’s Bar where he bumped into an old pal. During their brief chat he waved the wad of bank notes oblivious to who may have been watching from the shadows.

“I told him to put his money away, as he shouldn’t show it around like that,” the man later recalled.

“He then told me how he had been having trouble with youths in the area. I know that Springfarm is an area well known for this sort of behaviour, and Noel explained how youngsters had been smoking dope nearby and generally causing trouble.”

On reflection, and despite his windfall, he reckoned his friend seemed ‘a bit down’.

They chatted on for a while, but eventually he had to go and leave Mr Martin nursing a drink. He would never see him again.

Noel returned to his flat later that evening, with word of new found wealth not far behind him.

On May 26 he heard a sharp knock on his door.

It was late and he was not expecting guests but nevertheless he decided to see who it was. Any company was better than no company at all.

He was confronted by two men who claimed to be seeking nothing more that a place to sit while they waited for the arrival of a friend. Noel agreed, and his generosity even extended to providing drinks.

It soon became clear, however, that this was not a chance encounter. His new ‘friends’ were indeed waiting - not for an acquaintance, but for the chance to relieve their host of his cash.

A short time later they made their move.

They offered Mr Martin, who suffered from epilepsy, a tablet but when he refused to take it they ‘forced’ him to swallow it. It had a disorientating effect and he soon grew drowsy.

When his head cleared, his guests had gone. And his money had too.

“He didn’t go into much detail about who these men were, but he was anxious about it and also about the youths who appeared to be giving him trouble, ” his brother Sean later said.

The disturbing incident was reported to the police, but the investigating officer recalled that the former teacher appeared ‘intoxicated and confused’ throughout the interview.

He clearly remained deeply troubled by the incident.

The following evening, when a taxi driver delivered a bottle of wine to Barra Street at around 8.45pm, Noel told him of the visit by two ‘well dressed men’. He also spoke of the enforced drugging and of the theft.

“He was physically shaken and looked frightened as I spoke to him,” said the local cabbie.

“He also appeared to have drink taken. I told him not to open his door to people he didn’t know in future.”

It was timely advice, but it appears it went unheeded.

As the taxi trundled off into the thickening gloom, the driver had no way of guessing that he would be one of the last people to speak to Noel Martin. Apart from his killers, of course.

He was seen later that night, at around 10.30pm, pacing agitatedly outside his flat, puffing on a cigarette. And then he was gone.

The next morning a neighbour’s attention was drawn to the windows of his flat. The curtains had disappeared overnight and the glass appeared blackened and cracked.

She knew he had been ‘tormented’ by youths in the past, but feared that he may have fallen asleep with a cigarette in his hand so she called the police.

Constable Albert Johnson arrived on the scene shortly before midday and along with a colleague they approached the flat. A smashed window allowed them entry to the main building, but Mr Martin’s door was locked.

Constable Johnson peered through the letterbox and was hit by the pungent smell of burning. With no further ado, he kicked the door in.

Once inside he noticed that the telephone wire on the wall had been cut, dampening any realistic prospect that the blaze had started accidentally.

A tap was noisily gushing in an adjoining room.

In the bedroom the officers could make out the shape of a body on the floor.

An inferno had raged for a time, but since the door had been closed it eventually burnt itself out.

The fire and smoke had taken its toll, though.

The man’s body was blackened - but it soon became clear that he had not perished quietly in his sleep.

At the inquest into Mr Martin’s death in 2008, the then State Pathologist Jack Crane concluded that the cause of death was diffuse brain injury caused by repeated and ferocious strikes to the head.

The eye socket had also been fractured and there was extensive bruising to the deceased’s face and body.

Professor Crane believed that the victim had been gripped strongly around the neck, possibly in an attempt to squeeze the life from him.

Patterns of bruises to the ribs also suggested that he was kicked a number of times as he lay on the ground.

He was also able to identify the imprint of a shoe on the back of Mr Martin’s neck - an injury consistent with someone forcefully stamping on him as he lay dying.

To cover their tracks the ‘killer or killers’ then poured a quantity of flammable liquid over their defenceless victim and set him ablaze.

Noel Martin did not die immediately, however.

It is understood that he clung to life for several hours after the initial assault - but such was the scale of his injuries that it is unlikely that he regained consciousness.

It was one small mercy in a case where compassion was in depressingly short supply.

Soon police were swarming over the flat hunting for clues, and in the early days arrests seemed inevitable .

Murder squad detectives were confident that those responsible lived ‘nearby’, and called on the community to expose the killers in their midst.

Given the violent nature of this squalid crime, they also took the unusual step of appealing directly to the criminal fraternity.

This merciless slaying was so appalling, they said, that even hardened crooks would be sickened by it.

A £5,000 reward was offered too, but there were no takers. This was a community living on fear.

Within days Sinn Fein claimed that locals had seen individuals frantically burning their clothes in the early hours of May 28. None were prepared to come forward for fear of reprisals.

The killers may have been local, but the detectives’ phones were silent.

Undeterred, the PSNI passed the case onto the Retrospective Murder Review Unit for another volley of forensic tests.

That was in 2008 and there has been little evidence of a breakthrough in the intervening 14 years.

And that is deeply concerning.

Noel Martin was not a physically powerful man. It would not have taken much to subdue him.

But the people who visited him that night seemed intent on sending out a message to the community. This was overkill. This is what happens to people who speak to the police.

He was killed on a whim by people who believed they were above the law. They would not have to pay for the crime, because who would dare finger them?

That point also troubled Coroner Brian Sherrard. He was no stranger to presiding over grisly hearings, but the Martin case was particularly unpleasant.

“This was a cruel and cowardly killing of an innocent man,” he said.

“The people who carried out this vicious assault are still walking the streets, and I would call upon anyone with information to contact the police.”

“My brother was quite a frail man before he died, and this killing has highlighted the vulnerability of many people in our society,” he said.

Twenty three have now passed since his brother was stolen from him and justice seems as elusive as ever. His life sentence continues. It is often said that time heals all wounds but in truth the pain never really disappears - nor do the ugly scars.