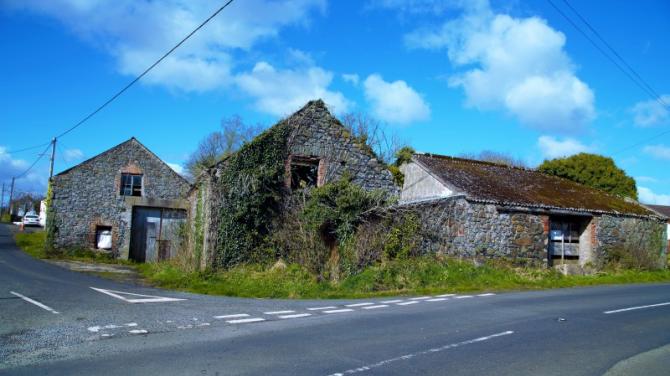 AS Antrim locked down in 2020, there was only one thing for Antrim man Brendan Smith to do - throw himself into another research project.

Now, two years later, Brendan has released his latest book, ‘The Mill on the Corner’ bearing the results of his meticulous work, with a foreword by the Antrim Guardian editor Jeremy Hopkin.

Sacristan at St. Comgall’s in Antrim, this is not Mr Smith’s first book.

He previously launched Silent Night, Holy Night: 200 Years Of A Catholic Church In Antrim in 2018 to commemorate its bicentenary.

Now he has produced ‘The Mill on the Corner’ about the Milltown area of Antrim - not only a history of the mill itself, but a social history of the community who lived alongside it.

There are fascinating photographs, newspaper clippings and interviews with people born and raised in the area.

While the mills which undertook such important work in times gone by are no more , Brendan brings them to life again and honours those who toiled within their now-crumbling walls.

In the preface, Brendan explains: “The Milltown on the Kilbegs Road has always held a special place in my heart.

“I remember as a young man walking from Antrim through Milltown to work at John Hurrell's Castlebawn farm and always yearning to live there.

“As time marched on the occasions to visit grew less and I moved away from Ireland for many years, returning in 1988.

“I started taking evening walks with my wife Pauline and sometimes it took us through the Milltown to Kilbegs and on to the Ballymena Line at what is now Carnbeg Development.

“The derelict old mill bid me welcome when I passed it by and somehow spoke to me to tell its story.

“Its life was of service to the people of the Milltown whose inhabitants have all gone and a new Milltown of beautiful dwellings have changed the appearance from a hard working poor community to a new secluded quiet road of houses.

“I now put pen and thoughts to paper and salute the occupants of Milltown and Kilbegs for their story.”

He added: “The streams and rivers of Ulster are lined with ruined mill buildings and with the remains of weirs, water courses, dams, and sluices.

“Here and there a water wheel is still working, more often buildings, if intact, have been stripped of machinery and converted to non-industrial use.

“In a country deficient of natural coal, water power must have obviously been important but what determined the districts in which mills were built?

“What processes were carried out in them? Whence came the entrepreneurs and capital to build them? When were these buildings in use and what conditions led to their rise and decline?

“Writers on Irish history have been so largely concerned with political matters that industrial development has received comparatively little attention.

“This is unfortunate because there are areas, particularly in Ulster, where small scale industry flourished.”

While many records pertaining to the people, places and activities of Milltown were burned in the fires of Shane’s Castle in 1816 and 1922, Brendan took a deep dive into Ordnance Survey maps, Taylor and Skinner’s road maps of Ireland, Tithe Applotment records, National Archives Census and Griffiths Valuation of Ireland 1862 to help bring the story to life.

There are large chapters dedicated to the O’Neill family and Shane’s Castle, and the school which served the children of estate employees and residents.

The hamlet of Milltown is situated in the townlands of Kilbegs and Shane’s Castle, two miles west of Antrim on the Randalstown Road.

The name ‘Milltown’ according to Joyce’s ‘Irish Names of Places 1875’ signifies ‘the town of the mill’.

From the same publication the townland of Kilbegs signifies ‘Small Church or Wood’.

This church was built by St. Sillan around 600AD.

The hamlet is so called because it derived its name from the corn mill in the centre of the hamlet at the junction of Milltown Road and the Junction Road.

The mill seems to date from 1738, as indicated by the inscription RFRB 1738 carved on an external stone about three metres from ground level in the East wall.

It is referred to as a corn and flax mill on some early maps.

The historical townland of EdenduffCarrick stands nearby.

In the early 16th century the present ruins of Shane’s Castle were built on top of the original castle called EdenduffCarrick.

EdenduffCarrick (also known as Monterevedy) is now obsolete as a townland name but part of it is preserved in the shortened form ‘Edenduff’ which is now applied to a row of houses in the neighbouring lowland of Shane’s Castle, just outside the demesne of Lord O’Neill, 200 yards West of Milltown on the Randalstown Road.

There was formerly a village named EdenDuffCarrick immediately adjoining the old Shane’s Castle but the houses were knocked down around 1815 and the houses on which its tood beside Lough Neagh were added to the demesne.

The present Edenduff was erected to house the workers from the Castle Estate around the early 1930s.

To prevent the further use of the old burial ground in Shane's Castle Estate, Viscount Raymond O’Neill enclosed a portion of ground a few hundred yards north of the mill to be used as a Graveyard, which was opened in Milltown on the Kilbegs Road about 1811.

The people of the neighbourhood seem to have been unwilling to avail of the new cemetery and so Lord O’Neill offered a grant to the family of the first person to be buried there.

The mill now stands silent and empty of its machinery, having been shut down in the 1950s.

It was powered by a single breast water wheel, 22 feet in diameter.

There to the water entering the pond on the north side of the mill where the under the Junction Road to re-join the burn.

The owner of the mill in 1866 was James Kerr and his workers were Daniel Caulfield, Samuel Redmond and William Gawley.

James Kerr passed ownership to his son Bernard, who passed it to Richard.

The property was sold in 1940 and the lease was owned by John Hurrell of Castle Bawn Farm, passed to his son William and then taken over by current owner, Lord O’Neill.

Mr Smith also tells how some of the machinery was removed by permission of Lord O’Neill and now can be seen on display next to the gates of Shane’s Castle in Randalstown, thanks to Randalstown Chamber of Trade and Tidy Randalstown.

The wheel was removed to Raceview Mill in Broughshane, where it has been restored and put on permanent display and the story of how the mammoth structures were removed and repaired can be read in the book.

Mr Smith takes a look at the various types of milling which took place in Ireland and even reveals how a millstone from Milltown has become part of a water feature in a local garden!

In terms of people, one of the Milltown's most famous sons was William Orr, who’s family lived in the area.

He was to become active in the Irish Volunteers and then joined the United Irishmen.

In 1796 he was living with his wife and family at Farranshane, a mile and a half from Antrim in the direction of Donegore.

He was executed in 1797 on the Gallow’s Green near Carrickfergus and is buried in Killead Graveyard.

Other famous families in the area include the Donnans of Dunsilly House, who bought a farm at Kilbegs on which they grew tobacco.

Among the local characters recalled in interviews with people from the area is Paddy Hughs of Hooks Lane, who was famous for chewing a nail and for playing draughts with competitors in England - by post!

In his acknowledgements, Mr Smith said: “I gratefully thank Harry Kerr, Elizabeth Burns, Ciara Mc Atamney, Robert Clyde, his sister Carol Neely, Maureen Hurrell, Martin Allen and Frances McGarry and most of all Michael McKay and Roy McKeown for their help with superb photographs of the removal of the Milltown Mill machinery.”