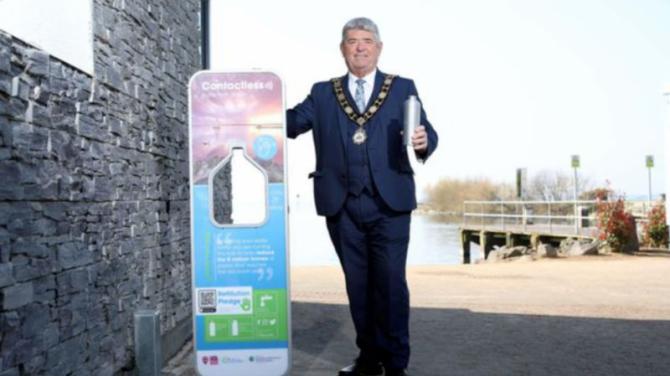 ANTRIM and Newtownabbey Borough Council is set to match-fund a £400,000 grant to fund more water fountains and solar bins.

A report due before the Operations Committee this week said that the water fountains and solar powered bins were installed in March 2022 but have both have ‘already had a positive impact in the parks’.

The water fountains have reportedly already saved the equivalent of 2,000 plastic bottles in the first four weeks of operation and the solar bins, due to their ‘closed apertures’, have ‘completely eradicated incidents of littering through birds removing waste from bins and scattering around the base of the bins’.

Officers said that the sensors in the bins have also been ‘very effective’ in saving time and resources as the bins are only emptied when they are approaching being full.

The report said: “For example, previously the bin at the entrance to Rea’s Wood in Antrim had to be checked every day on foot around 500 metres of path whereas the new bin sensor means that bin levels can be checked via an app and the bin is emptied only as and when required - usually every 2-3 days.”

The report said that Keep Northern Ireland Beautiful has announced a further release of funding through the Marine Litter Capital Grants Scheme up to a maximum of £40,000 of funding at 50% of project costs for 2022/2023.

In line with the Council’s Litter Action Plan and the successful installation of equipment, a further application for four water fountains and fourteen additional solar bins for other eligible ‘marine environments’ in the Borough is being submitted.

The terms and conditions of the funding programme remain the same with Council match funding to be provided from 2022/2023 Waste budgets.

It is proposed that the water fountain be located at the Newtownabbey Way and the River Maine in Randalstown, with two portable units for council-sponsored events at Garden Show Ireland and the Halloween Spooktactular event at V36, subject to a successful application.

The solar bins would be added to those already installed at the two Lough Shore Parks and Hazelbank to replace existing litter bins.

It was recommended that approval be given for match funding of £40,000 for an application to Live Here Love Here’s Marine Litter Capital Grant Scheme for water fountains and solar bins.