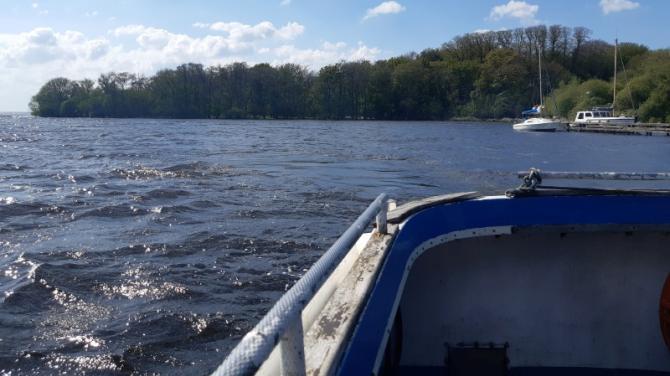 HAVING featured stories and tales about Ram’s Island for many years, the Antrim Guardian finally took the plunge recently and embarked on the ten minute journey across Lough Neagh from Sandy Bay.

The weather could not have been ordered any better - scorching sunshine and a slight breeze as we set off on the Island Warrior, just 14 weeks after the passing of Michael Savage, who dedicated his life to the upkeep of the lush green one mile spur of land.

Also on board were Michael’s daughter and son-and-law, who married on the island and are part of the plucky band of volunteers who are now helping to look after the historic beauty spot.

Having heard and read so much about this place, it was with a real sense of anticipation that we approached the heavily wooded landscape, contrasted against the deep blue water.

‘Idyllic’ is a word perhaps overused in the journalistic profession, but very few places can boast the calm quiet of Ram’s Island - it really is like another world.

You get a sense of what ancient Ireland would have looked like before modern man moved in - at some points, you feel like you are walking through a rainforest, under a canopy of ancient trees.

A well maintained path stretches from one end of the 40 acre plot to the other.

All you will hear is the sound of waves lapping the shore, constant birdsong and here and there, the crowing of a rooster.

Indeed, the friendly poultry flock resident on the island will run towards the jetty as you arrive, in hope of some tasty treats.

Just beyond the jetty is a well-maintained large green area with picnic benches, pergolas and a glamping pod.

At one end of the island is a small beach and on a day like last Saturday, you might as well be on the Med.

The water was crystal clear and there were expansive views over Antrim loughshore and even a stunning vista of the Mourne Mountains in the far distance.

From a bench, we observed swans, terns, cormorants and a heron pass by.

Passing by the ‘Wishing Stone’, we made our way back to the middle of the island where we came across the famous round tower and the ruins of the O’Neill’s summer residence.

It is on record that the ruins of a church were still visible near the round tower in the middle of the eighteenth century.

In the late eighteenth and early nineteenth centuries, human bones, including several complete skeletons and remains of coffins were occasionally dug up in the vicinity of the tower.

Brass fastening pins, probably for monks’ cloaks or shrouds, were found in conjunction with the burials, and amongst the coins discovered was one of Edward I.

The tower is constructed from fairly small rounded stones which may well have come from the island’s shores, and is forty three feet high, but was probably somewhat higher when it was originally built, similar to that of the ‘Steeple’ in Antrim town. Archaeologists have dated the Tower to the ninth or tenth century.

The threats from the Vikings have been suggested as one of the reasons for the building of round towers - but the Ram’s Island structure would have been a magnet to raiders, as at its original height of around seventy feet, it would have been visible from practically the whole Lough in good visibility.

But it was Glenavy man James Whittle, who got the island in exchange for a farm, who planted a profusion of shrubs and trees and laid out an orchard and a rose garden, attracting the attention of the O’Neills of Shane’s Castle.

He sold the island to the family in 1804. The good Lord added some modifications of his own too.

He built a luxurious 19th century lodge or ‘Cottage Orne’ in the shadow of the round tower and the parties held there were the stuff of legend.

The most well known and enduring residents of the island were the Cardwell family. The late Jim McGarry wrote extensively about their offshore life, tending the island for their landlords.

Robert Cardwell and his wife Jane lived and worked on Rams for 50 years, ‘housed in an ornate thatched cottage with wide overhanging eaves, nestling in thick woodland, mostly composed of stately trees’.

“The O’Neill residence, in the Cardwells’ day and right up until the beginning of the Second World War was a work of art, single storied, set on low sheltered ground close to the raised centre ridge of the island.” wrote Mr McGarry.

“This dwelling was also thatched (and was maintained by a Thatcher from Ballinderry called Albert Devlin) with a very wide overhang.

“The exterior walls were finished in coloured pebbles, with the O’Neill coat of arms set into the front wall, also in multi-coloured pebbles. Much care and artistry had gone into the internal plaster work and cornices.

“The maintenance and daily cleaning of the holiday home, with its sumptuous furnishings, pictures and paintings, murals, and four poster beds with canopies, was the responsibility of Robert and Jane Cardwell, and so they, and eventually their young family, were kept fully occupied between fishing and island maintenance.”

Jane also had a beautiful flower garden on the bank in front of their cottage. They kept a milk cow, milk goats, hens, geese, ducks, and gundogs. An occasional calf was reared, and this was brought to market using a special boat.

The Cardwells were practically self-sufficient on the island, living on fish, milk, butter, eggs, chicken, tame and wild duck, rabbit and the produce of their vegetable garden and making rugs from the skins of rabbits. Jane also claimed that she had some help with keeping things clean and tidy - swearing that she was assisted by two ‘wee folk’ who would doff their hats to her.

When the O’Neill family were due to visit the island on holiday, a telegram would arrive with the Cardwells, giving the day and time of arrival.

The boat was sent to shore to ferry the family over on the appointed day, and at the same time the O’Neill house flag would be hoisted up the flagpole on the island, to remain until the family holiday was over.

Since there was no radio or telephone communication in those days, a system of visual signalling was perfected over the years between the Cardwells on the island and those on shore, using various plaque shapes and colours erected on poles.

Robert passed away in 1929 when in his late 90s. Three years later, Jane also passed away at the amazing age of 102. Jane’s funeral was recorded widely by press articles. Eight Lough Neagh fishing boats formed the funeral cortege from the island, filled with family and neighbours; it was a fitting tribute to ‘The Queen of Rams Island’.

Robert and Jane’s family spent much time on the island. One daughter, (Mary Ann Lyttle), and her granddaughter Sadie, lived permanently in the cottage until 1937, the last full-time inhabitants.

We stopped at a memorial stone on the island, which remembers Sadie, who passed away in 2011.

During the Second World War,Sandy Bay and the island were used as base for the Allied flying boats. The location also made it a favourite for romantic trysts for soldiers camped at nearby Langford Lodge.

Indeed to this day trees still bear the names of couples who dropped by in the 1940s. One particular visit proved to be memorable for all the wrong reasons, when a group of American GIs’ drunk on Lord O’Neill’s fine vintage wines, sparked a fire which burned down the old summer house

The scorch-marks can still be seen, behind the heavy Heras fencing which stops sightseers endangering themselves by exploring the unstable ruins - very little trace of the grandeur of years gone by remains.

Looking out over the view the O’Neills would have enjoyed from their holiday cottage, once can see exactly why they cited it in this location.

While the tower and the house are in ruins, we heartily enjoyed our sandwiches on the picnic bench in their shadow.

With the house in ruins and the war over, the trips soon stopped and nature began to reclaim the island, with rats decimating the bird life.

In the late 1990s, a new name entered the fray. The River Bann and Lough Neagh Association leased the island from Lord O’Neill in 2005 for the princely sum of £1 per year. In time ‘The Island Warrior’ sailed into service, ferrying people from Sandy Bay.

Picnic areas were cleared, camp sites were created and Michael Savage stepped up, wielding his trusty billhook to take down the invasive species choking the undergrowth.

Daytrippers had frequently pulled up wild plants, such as snowdrops and azaleas, and sold them at Nutts Corner market.

Michael also brought in a ratcatcher to rid the place of vermin, which had feasted on the eggs laid by birds along the shore and foxes which had come over from the mainland on the ice when the lough froze over were also removed. Michael and a dedicated band of volunteers helped turn around the fortunes of the island.

On the other side of the island is a camping area, which appeared busy, and a stunning carpet of bluebells. Camping is by permission only, from Friday to Monday. Weekend-long excursions for local groups can also be arranged.

On our trip to the island, other boats moored up and watersports enthusiasts on SUP boards and in canoes also turned up to explore the environs.

One couple of canoe enthusiasts even hitched a lift back to Sandy Bay to avoid the wind which had blown up over the lough.

However this great day out will only be available if the public continues to support the Ram’s Island Heritage Project and The River Bann and Lough Neagh Association.

The group admits that Michael Savage kept a lot of his encyclopedic knowledge of the island and indeed, the Island Warrior itself, in his head.

Just days after our trip, it emerged that a litter pick on Ram’s Island had to be cancelled after the boat began to take on water.

“Thanks to the resourcefulness of one of the volunteers it was possible to get the boat safely back to Sandy Bay without any issues.” said a spokesperson.

“However, as a result the Warrior will be unavailable for the next two weeks due to emergency repairs being carried out.

“Thanks to the resourcefulness of one of the volunteers it was possible to get the boat safely back to Sandy Bay without any issues.”

The group has applied for funding for a new vessel and is on the lookout for more volunteers, determined to fulfill Michael’s vision.

The spokesperson said: “After the loss of our esteemed colleague Michael, we are urgently looking for people to join our island team.

“If you feel you could bring something to the team and help continue the work on Rams Island please get in touch and we will show you what the island and team have to offer.”