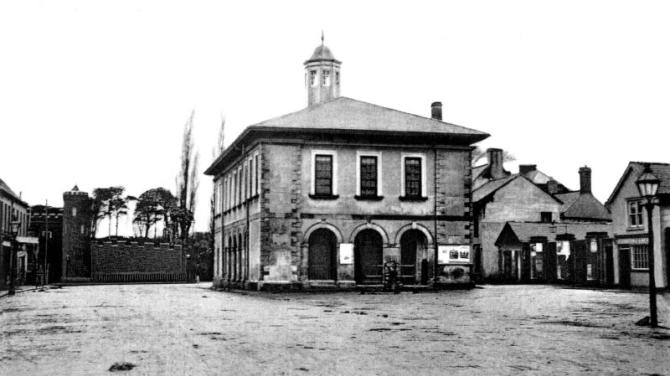 IT’S somehow comforting to think that sectarian strife is a relatively modern phenomenon - that the horrors of the Troubles were a violent aberration.

True, the grim social and political realities in the late 1960s created a perfect storm that allowed the paramilitaries to extend their toxic tentacles into communities on both sides of the ‘divide’.

But make no mistake - those bitter divisions are centuries old.

And even the relatively sleepy market town of Antrim was not immune to it.

This week the Guardian looks back at two events in the 19th century that underscore the fact that when it comes to religious intolerance, there is nothing new under the sun.

All were charged with the murder of Alexander Kernaghan Brownlees near Antrim on May 12.

Elizabeth Brownlees bade farewell to her husband that morning, as he headed into town to attend Antrim Fair. He never returned home.

She sat up into the night awaiting news and then, at around 4am the following morning, she heard a frantic knock at the door.

Alexander had been badly beaten and his life was hanging very much in the balance.

He lay at widow Forbes’ house and when Elizabeth arrived she realised that the outlook was grim. Her beloved husband was battered, bruised and ‘insensible’. By 1pm he was dead.

He was examined by Surgeon Latham who concluded that the cause of death was an extensive fracture of the skull which had caused ‘much compression of the brain’.

So what had happened?

A succession of witnesses took to the stand to piece together the events of that fateful day - and together they drew a disturbing picture of a man who innocently strayed into the path of others with murder in mind.

Robert Cooper and his father John knew the dead man well, and they had left the Fair with him at around 9pm.

They walked together on the road out towards Dunsilly and the craic was good - until they spotted a group of men loitering in the distance.

Nothing was said as they approached, but as soon as they passed stones and rocks rained down on them.

The three men ran with the mob in hot pursuit, more missiles whistling past them.

Robert and Alexander were soon taken down, both rendered unconscious.

When Robert regained his senses, the men were nowhere to be seen but his friend was lying a short distance away ‘lying on his mouth and nose on the ground’.

His father was standing dazed nearby, holding his side. It later emerged that he suffered three broken ribs.

Together they dragged Alexander off the road and attempted to rouse him, when the mob returned and began beating the men again.

They eventually dispersed when a man in a white coat and two women chanced upon the scene. The stricken man was carried to widow Forbes’ home and a doctor was called.

Asked if anything had been said or done to provoke the attack, Robert confirmed that there had been no provocation whatsoever. They had been set upon by a group looking for trouble.

This appeared to be corroborated by local man James McKeown, who was also on the road that night. He saw the unruly crowd in the area and he also recalled that men had been breaking stones in the area earlier that day. He also observed defendant James Moran.

Samuel Burke later told police that he had seen Robert McClean, adding that the accused appeared to have concealed the blade of a scythe under his coat.

A third witness, David Chism, was also on the journey home when the party were halted by a youngster who was ‘pretending to be drunk and wished to pick a quarrel with them’.

While they remonstrated with him a larger crowd hoved into view - and they were much more menacing.

The crowd, including prisoner Denis Cromie, picked up their pace and ran towards them - and they bolted to the Burke homestead nearby.

Moments later the mob were battering the door, baying for them to step outside. Wisely, they declined.

One was heard to say that they may have found safe sanctuary but warned that they ‘would get it before they went home’.

Another said ‘they would never get home’. A third added: “They should have brought a coffin and sheet with them.”

After they left, Mr Chism bravely ventured outside, cautiously retracing his steps towards Antrim warning travellers on the road to avoid the area or risk being ‘abused’.

But what was fuelling the violence? Witness Andrew Dodds provided a vital clue.

The Armagh man was travelling to Ballymena when he observed the group of men pursuing Alexander Brownlees. And he heard what was going on too.

“Hell to your soul. What will King William do for you now?” bellowed one of the mob.

“Murder, murder. Save my life,” responded their terrified quarry.

The possibility of a sectarian motive was given further credibility by Dunsilly woman Mary Duncan.

She heard the ‘sound of heavy blows’ near her home that evening and went outside to investigate and saw a group of men ‘beating some person’.

She heard one proclaim that ‘he had got enough’, though another disagreed, suggesting that they ‘give him more’.

Tellingly, another man called for ‘his King William to rise up and save him’.

Then Robert Campbell entered the fray. He claimed that he too was on the road to Dunsilly that night after leaving the Fair at 9.20pm. He told the court that he had observed the altercation - and he had spotted prisoners Cromie and Moran at the scene.

He also suggested that one of the group said ‘it was only that fellow Brown Wallace who led a band through Antrim, but he would never do it again’.

A damning piece of information, if true.

Under cross examination Campbell confirmed that he attended court from prison having been charged with theft on May 26. He had also been charged of stealing a pig at Antrim Fair on the day of the attack.

In prison he learned that there was a reward in the Brownlee case, though he denied that he had asked fellow prisoners to identify the murder accused so he ‘might inform’ on them.

Richard Darragh begged to differ. He had served time with Campbell and he confirmed that the witness had asked him personally to point out the men behind bars for ‘killing the man near Antrim’. He spoke about the reward too.

William McMurran cast further doubt on Campbell’s testimony. He had seen him at the Fair and he had asked to stay at his lodgings that night - but the witness ‘did not like that proposal’.

Instead, he went out to find Campbell a place to stay, and was with him from around 8pm until 11pm that night. When he awoke the next morning he was ‘astonished’ to find him in bed with himself and his wife. He hastily left a short time later, without a single mention of the Brownlee murder.

But even if the jury discarded Campbell, there were still multiple credible sightings of the accused in Dunsilly that night - but there was precious little proof of who struck the deadly blows.

After considering the facts, they decided to acquit. But the defendants were not out of the woods just yet, as Moran, McClean, Cromie and Morrow were instead charged with rioting on May 12.

A life had been lost, but four more had been spared.

Fast forward to September 1864 and an extraordinary meeting in Antrim Courthouse.

Locals were in uproar because of the sudden arrival of no fewer than 30 extra police officers in the town.

Well, it seems the main bone of contention was the fact that the officers had not been invited by the local magistrates - but by the Parish Priest of Antrim and Randalstown.

Father Henry O’Loughlin believed that Protestants were planning to burn an effigy of Dan O’Connell and he ‘dreaded a disturbance’ should that occur.

O’Connell, who had died in 1847, was an Irish nationalist leader. Known as The Liberator, he had helped Catholics win the right to stand as Members of Parliament.

Dr Taggart, a Town Commissioner, chaired the rowdy session. And from the outset he stressed that he was representing ‘the peaceable inhabitants of the town, who were indignant that a police force should have been sent amongst them to quell disturbances which had never yet occurred’.

He added that he felt compelled to publicly refute the ‘unfounded allegations’ that had prompted ‘the disgrace of the infliction of extra police’.

They then heard from the Parish Priest - and he was in a bullish mood. He revealed that he had applied for a Government Inquiry into recent ‘disgraceful events’ in Antrim.

“I also take the liberty of advising the Orange leaders who have taken a very active part in setting up this meeting that they would best consult for the credit of the town and for their own pockets by discountenancing for the future all such illegal processions as have so often and so lately threatened the peace of the town.

“I hope the meeting will not separate without passing a vote of thanks to me for the part I have taken in effectually preserving the peace of the community.”

To the surprise of no-one, that was not forthcoming!

Mr S Clugston said he was surprised by the developments as he felt ‘it had ever been the desire of Roman Catholic and Protestants to live together in peace’.

“If the people of the town of Antrim had any reason to suppose that the property or the person of the Roman Catholic Priest was in danger, the Protestants would be the first to defend him,” he said.

Rev Orr, who had lived in the area for 13 years, agreed that most were determined to ‘live and let live’ - but he accepted that there were tensions.

“Drumming and fifing often takes place, and the Roman Catholics always get the benefit of it. It is easier for the Protestants to refrain themselves from giving offence than for Roman Catholics to repress their indignation.”

He said he hoped the young Protestants would abstain from provocative parades.

“If this were done Ireland would prosper more in the future than she had done in the past,” he added prophetically.

WJ Gwynn concurred in ‘deploring those silly demonstrations which had been indulged in for years’.

He added that when rumours of an effigy burning began spreading like wildfire, locals were prepared to respond.

“The Orangemen of Antrim would be the first men to parade the town to guard against and prevent if possible anything of the sort taking place.”

Probably not what Father O’Loughlin had in mind...