Parents of conjoined twins thank local people for their support 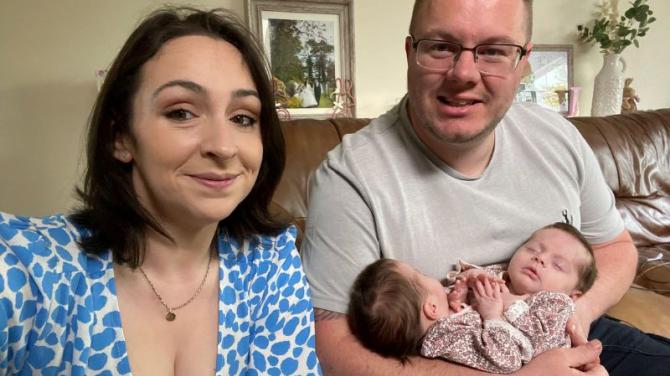 THE parents of the borough’s first ever set of conjoined twins have thanked the local community for their support.

Seven-week-old twins Annabelle and Isabelle Bateson were born joined from the chest to the pelvis at London’s University College Hospital.

They have separate hearts and share a liver, bladder and bowel, have one leg each and a shared fused leg.

Proud parents Hannah and Dan, who live outside Toome, are now preparing for separation surgery for their ‘miracle’ babies - who they say are ‘constantly hugging’.

Hannah is an NHS Senior Support Worker, while Dan is well known as the man behind Dan;s Spuds and Veg and the couple attend Journey Community Church in Antrim.

The Batesons have been together 14 years having met as teenagers from across the religious divide.

The couple, who married in 2016, sought fertility treatment more than four years ago but it was delayed due to Hannah having to lose weight and the pandemic.

Annabelle and Isabelle were conceived during the Batesons’ first cycle of fertility treatment - but the couple’s first scan revealed something was different about their pregnancy.

The couple were shocked to find out that they were expecting twins, but were advised that they should see a consultant immediately - as these much-longed for babies were to turn out to be one in 2.5 million.

On finding out they were expecting conjoined twins, they were referred to a specialist team in Belfast and then to London, where Hannah spent two months before giving birth for ante-natal sessions at University College Hospital.

She had to stay for a further four weeks after the birth before returning back to Northern Ireland.

The Batesons are now fundraising to help them cover the costs of constantly travelling back and forth between Northern Ireland and London, after a whirlwind series of media appearances, including a slot on This Morning speaking to Holly Willoughby and Philip Schofield.

Surgery had been scheduled for this month, but was delayed after the babies and Hannah caught Covid.

Hannah told the Antrim Guardian: “I’m usually a person who needs to know exactly when and where everything is happening, but this is different - there is no date hanging over us and I can just relax and enjoy being a Mummy for a while.

“The trick is to get them to sleep at the same time - when one is sleeping and the other is awake it can be a bit tricky!”

After the babies were born, they were immediately moved to Great Ormond Street Hospital – the leading specialist hospital in Europe for separating conjoined twins - where operations to separate them and future treatment will take place.

Hannah, who underwent a Caesarian section, was able to hold her daughters the day after they were born.

It was touch and go for a while, with medics not sure if the pair would even survive, expecting very sick babies - but that was not to be.

The Batesons have been told the full separation is likely to take place during one operation, details of which are still being worked out by the surgical team - and it will be a long process.

Follow-up operations may then be required ‘in the immediate days and weeks’ after the main one. They may require ongoing support into their teenage years and after surgery, the girls will have one leg each and a prosthetic leg each.

Their ongoing care means that Hannah has had to give up work.

But she said that the support from local people has been ‘overwhelming’.

“I’m a blow-in from the Dungannon area, but I have to say that people in the wider Antrim area are amazing, in terms of the support,” she said.

“The girls are like little celebrities, they have touched so many people’s hearts and it feels like there are so many people on this journey with us.

“Our church has been amazing and sent us care packages for when we were over in London.

“Everyone is reaching out to see what they can do for us and it has been a real help during what could have been a very difficult and lonely time for us as new parents facing the unknown.

“We feel so loved and supported too, we cannot believe the generosity that has been shown to us, whether that is donations, prayers, gifts or kind words, even a child’s drawing, it is all so very appreciated by us.”

Journey Church has helped the couple set up an online fundraising page, accessible via Facebook group Bateson Conjoined Twins, to help support the family. Almost £12,000 has been raised, with an initial £5,000 target.

“From the beginning these girls showed their determination, no one knew if they would survive the pregnancy or birth but the girls were born with lungs filled with air, screaming, showing everyone their strength and fight, we hope and pray that this determination continues to carry them through the challenges that they are going face throughout their lives.” they said.

“They have fought so hard to be here and we want to provide for them as much as we can.”

Hannah and Dan say that ‘every penny donated to the girls will make a difference’.

Bateson Conjoined Twins can be found on Facebook, while you can log on to the fundraiser at www.justgiving.com/crowdfunding/