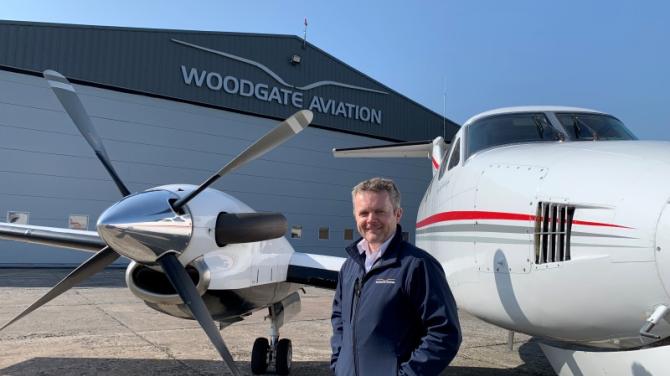 The aircraft charter and general aviation maintenance company, has its sights set on expanding its Approved Training Organisation (ATO) into the Republic of Ireland, EU countries and the UK.

The company, which has its main base at Belfast International Airport, secured coveted ATO status from the UK Civil Aviation Authority five years ago and has since added several highly prized approvals for a range of aircraft.

Approvals include rating on the King Air type and aircraft manufactured by British aviation company, Britten-Norman, which can often be seen flying over the borough..

The expanded, fully accredited ATO status opens the way for a significant boost in business in a highly specialised end of the aviation market.

Woodgate Aviation’s Head of Training, Captain Simon Atkins (40), said that from an initial desire to become self-sufficient in training its own pilots, the company is now going out to the aviation sector nationally and internationally with a simple message: ‘we’re here and you can use us.’

“ATO recognition expands the range of aviation services we can offer. We are able to meet a small but important niche in the industry where potentially there’s high demand.

“We saw that gap in the market and we’ve got the formal approvals to fully exploit it.

“As well as being a CAA Approved Training Organisation, we will also be able to provide EU Aviation Safety Agency (EASA) Examiner and Refresher training.

“Once word gets out there, and we begin to win business, it may form a major part of the income stream for Woodgate Aviation and the development of the company.

“Our fixed wing air ambulance, aircraft charter provision and general aviation maintenance services will continue to be the largest elements of the company, but approved training programmes offer great potential.

“The EU is not that far away. It’s only a few miles down the road in the Republic of Ireland and the company is hoping that with the EU EASA Approvals that we’re getting, we’ll be able to tap into that market.

“Ireland is the first priority within the EU.

“As soon as we’re able to provide the Seminar aspect of the training, we believe that a significant proportion of our ATO business will come from the island of Ireland in its entirety.”