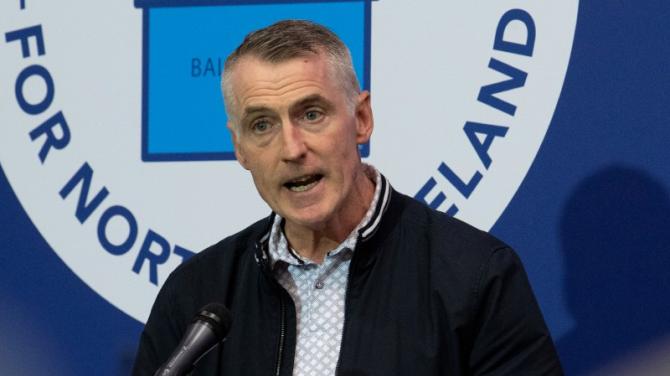 SINN Féin South Antrim MLA Declan Kearney has called for the immediate restoration of the political institutions following an historic election in which the electorate of South Antrim ‘endorsed the Party’s message of genuine power sharing, delivery and effecting real change’.

Mr Kearney topped the poll locally, and was elected in the first round of the epic count at Jordanstown last week.

“I want to thank the 9,185 people, representing over 20% of the votes cast in South Antrim, for entrusting me with the mandate I have received in this Assembly election,” said Mr Kearney.

“Sinn Féin described this election as the most important of a generation. We put before the electorate of the north a vision of change and genuine power sharing; the opportunity to re-imagine relationships in this society on the basis of fairness, equality and social justice.

“That message has been resoundingly endorsed, not just here in South Antrim but right across the north of Ireland.

“It is one of hope and optimism for the future where political leaders work together to make politics work. This is my commitment to the people of South Antrim.”

And he insisted that it was imperative that Stormont gets back to work.

“The challenges are clear; a cost of living crisis the like of which we have never seen before; an economic perfect storm engulfing our society, and public services that have been degraded, and are systemically damaged.

“All parties now need to get back to the business of government. We urgently need to form a new Executive in order to take the decisions required to invest an extra £1 billion in our health service, allocate over £330m to help ease the burden on households struggling with the cost of living crisis, and to agree a Programme for Government, and a three-year budget.

“All of this is within our gift. There can be no more delays; it is time for us as elected leaders to have the courage to step forward, with unity of purpose and determination to deliver a stable power-sharing coalition that works and delivers for all our people.

“Our collective responsibility is to meet their expectations by ensuring a positive, progressive and pluralist future for all.”