A community perspective - putting the Randalstown Viaduct back on track 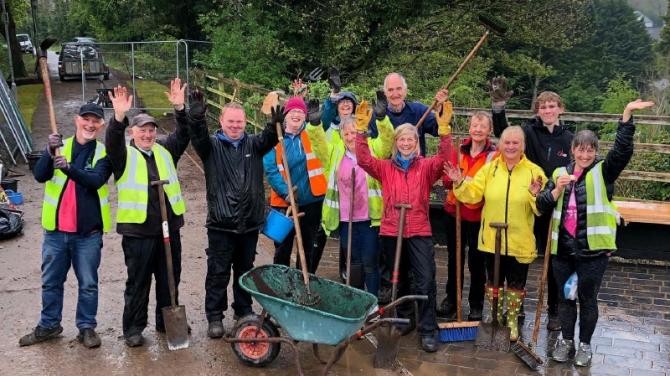 MAY Day 2022 witnessed a true landmark day for the Randalstown Viaduct.

The ‘big reveal’ of “Elevation” the new garden on the top of the Viaduct, funded by the Royal Horticultural Society’s Community Grants Scheme, and designed and created by Johnny Knox Garden Design with the help of the Tidy Randalstown Environmental Group, was a festive and joyous event attended by hundreds of people from near and far.

For Tidy Randalstown, the Elevation Garden is the crowning glory of its achievements of the past ten years.

From small beginnings the group has evolved into an environmental force to be reckoned with, enhancing the town centre with its planting schemes and creating gardens and landscaped areas for the community to enjoy, not to mention playing its part in protecting and promoting the town’s heritage.

On the way it has picked up a veritable treasure trove of environmental and civic awards, not least the Queen’s Award for Voluntary Service, the Best Kept Town in Ireland title, and two gold medals (so far!) in the RHS Britain in Bloom competitions.

The ambition for the new garden is that it will provide a new and much needed open-air gathering space for Randalstown, a beautiful place for a relaxing stroll and a sit-down, and a place to discover the enjoyment and restorative powers of gardening as a pastime as the ‘Keepers of the Viaduct’ the associate group of volunteers which Tidy Randalstown is setting up, tend and maintain the plants.

Wildlife will benefit too from the wide range of pollinator-friendly plants selected by Johnny Knox to provide year-round interest and sustenance.

A public garden in such a unique location will also be a huge addition to Randalstown’s menu of visitor attractions and the potential to boost the local economy is significant.

There are surely new opportunities for businesses to seize to improve the current rather modest hospitality offer!

As the town celebrates this new civic amenity it is a timely occasion to consider the history of the Viaduct and what is has meant for Randalstown through the years.

Completed in 1856 to carry the railway over the River Maine and on to Cookstown, the structure was designed by Charles Lanyon, best known as the architect of Queen’s University and the Harbour Commission Office in Belfast, and built by William Dargan, a prominent engineer of the Victorian era.

The presence of the railway ensured Randalstown’s connection to the wider world and would have been a factor in the growth of the town as a major linen producer with Charles James Webb first establishing a factory by the river in 1864 and registering the Old Bleach brand name in 1876.

The closure of the line to passengers in 1950 was surely a serious blow to the town.

Freight traffic continued, but with public funds turning towards the development of road transport the decline of the railways was inexorable and the last train, closing the line to Cookstown, left Randalstown on 31 October 1959. The railway lines and sleepers along the line were lifted and the telephone posts and wire were removed from the viaduct in 1961.

In 1962 the railway bridges over the main road and Station Road were removed. The viaduct structure lapsed into a period of dormancy that would last for 37 years and nature took over on the former railway lines. The mid 1990’s saw the establishment of the community development group Randalstown Arches and a renewed focus on regeneration for the town.

With the peace process underway and the prospect of significant funding, Arches developed a multi-stranded programme of proposed improvements under the umbrella title ‘Pathway to Peace’ and drew up bids to the EU Peace and Reconciliation Fund. Sixteen projects from around Northern Ireland were successful in the initial round of funding, including all four submitted by Randalstown Arches.

Among those projects was ‘Bridging the Divide’. Led on behalf of Arches by Sheldon Murray and the late Jim McNally, ‘Bridging the Divide’ aimed to reverse the growing perception that Randalstown had become divided along sectarian lines by the River Maine by reinstating a foot bridge over the main road and creating a footpath and cycle way along the Viaduct, linking the Station Road and New Street; a new crossing point that would strengthen the links across the town.

The project was completed and opened to the public at Hallowe’en in 1998. Lord O’Neill, who actually owned the Viaduct, gifted it to the community and the then Antrim Borough Council took on responsibility for its maintenance. Ever since it has been a popular short cut between New Street and the east side of the river and a regular route for walkers, with or without dogs.

Both Randalstown Arches and Tidy Randalstown have continued to take an interest in the maintenance of the Viaduct, working closely with council. Masonry work has been undertaken to repair and restore some of the pillars and the grass strip has been cut regularly by a volunteer on behalf of Tidy Randalstown. TR volunteers do regular litter picks and also gather on occasion to tackle ivy and weeds growing on accessible parts of the structure.

In 2020, the garden and shrubby area on the prominent railway embankment below the Station Road entrance to the Viaduct Path was completely restored by Tidy Randalstown with funding from the District Electoral Area and, renamed The Heritage Garden, is now a beautiful and much-loved landmark enhancing a key gateway to the town.

For Tidy Randalstown, however, the Viaduct itself, while well used and appreciated, still represented an element of unrealised potential but there appeared to be no easy answers to the problem of how to fund a project that would make a real difference. The prospect of a solution came with the announcement of the RHS Community Grants Scheme. In January 2022 the RHS invited bids from across the UK for funding to create four community gardens, one in each of the four home nations. With an initial budget of £50,000 at stake, plus funding for three years of ongoing maintenance, Tidy Randalstown set to work on its application for a garden on the Viaduct.

As well as the vision for the garden the bid also had to demonstrate the group’s strong links in the local community and support in depth for the project. Following submission, the judges from the RHS, including Johnny Knox, the designer who would build Northern

Ireland’s winning garden, visited Randalstown and met TR chairperson Helen Boyd and the small team who had compiled the bid. This was the first exciting indication that the bid had made the shortlist. The BBC’s One Show was playing a major role in publicising and promoting the RHS scheme.

They arrived with a film crew on 15 March and Tidy Randalstown, believing that they were still in competition with other bidders, assembled a range of representatives from the local community on the Viaduct.

When Gloria Hunniford announced via video that the Viaduct Garden was the Northern Ireland winner the cheer went up… and the work in earnest began!

The deadline for completion of the project was Garden Day, Monday 2 May, just over six weeks away. Luckily TR’s initial discussions with designer Johnny Knox showed that everyone was very much on the same page with their vision for the garden. The designs were agreed in record time and unveiled at another One Show recording session when Gloria herself came and saw the site and met the volunteers in person.

Antrim and Newtownabbey Borough Council brought great support to the project, including undertaking initial site preparation by removing the defunct lighting plinths along the Viaduct.

Johnny Knox and his team came on site in mid-April to start the hard landscaping and, once this work was well advanced, the volunteers from Tidy Randalstown joined them to help with planting the beds, painting the benches, and much else.

After weeks of dry weather, in pouring rain on Saturday 30 April the volunteers did the final planting and clean-up and the garden was ready.

Johnny’s comments on his Facebook post that day were just the first prompt for Tidy Randalstown to take pride in what had been accomplished:

“The great team at Tidy Randalstown working hard to the end to complete their RHS community garden project. At the start of the process they said “We won’t let you down” and my goodness they didn’t disappoint! Drenched today but still they delivered! Hats off!”

Johnny’s design incorporates graceful trees, perennial planting, grass areas and seating with new, gently-sloped pathways linking the lower and upper level paths along the Viaduct, a highly-accessible arrangement that makes a visually pleasing impact. Eight metal arches (dipped in brass) reflect the sunlight as well as the eight arches which support the Viaduct.

They are also are a scale match to the profile of a 1920s railway carriage; a further respectful nod to the former purpose of the structure.

On the day of the ‘reveal’ the public finally had their chance to view the garden and give their verdict.

Cutting the ribbon, Mayor of Antrim and Newtownabbey, Councillor Billy Webb commented: “We have all seen the important role that gardens and outdoor spaces have played over the past few years when it comes to our physical and mental well-being. With its beautiful walking routes, projects such as this will enhance the town even further and allow us to create a more vibrant future for all.”

Tidy Randalstown chairperson Helen Boyd described the garden as “a much-needed place for the people of Randalstown whose well-being will benefit from the sights, scents and sounds which greet them in this community garden.”

“Elevation” complements the wilder, tree-lined sections at either end of the Viaduct path and completes the ‘necklace’ of community gardens and landscaped spaces that Tidy Randalstown has developed around the town since 2017. The Viaduct’s place in the hearts of the people of Randalstown is assured as it looks forward to a new and exciting future.

And what next for Tidy Randalstown? Watch this space!

Linda Houston is a committee member of Tidy Randalstown and secretary of Randalstown Historical Society. She previously served on the board of Randalstown Arches for some ten years. Any opinions expressed in this article are her own.