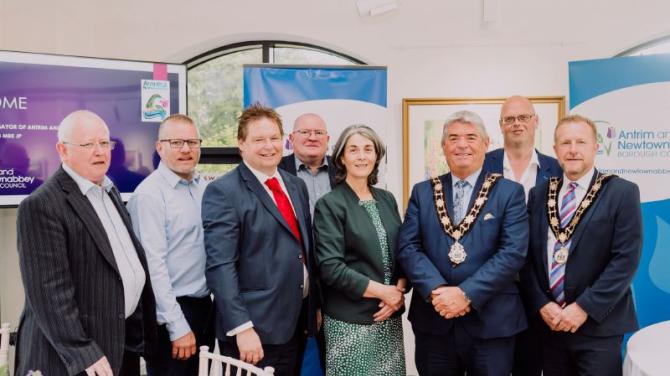 ANTRIM and Newtownabbey Borough Council invited a delegation of business people, investors, retailers, accommodation providers and other stakeholders to the Oriel Gallery at Clotworthy House in the Castle Gardens last week to unveil a series of ambitious development proposals in the borough.

As staff basked in the glow of the success of Garden Show Ireland the previous weekend, Ursula Fay, head of Arts and Culture and Majella McAlister, Director of Economic Development and Planning took to the lectern to guide participants through past, current and future projects which they hope will transform the fortunes of the borough. Mayor Billy Webb welcomed participants and opened the floor, following a complementary breakfast.

Ms McAlister acknowledged that the coronavirus pandemic and the popularity of online shopping had presented challenges and would mean that Antrim would have to present a unique offering to residents and visitors alike if it was to thrive.

She said that the borough had attracted a raft of life science companies now setting up or expanding their businesses, including Randox, Fortress and Biotech.

Business and job expansion, she said, would mean more people living in the area and therefore more ratepayers. Ms McAlister outlined that there would be almost 90 new houses being built at the former Antrim Tech site in the town, 123 at the old Enkalon site, 90 close to The Junction, 23 on Belfast Road and plans for a whopping 525 at Niblock Road.

She outlined recent work in Antrim town including public realm works, shop front improvements, the refurbishment of Antrim Castle Gardens and the Gateway Centre as well as the upgrading of local car parks - which she added was integral to being able to host large events.

The new £7.1m, 111,000 square foot Dobbies garden centre investment at The Junction also got a mention, as did the planned redevelopment of Castle Mall shopping centre.

As a visitor could be forgiven for thinking that there is no historic town centre as they pass by the unappealing view along the Dublin Road, Ms McAlister revealed some interesting changes.

As well as the work which is soon to be undertaken to improve the front facade of the building and the addition of residential apartments, there will also be a new mini ‘urban park’ element, which will see an urban park take up part of the car park. She said this scheme will help ‘bring Antrim Castle Gardens into the town’.

“This is not just a place to park and visit the gardens, we want to make this space part of the overall experience,” she said, adding that there would be a ‘wrap around’ public realm scheme.

Next on the agenda were the plans for Ulster Bar Corner, as already outlined in the Antrim Guardian.

The Council is entering into an agreement with the Department for Communities for two years to operate the site. There will be new event and recreation space, with planting and lighting and business ‘pods’ to be installed.

This, she said, will create a focal point in the town centre which will now be linked to the Gardens and other attractions.

The Steeple Park regeneration also got a nod. In the audience were Seamus Reid of Reid Black Solicitors and Garrett Duffy from Apricot Health Care, who are behind the plans for a new ‘health campus’ to the rear of the current Civic Centre.

The old council HQ and outbuildings will also be redeveloped into ‘flexible exhibition space’, while the historic parkland will get a formal, dedicated path network and signage to attract new visitors and enable local children to walk to Antrim Grammar and Parkhall College.

As a beneficiary of the Government’s multi-million pound Levelling Up fund, the old Wellworths building will receive a massive makeover to suit the needs of those requiring modern, flexible workspace. It is hoped that the 18,000 square foot of new offices will drive footfall back into the town.

The High Street building will also be opened up onto the Six Mile Water river boardwalk, which is being improved and extended, providing yet another route for visitors and residents alike from the town centre to improve connectivity between the town, Gardens and beyond.

With a masterplan containing 30 projects each for the five towns in the borough currently out for consultation, Ms McAlister welcomed feedback on the proposals.

Ursula Fay took over proceedings and said that the council and stakeholders are aiming many of their propositions at the ‘short break’ market, encouraging tourists to spend more time - and money - in the area.

She added that the Castle Gardens and the Gateway Centre were central to tourism development.

“We’re not the Causeway Coast and Glens, we’re not the lakes, so we have to maximise these assets.”

She confirmed that the Protector of the Lough statue was now in place and that the Joyce torpedo retrieval boat, which worked on Lough Neagh during the war, will soon be arriving to be moored at the Gateway as part of the attraction. Ms Fay said that the vessel will be in situ in ‘a couple of months’.

She also hailed the Clockwork Garden, designed and brought to the borough by celebrity gardener Diarmuid Gavin, which she called ‘really special’

She said the ‘permanent’ installation, which plays music and ‘comes to life’ every 15 minutes, was part of both the Garden Show Ireland event and a legacy project for the Queen’s Platinum Jubilee. She said she hoped it would be seen as ‘the future history of this wonderful site’.

Ms Fay repeated that the Round Tower at Steeple Park will be better promoted to visitors and revealed that Pogue’s Entry - the home of celebrated writer Alexander Irvine - and the Battle of Antrim will be the new focus for tourism development.

Irvine wrote the feted ‘My Lady of the Chimney Corner’, a love letter to Antrim and a tale of his impoverished upbringing in the alleyway off Church Street. The book has traditionally been a huge hit with the Irish-American community, but the cottage complex itself if not manned full time and visitors have to make an appointment to visit, relying on an available member of council staff, or wait for an event or open day.

Ms Fay revealed that the Friends of Antrim Castle Gardens and Ulster Plant Society would soon be based at the site, opening it up and enabling access on a wider scale.

Next, she said that with the Battle of Antrim’s 225th anniversary coming up next year, there were plans to properly tell the story of the 1798 rebellion where it actually took place. There are plans, she said, to particularly appeal to the American and Great Britain markets.

In terms of ‘flagship events’, Garden Show Ireland and the Enchanted Winter Gardens, both held in the Castle Grounds, were next on the agenda.

The Garden Show Ireland event first came to Antrim in 2014, and as it grew, the owner of the event sold it to council in 2018, but remains as an advisor.

Ms Fay revealed that Mr Gavin - who stayed in the Dunadry Inn during his stay in the borough - has already committed to the 2023 event, after being impressed by the gardens.

Ms Fay outlined how the festive celebration began as a small, free, event in the Parterre Gardens in 2014, before expanding into the Pleasure Gardens and growing year on year.

She said that Antrim was now becoming known as the ‘Christmas capital’ of Northern Ireland and it was recently revealed that the 2021 event had increased numbers to 120,000, despite ‘challenges’ presented by the introduction of the vaccine passport scheme.

The event was cancelled in 2020 due to the pandemic, and there are plans to further expand the event in 2022.

It was noted that only around 15% of visitors were resident in the borough.

Before the pandemic, Ms Fay said that Garden Show Ireland attracted many visitors from the Republic, while the Enchanted Winter Gardens, which she described as her ‘career highlight’, had enticed visitors from Europe and that the international market would be targeted going forward.

Ms Fay said that both events had the potential to appeal to tourists who wished to visit an outdoor space, go shopping, enjoy a meal and stay overnight and was keen to work with local hoteliers, restaurateurs and businesses to facilitate packages.

She said that other external events included the May Day Steam Rally and the Game Fair, both at Shane’s Castle, golf tournaments and a food festival.

At the Castle Gardens, there will also be the Women’s soccer Euros, during which Northern Ireland’s matches will be screened, a Pipe Band Championship and the Platinum Jubilee weekend as well as other seasonal offers and independent events.

Taking questions from the floor, Ms Fay told DUP Councillor Paul Dunlop that the Ulster Bar Corner scheme will be on site by late Autumn.

Mr Reid told the floor that while communication and working with local government had been very easy, he was finding more difficulty and less flexibility while dealing with central government.

Mayor Billy Webb paid tribute to the businesses who have invested in the local economy in recent years, driving economic growth in tourism, manufacturing, construction, housing, retail and health to name but a few.

“This is a very exciting time for Antrim, indeed I would go as far as to say it may be the ‘best’ time the town has enjoyed in recent memory.” he said.

“A combination of high levels of investment, a wonderful built heritage and plenty to offer the increasing number of people that are choosing to establish their homes here is creating a real momentum for change in the town.

“The council wants to work with partners in all sectors to build upon the success that has already been achieved and by working together to create more jobs and opportunities for our people and a wonderful destination for visitors.”