As cost of living crisis continues to bite, demand at Antrim Foodbank has doubled 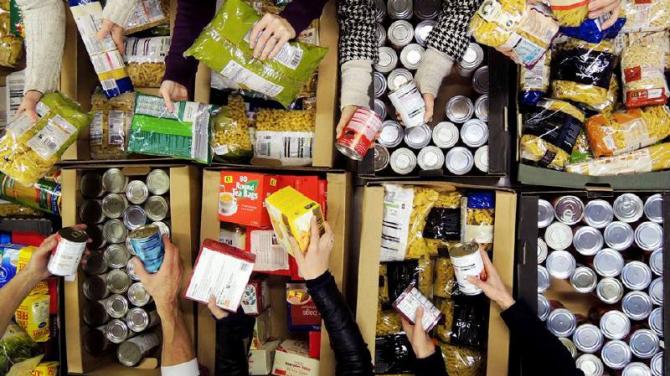 SHOCKING new figures released by Antrim Foodbank have revealed that 1,439 emergency food parcels were provided to local people who couldn’t afford the essentials between April 2021 and March 2022 - and 629 of these went to children.

This number of parcels represents a staggering 102% increase over 2019-20.

And with the cost of living crisis continuing to bite, they have warned that things will get a whole lot worse before they get better.

The Foodbank believes the increase in people needing support is due to the continuing squeeze on local people’s finances.

This has prompted the trial of an additional food bank centre, hosted by the Family Caring Centre on Monday evenings, to accommodate the working patterns of those in need.

Antrim Foodbank is a project of Oasis Antrim Community Support Hub and part of the Trussell Trust network, which has experienced its busiest winter outside of the height of the pandemic in 2020.

Food banks in The Trussell Trust network provided more than 2.1 million parcels to people on the lowest incomes across the UK from 1 April 2021 to 31 March 2022.

This is a 14% increase on pre-pandemic figures in 2019-20 as more and more people across the country are unable to afford the essentials - to eat, stay warm, dry and clean.

The need for food banks in the Trussell Trust network has accelerated throughout the past six months.

Food bank managers are warning of a growing crisis following the cut to Universal Credit in October 2021, as the cost of living continues to soar.

And the figures are certainly stark.

Sadly, the situation has deteriorated considerably since then.

January and February this year saw a 22% increase in comparison to the same period just 12 months before.

Antrim Foodbank has stressed that its team will always do all they can to help people in the community – but added that they should not be needing to distribute emergency food parcels on this scale.

Fionnuala O’Donnell, Antrim Foodbank project manager, has thanked the local people who have helped them provide a safety net for others in difficult times.

“There’ll always be a role for strong community groups looking out for their neighbours, and we’re so grateful for the generous support of our volunteers and to local people who have donated to the food bank,” she said.

“Together, you’ve made sure that local people who can’t afford the essentials don’t face hunger.

“The support we see across the community for people on the lowest incomes is incredible.

“But it shouldn’t be needed. We should all be free from hunger.

“No one should be pushed deeper into poverty without enough money for the things we all need.

“It’s not right that anyone in Antrim needs our food bank in the first place - everyone should be able to afford the essentials.

“At the moment the situation is only set to get worse, as this is just the start of the cost-of-living crisis.

“But we know what’s pushing people to need food banks like ours, so we know what needs to be done.

“People cannot afford to wait any longer for support – national, regional and local government at all levels must use their powers and take urgent action now to strengthen our social security system so it keeps up with the true cost of living.”

Antrim Foodbank has been providing three days emergency food and support to local people since 2016.

It is clear that they are needed more now than ever before.