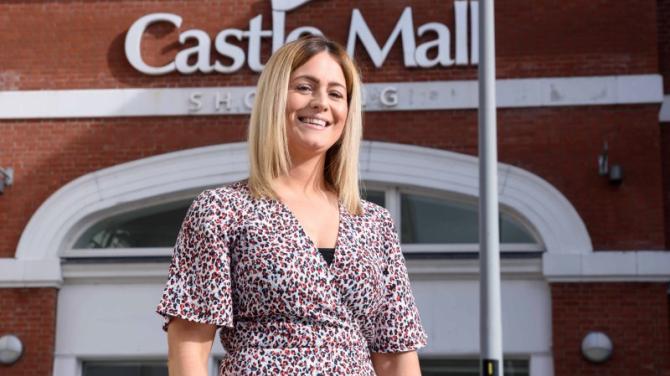 THE new anchor tenant for Castle Mall, which is undergoing refurbishment, has been confirmed as Lynas Food Outlet.

Work to restructure the mall to accommodate the 8,500 square foot premises is ongoing.

Stores like Hurrell’s, Card Factory and Holland and Barrett have already relocated to make room for the new addition.

A new Vietnamese restaurant opened last year and a pet shop is due to open soon in the old Classique cafe premises.

The Lynas family, who own Lynas Foodservice, have said they have ambitious expansion plans to reach 18 stores by 2024.

“Antrim is going through a huge regeneration and, with more investment in the town centre and additional family homes under construction, we see the potential in this catchment area and are delighted to not only bring our product range to the town, but also create additional jobs throughout the construction and retail operations.”

Pamela Minford, centre manager at Castle Mall, said she was pleased to see another retailer investing in the scheme.

“2022 has been a positive year for shaping retail and we have been on a growth trajectory since the transfer to the new owners in 2021.

“Lynas Food will reshape Castle Mall completely by opening it up onto Central Car Park and inviting customers to continue their shopping experience right through the centre.

“We have a strong local community in Antrim who want to see Castle Mall succeed and this is just the beginning of our regeneration strategy, with further exciting development plans to come soon.”

Billy Webb, the Mayor of Antrim and Newtownabbey, said: “As a well-known brand in Northern Ireland, Lynas will undoubtedly be a big attraction for shoppers and will be key to the further development of this part of Antrim.

“The council working with the private sector has developed really ambitious plans for Antrim and looks forward to implementing these over the coming years.”

Castle Mall was bought over by UK property company Edinburgh House in 2010.

Among other improvements in the area, a section of the car park will be turned into an ‘urban garden’, bringing the Castle grounds into town.

A drive through restaurant/cafe at the site of the disused toilet block has also been given planning approval in recent weeks.

The long awaited-transformation of the Castle Mall shopping centre was given the green light last year, with planners branding the current structure as ‘bland, unattractive and nondescript.

With many units lying empty and critics long pointing out that the dated edifice hides the historic centre from the view of passing traffic, an upgrade has been long overdue.

It is also understood that some of the shopping complex will be done away with and apartment accommodation will be constructed.

As part of a raft of regeneration schemes aimed at revitalising Antrim town centre, Edinburgh House Estates applied to merge a number of existing retail units within shopping centre to create a larger space, demolish 56m of the north-eastern facade facing the council-owned car park and replace it with a new facade and associated hard landscaping work.

A report by planning officer said said: “From the exterior, the northern elevation which faces onto the carpark is described as ‘fairly nondescript, devoid of architectural detailing and generally turns its back to the public road, carpark and is highly visible from Castle Way.”