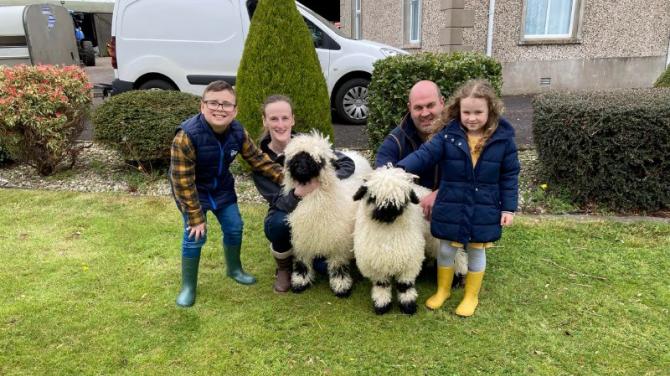 FOR MUCKAMORE farmer Irene Gray, it all started when her father bought her one of ‘the world’s cutest sheep’ to keep her spirits up following a diagnosis of a rare blood cancer.

She had first spotted the Valais Blacknose, a sweet Swiss breed with stunnung ringlets, while visiting Balmoral Show in 2017 - but husband Geoffrey wasn’t convinced!

But in July 2019 Glitzzy arrived home from Beattie’s Valais Blacknose sale on a summer night - and just three years later, Irene not only managed to secure classes for the breed, but won the supreme champion title.

The sheep are gentle natured, wonderful to work with and have great maternal traits, according to fans.

In July 2021 one of the very first clubs in the UK was formed under the leadership and expertise of Diane Lowry and Emma Conway, local Northern Ireland breeders.

Husband Geoffrey said that the sheep have brought much happiness into their lives after a very tough time.

The couple also raised money for Blood Cancer UK and donated a ram lamb for auction at the club demo day last year in October.

As a youngster on her family farm, always in and out of the sheep sheds, she had always hoped to win the big prize of best in breed at Northern Ireland’s top agricultural show, so she was over the moon when judge Brian Matthews of Quarrymount Pedigrees picked out her ewe - who is also known as Irene!

The human Irene and Geoffey are hosting the first Valais Blacknose NI Club workshop and lunch on Sunday June 5.

The event will cover all areas of interest to breeders and enthusiasts including a look at sheep health across the year, lambing preparation, the breed characteristics, washing and preparing for shows and sales and what to look for in the show ring.

The day includes a lunch, an opportunity to get know breeders and a raffle of lots of farming goodies

It is open to all NI club members and those wishing to become members and purchase tickets can go online at www.nivalaisblacknoseclub.

The club also looks forward to holding the first club sale in Northern Ireland on July 9.