The fearless vampire hunter who went digging for Dracula! 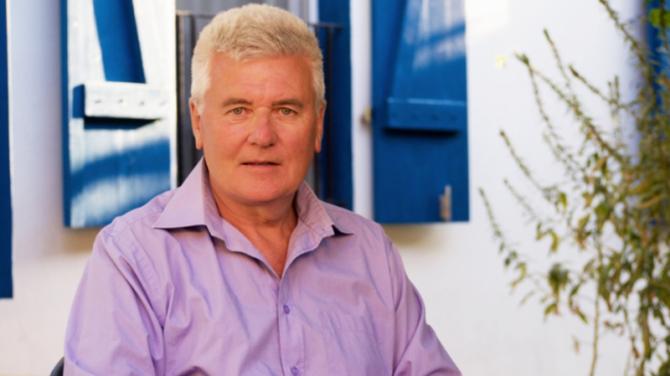 GROWING up was always going to be a pain in the neck if your dad happened to be a dead-ringer for Count Dracula!

Or more particularly horror star Sir Christopher Lee, who donned the cape and fangs no fewer than nine times during a career that spanned seven decades.

Last Friday marked the centenary of the actor’s birth, spawning a slew of programmes about this tall, dark and gruesome institution.

And you can bet that John Sean Hillen watched the lot.

Thanks to his dad Jack, the undead Count was in the family’s blood for as far back as he can remember.

They had moved to Antrim from Belfast, and soon they made their mark on their new terraced home.

But it was his sister Phyllis who first fell under Dracula’s spell.

“Aside from her husband, my elder sister Phyllis worships two other men,” said Sean.

“But there was little familial jealousy. Both are dead, or so it commonly thought.

“One is a man who wore take-a-breath, sapphire studded trousers, loved the limelight and is believed to be the all-time King of Rock n’ Roll.

“The other is a man who wore a flowing black cape, loathed any kind of light and is believed to be the all-time Prince of Darkness.

“Both Elvis and Dracula had pride of place in my sister’s bedroom in Antrim. She caringly erected small altars in homage to her heroes.”

Perhaps surprisingly his mum, a life-long horror fan, could not bear to watch Lee in action as Dracula - regularly retreating from the living room, explaining that he sent ‘chills own my spine’. One wonders what her hubby thought of that!

As for John, he enjoyed the vampire romps but was not spell-bound by them. Initially at least.

Instead he pursued the written word, working for various local and national Irish newspapers as the BBC and Time magazine, before emigrating to the United States where he worked at the United Nations Media Center in New York and in the American print and broadcast media in the Midwest.

He left the Midwest for post-Communist Eastern Europe after the fall of the Berlin Wall in 1990 to establish the first journalism schools in Romania as a volunteer with the Human Rights League.

He remained there for almost 20 years, becoming foreign correspondent for The Times, London, and The Daily Telegraph. He also worked with international development agencies such as the United Nations Development Fund and the United States Agency for International Development on various media projects, with newspapers and magazines as well as non-profit groups.

While there, John also became board member and chairperson of the US Fulbright Commission. The local man then established an independent national media and events company in Romania, including an overnight news service and a weekly business newspaper, and received national awards directly from His Excellency, Traian Basescu, President of Romania, for tackling corruption through investigative articles and for launching the nation’s first-ever Corporate Citizen Awards.

Quite a CV, by any standard!

So how, then, did this serious journalist decide to put this important work on hold to go ‘Digging for Dracula’?

Well, it seems that his interest was rekindled by a chance phonecall...

“My passing interest became an intense one when, as foreign correspondent for The Times in Romania, I was assigned to write an article on the first-ever World Congress of Dracula,” he recalled.

“I trotted along to the Bucharest location for what I considered would be an hour or so of my time to write a short story for the inside pages of the next day’s edition.

“Instead, I found myself amidst an army of elbow-thrashing, camera-whirring world media and whirled into a bizarre, week-long trek in the company of philosophers, writers, senior academics and confirmed vampirologists through the wilds of Transylvania.

“Some participants liked to sleep in coffins. Others had their teeth altered to match the object of their hero-worship. And still others offered generous financial rewards for the first verified sighting of the Prince.”

This was in the mid 1990s and with the 100th anniversary of the publication of Dubliner Bram Stoker’s chilling masterpiece looming large on the horizon in 1997, an idea took shape.

“Being from Ireland. home of the vampire’s maker, and having lived in Transylvania, alleged home of the vampire itself, I felt a strong urge to investigate this phenomenon further, to dig for Dracula in an attempt to unearth some insights into his condition and ours, to find out what made him what he is today.

“My journey took me from the dark, mysterious forests of the Carpathian Mountains, the very heart of eastern Europe’s vampire-roving region, to the glittering galaxy of stars that is Hollywood, USA.

“I searched for Dracula under a midnight moon in the fifteenth century ruins of Vlad the Impaler’s castle, rowed across a swamp get to the forbidden burial place on Snagov Island, clambered through the monumental floating tombs in the City of the Dead looking for clues and examined mummified remains deep in a Dublin church crypt, all to uncover the inspiration that brought Bram to brilliance.

“In doing so I met a rainbow of idiosyncratic people in a host of strange places. Many of both were charming and graceful and a few were outright menacing and dangerous.

“At times I was filled to bursting with paroxysms of laughter, at others with deep intrigue and still others, with fear for my own life.

“I wondered if there was indeed a clear difference between fact and fiction, between reality and the world of the imagination.”

Somehow, he pulled out all the stops and the book made the deadline and was published to critical acclaim by the Dracula Transylvanian Club, Ireland in time for the anniversary.

Only 1,000 copies were printed, each coming in a coffin lined with red silk and a crystal hewn from the rugged Romanian landscape. Quite a collector’s piece.

Sadly, the book is now almost impossible to find, but to mark the centenary of Stoker’s death in 2012 it was reissued on Kindle helping it find a second life.

In recent years he bought a house in Donegal to enjoy what he describes as ‘a refreshing, non-polluted environment offering a delightful haven of peace and tranquility to read, write, hike and sail among the islands’.

Aside from his unique travelogue, John has written several books on journalism and media and public relations training.

More recently he has cut his teeth as a novelist.

The fact that Sean is now married to Columbia, ‘a wonderful lady from Transylvania’, indicates just how entranced he became in the subject!