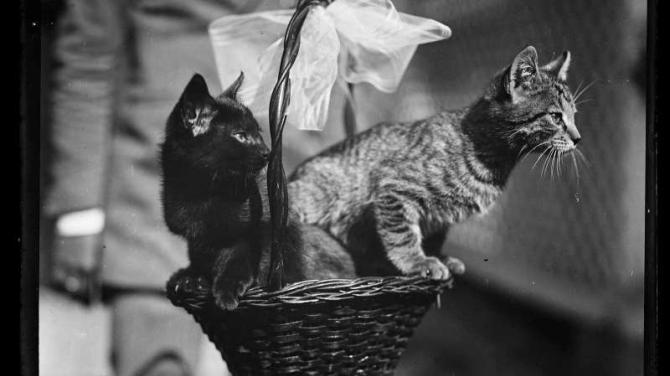 WHAT is Parkgate noted for?

Ask that question today and you may be greeted with a blank stare.

The small village of 600-odd souls at the foot of Donegore Hill is a perfectly pleasant place, of course, but outsiders may struggle to find that remarkable feature that sets it apart.

But if you posed the same question a century ago, chances are the response would be emphatic.

For the record, the answer is cats - and practical jokers.

It has been said that there are more cats in Parkgate per head of the population than in any other village in the County of Antrim.

Why? Possibly because the ‘hoax of the century’ in the early 1860s.

But before regaling the tale, a word of warning: aspects of this story are strong meat.

Comedy is subjective, and attitudes do change, but animal lovers should tread carefully before reading more about these fun-loving folk!

Back in 1941 a writer was passing through when he first heard about the ‘great Parkgate Cat Fair’.

‘The story is an old, old one, but it makes ever-new reading and telling.

‘Although nearly a century has passed since this extraordinary hoax, and all the cats and all the jokers have passed away they still tell the story in Parkgate as they gather round the fire on winter nights...’

Parkgate at the time, he added, was considered ‘the most exciting village in the whole of the county’.

‘Something was always happening there, particularly in the winter when the days were short and there was not much to do on the land and the young fellows were always up to some mischief or other’.

The worst of them all were Tommy McNiece, a farmer’s son, and Tommy Aitchison, a blacksmith.

‘They were as bright a pair of young sparks as were to be found in a day’s march.

‘It was McNiece who on a certain never-to-be-forgotten occasion tied a bulldog to the bell-rope of Donegore Church, and created a ghost scare which gave the parish a sleepless night, and gave a bull-dog an exceedingly sore tail’.

The incident was the talk of the village for days, but it was soon eclipsed by another ‘elaborate spoof’.

One morning in February locals awoke to discover notices plastered on trees and fences across Parkgate. They were everywhere, appearing in Antrim, Templepatrick Donegore, Doagh and further afield.

It read: ‘I will attend at the Courthouse in Parkgate on the 7th February to purchase cats for the Peruvian Government. From 10s to 15s each will be given according to their colour and quality’.

Bearing in mind that cats abounded in the district at the time, there was potentially some serious money to be made.

There was hardly a house without at least one, with farmers keeping three or four to keep the rats at bay. You could not have too many, though!

‘The value of puss rose steadily but surely in the few short days between the posting of the bills and the fated fair.

‘If only the whimper of a mew was heard around the big stones on Ferguson’s land half a dozen pairs of straining arms, male and female, were at once extended to save poor puss from a lonely fate and place her amongst her equals with a price upon her head’.

It appears that as news of the Peruvian Government’s generous offer spread, the locals ‘swallowed it hook, line and sinker’.

‘Note how subtly the offer was worded’, noted the visiting scribe.

‘The selection of the Courthouse as the cat mart connoting all the majesty of the law was sufficient in itself to allay all suspicion as to the bone-fides of the advertiser.

‘The date, too, synchronised with the Candlemas Fair which was always held in the first week of February and mostly on the seventh, and which attracted people from all parts of East Antrim’.

You can imagine what happened next.

‘The result was that on the morning of February 7 the people of Templepatrick and district carrying their cats in boxes, baskets, in carts, traps and gigs or simply in their arms descended on the Courthouse in Parkgate en masse.

‘There were hundreds and hundreds of cats - fat cats, lean cats, mangy cats, Persian cats - every shade and variety of cat from a dozen townlands’.

“The dawn of the fair had not broken before the traders, fair and otherwise, began to arrive, whether it was herself from Browndod in her heavy go-to-meeting boots - at home she was more comfortable in her everlasting stockings - with a stout basket on her arm which swayed from side to side like gamecocks in a sack on a pedlar’s back having all the appearance of life in it - that was the home puss on its one and only journey in life, with Parkgate the terminus.

“Here and there herself was joined by one and two until a clump was gathered as if they were making for First Donegore on a Sunday morning quite as serious looking with a bright lurking suspicion however in the eye that they were going to receive and not to part with this world’s gear.

“Old men with gathered-up sacks came down the Mote Road somewhat suspicious of each other for fear that there might be a glut in the market, and were met at Agnew’s Corner by others tramping up from Templepatrick village, where all was trim and neat and stray cats did not abound except about the Poor Row. My Lord’s gamekeeepers saw to that.

“Still the price was seductive and the credit short, so the sacrifice was made with the comforting solace that ‘there was plenty more where they came from’.

“Young strappers from the spinning mills of Ballyclare pushed each other around the corners of Doagh, out-rivalling the villagers in ribald talk.

“The old howdie woman from the Four Mile Burn was early afoot with her black triplets in an arm basket. She had sat on a creepie inside her half-door expecting to get a sail on a cart into Parkgate, although it was only short distance, instead of having to travel on foot, for the good dame, like Mrs. Gamp, the nimble of fingers was slow and heavy on her foot.

“Incautiously she opened the lid of her basket to see if all was right, when the most agile of her fry got free and made away through a slap in the fence.

“‘There goes my good 15 bob’, said she. She estimated her stock at top price like most people.

“Then there were others in carts and traps and pannier creels, each holding on to something that was occasionally audible but never musical.

“In they came in dribs and drabs mounted and on foot like Slattery’s Light Dragoons, until there was such a gathering as had never before been seen at any Candlemas Fair in the history of Parkgate.

“Pigs and poultry were pushed aside, old clothes gave place to fresh furs and you would have thought there was a State trial at the Courthouse or some big haul of poteen from Collin Top.

“There was some jostling, of course, and some horse-play, and considerable caterwauling and an odd cat broke from her moorings and there were stampedes of youngsters here and there bent on the recovery of these delinquents, either their own or that of someone else - it mattered not; the fun was good and the chances reasonable.”

Yes, the people of Parkgate and 20 miles around had turned out in style to honour to the ‘Peruvian representative’.

“They arrived at the Courthouse all smiles and in the best of spirits, in anticipation of the fine bargains they were going to make, but as the day wore on and the meal-hour came and went and there was no sign of the ‘Peruvian Ambassador’ the smiles began to disappear and the tempers both of the cat-vendors and their charges became a little frayed.

“There were long faces everywhere and cats - cats that snarled and clawed their way out of detaining arms, cats that fought with their owners and with one another, cats that made a thorough nuisance of themselves, and decamped for home and leaving despairing vendors wringing their hands on the Courthouse steps.”

It soon became apparent that they had been duped.

“How the wiseacres, the “I told you so’s” laughed. They had made a joke of the thing from the very beginning; they’d said the whole thing was a sham, and that the ‘Peruvian Government’ was only taking a hand out of the softies of Parkgate.

“How right they were. For it was a sham, a cold, heartless hoax that took the country by storm and set people laughing from Ballymena on the one side to Belfast on the other.

“One can easily imagine the feelings of the ‘softies’ themselves. They were the butt of the countryside and life for them became almost unbearable.”

So much so that they put their heads together and devised a scheme to get their own back on those responsible.

And suspicion at once fell on the ‘incorrigible practical jokers’ McNiece, Aitchison and their henchmen William Ellison, William Jamison and Archibald Ferguson.

There was no hard proof, of course, but it seemed to be the sort of thing they would have masterminded.

And with feelings running high, that was more than enough.

Unfortunately for Aitchison the fact that he had just got married singled him out for special attention from the counter-conspirators and when he brought his bride, ‘pretty Kitty Lavery’ home to a little thatched cottage in Parkgate Street ‘the fun began’.

Well, I suppose that depends on your definition of ‘fun’.

When darkness fell a dozen stealthy figures surrounded the place. The door was tied and bars were silently fastened across the windows.

Then up on the thatched roof climbed a couple of tittering young fellows with, of all things, a creel of cats.

There was loud whisper: “Let them go.” and the next thing was the cats had vanished down the chimney.

Trouble was, the fire was still burning brightly so ‘bedlam broke loose’.

“The scene in the kitchen as the cats came leaping out of the fire, screaming and snarling and spitting, and giving the poor bride the fright of her life baffles description.

“It was a cruel joke particularly for the cats, because at least one was impaled on the chimney crook and was burned to death.

“But so far as, the crowd outside were concerned it was poetic justice.”

Debatable, perhaps, but it did spark a short piece of poetry itself.

‘The smell of that cat,

That ever was met