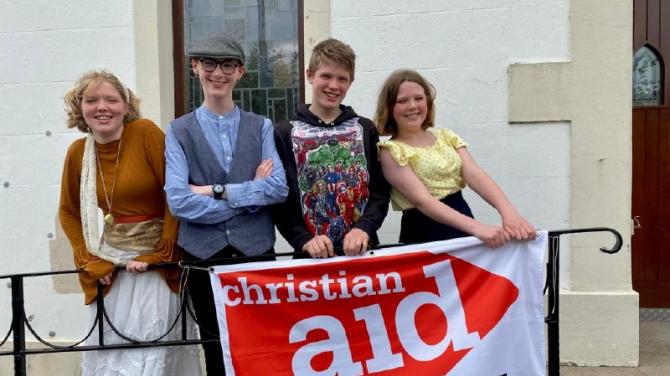 FOUR teenagers from the same Ballyclare family have volunteered their time to help raise much-needed funds to tackle extreme poverty in some of the world’s poorest communities.

The four, who all attend Ballyclare High School and are members of Ballyclare Presbyterian Church, were among 10 volunteers who delivered around 1,300 envelopes in the town.

The house-to-house collection was organised by Brian Douglas, Christian Aid representative at Ballyclare Presbyterian and Pamela Gray who coordinates the fundraising efforts of eleven churches in the Ballyclare area.

During Christian Aid Week, thousands of people in Northern Ireland have been fundraising and donating to support the charity’s work to bring relief to communities struggling with extreme poverty and experiencing conflict, drought, hunger and the impacts of climate change.

Besides the house-to-house collection, Ballyclare Presbyterian Church also held a Christian Aid Week service on 15 May at which the charity’s Vice-Chairperson Hazel Baird spoke and afterwards a lunch was held which raised almost £1,200 to fund relief efforts.

In nearby Doagh, Kilbride Presbyterian Church held their Christian Aid Week service on 8 May at which the charity’s Church and Community Officer Emilia Symington spoke, and a soup lunch was held afterwards, raising more than £900 to support the agency’s work.

Christian Aid Ireland Chief Executive Rosamond Bennett said: “Money raised for Christian Aid Week helps us reach even more people across the world facing extreme poverty, struggling with the impact of conflict and the consequences of the climate crisis.

“Our work to bring hope in these desperate situations is only possible because of the dedication of people like Chrissie, Jonathan, Benjamin and Katie.

“We are also grateful to Brian Douglas, Pamela Gray, everyone at Ballyclare and Kilbride Presbyterian Churches and all those who give so generously to support their fundraising efforts.”

Anyone who wishes to support Christian Aid’s work can bring their donation envelope to the Spar shop on the Doagh Road in Ballyclare. There is also the option to donate at https://caweek.ie/Donate or by telephone on 028 9064 8133.