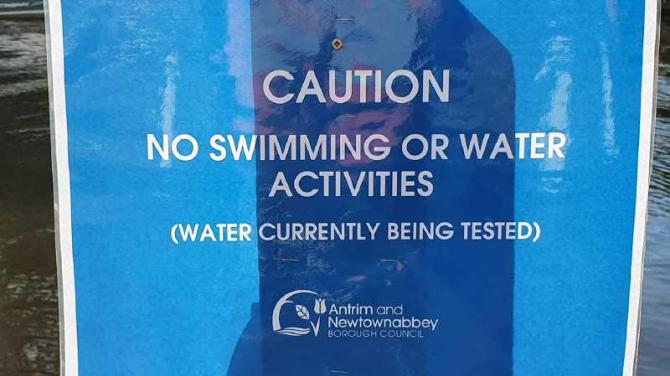 WEEKS on from an incident in which a number of dogs died or became ill after being walked near Antrim’s Lough Neagh shoreline, it is still not clear what the cause might have been.

However more and more local people have been reporting issues in the area, which is hugely popular with locals and tourists alike and is being touted as one of the borough’s biggest visitor attractions.

The council has advised people to keep themselves, their pets and children out of the water until further notice.

Minister of Agriculture, Environment and Rural Affairs, Edwin Poots, has told DUP South Antrim MLA Pam Cameron that so far, nothing has been found in the water.

Rory McCarthy spoke out after his pet Titch passed away following a three-week battle with kidney failure.

He believes the terrier cross came into a substance in an area away from the water.

Ms Agnew has also slammed a lack of communication by the investigating authorities, saying that she was learning of updates via the Press and social media.

Ms Cameron said she received an update from DAERA Minister Poots, which reported that no dangerous blue green algae was detected and that nothing of significance detected from water sample

An Antrim and Newtownabbey Council investigation is still ongoing.

Ms Cameron had asked the minister for an update on ‘any investigation or testing carried out in conjunction with Antrim and Newtownabbey Borough Council at Lough Neagh, following the recent death of two pets’.

In a written response, Mr Poots said: “I was sorry to hear about the recent deaths of two young dogs in Rea’s Wood area of Lough Neagh.

colleagues in Antrim and Newtownabbey Borough Council (ANBC) to assist them with their investigation.

“NIEA officials have inspected the area for visual signs of water pollution. No blue green algae were found in water samples examined at the Water Management Unit in Lisburn.

“A water sample was taken for a broad sweep of organic substances and nothing of significance was detected.

“The substances that were identified are commonly found at low levels in rivers and lakes across NI. The results of all our analyses have been shared with ANBC to assist with their investigation.”

However another resident has claimed that dead terns, gulls and fish have washed up near the boat club.

“Terns that had just landed and died where the sat. Really worrying that they are saying nothing out of the ordinary?” said Tony Addison.

“Fear this is killing tourism with people who stay at the local caravan park who bring their children to engage in watersports, not to mention us locals who own dogs that usually love jumping into the Lough but we are all terrified of losing out precious pets.

“The communication has been appalling and we could do with something above the normal apathetic responses we normally get when trying to get things done.”

“There are mink along the river and Lough shore. Maybe someone set out poison for the mink but the dogs found it.”

Sam Clarke added: “The tests that are required are so common and very easily done, and are taken regularly at testing and sampling points on the way in and out of any watercourse.

“Where there is a report of these issues there is a very well rehearsed process for checking and rechecking over a period of time to look for spikes etc. for example a contaminant that peaks and drops due to weather, man made sources etc, to assist working out where it’s from.

“Perhaps if the regularity and the results of the tests were known then people would know the action being taken was proportional to the issue.

“I fear that this is cross agency and council, and no one wants to be accountable to say that the area is no longer a risk.”

Meanwhile Mr Poots has also responded to concerns from Alliance South Antrim MLA John Blair over pollution of the Three Mile Water in the borough.

On Tuesday May 10, the Northern Ireland Environment Agency received a report, via the NIEA Incident Hotline, of a blue/green discoloration impacting the Three Mile Water River downstream of Mossley Mill Civic Centre.

Mr Poots said: “NIEA Water Quality Inspectors were on site that morning and the investigation under the Water (NI) Order 1999 continued into the afternoon in order assess the nature of the pollution and its environmental impact on the waterway.

“Further reports of a similar nature, along with

photographic evidence, were received subsequent to the initial report.

“The investigation on 10 May 2022 has confirmed that the material causing the blue/green discoloration, entered the river in the vicinity of or upstream of Mossley Mill.

“From investigation, the discoloration was observed along the entire length of the river downstream from the mill but had largely passed through the system by lunchtime that day.

“Unfortunately, the reported discoloration at the mill had dissipated by the time of investigation and tracing further upstream towards the source was not possible.

“Despite the concerning visual appearance, there was no evidence that the discoloration has had any significant or longer term impact on the waterway and no impact on the fishery was recorded.

“NIEA has however collated evidence that points to incidents of a similar nature having occurred in the same area recently. From the details to date, I can confirm that these incidents are not related to the fish kills which occurred on the river in 2021.

“NIEA officers are carrying out a desktop study regarding possible sources of the observed material in the catchment upstream of Mossley Mill and have scheduled inspections of a number of commercial premises in the catchment.

“Any premises identified from those inspections as potentially being a source of this incident will be requested to take all steps necessary to prevent further discharge to the river.”

Mr Blair said: “Disappointing that source could not be traced on this occasion.

“I will continue to request prompt follow up seeking outcomes following initial report.”