Almost £1,700 is raised for Trust in memory of Archie 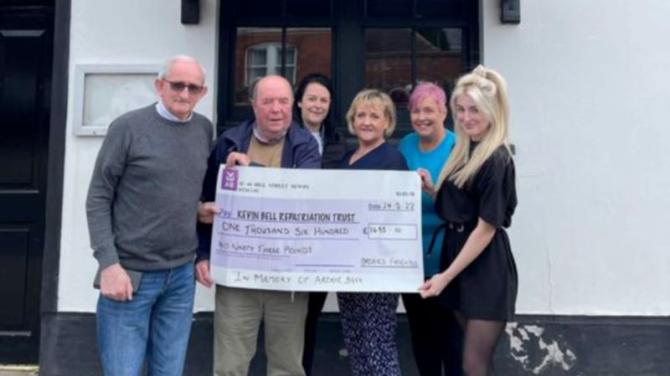 ALMOST £1700 has been raised for a good cause in memory of one of Antrim’s most fondly remembered adopted sons.

Ruby’s in Antrim held a charity quiz in aid of the Kevin Bell Repatriation Trust in memory of Archie Bann raising £1693.

Archie Bann, who was originally from Newry, passed away in September.

He was the loving and devoted husband of Maura, father of Leonora and Stephen, father-in-law of Lisa and grandfather to Erin and Niamh.

Mr Bann, who once worked for Enkalon and settled in Parkhall, was fondly known as a postman in the town - once winning a UK-wide award - and was a huge Arsenal fan.

He was a popular patron of Ruby’s Bar and Nelson’s Bakery, a selfless fundraiser and always had a smile and a moment to chat to anyone he met as he took his daily walks through the town.

The Kevin Bell Repatriation Trust was founded by Colin Bell from Newry after his son Kevin was killed in an accident in New York in 2013.

Money was raised to help bring his body back home and any left over was then used to help other families across Ireland – North and South – to repatriate the bodies of loved ones.

Since then, the charity has helped assist over 1,300 families by covering the costs of repatriation.

Colin said: “Many thanks to the friends of the much missed Archie Bann who held a quiz in his memory in their, and his local, Ruby’s Lounge in Antrim, raising a marvellous £1693 for the Trust.

“Although Archie lived in Antrim he was still a proud Newry man and visited home weekly and was a frequent visitor to the KBRT office, often with the proceeds of his latest fundraiser. RIP Archie.”