Diana: the remarkable Antrim Lady who could have been Queen 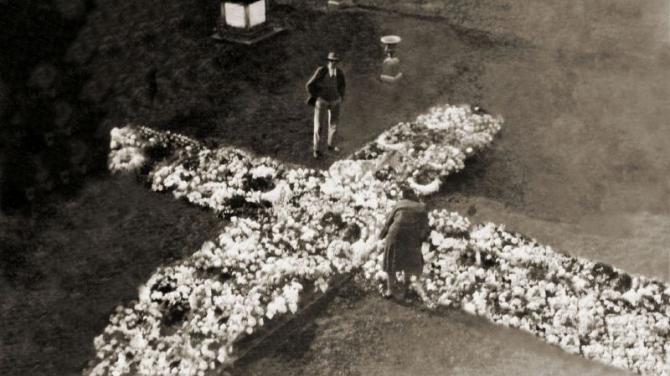 LOCALS may have noticed a subtle but significant change in the Castle Gardens in recent days.

The popular Garden Coffee Shop is no more, replaced by Diana’s Tearooms and Courtyard.

The name has long been linked to the historic grounds, yet many are still unfamiliar with the young woman lying in eternal rest just a few hundred yards away.

During her short life she touched the lives of people rich and poor and, had she lived, she may have altered the course of British history.

It is a remarkable story - and one we shall begin at the very end.

Antrim ground to a standstill on November 6 1930 as the ordinary towns folk joined the gentry to pay a tearful final farewell.

The heavens opened as the honourable Diana Elizabeth Margaret Skeffington made her final journey along High Street. She was just 21.

No one could quite believe that Diana - the local girl who had caught the eye of Royalty - had gone.

Sadly now, almost a century on, there are many who never knew she existed at all.

But on that wintry morning there was only one name on everyone’s lips.

Local lass Sadie Bain remembered the funeral and the huge crowds that lined the street on that blustery day.

Her father John was Viscount Massereene and Ferrard’s head gardener and also the Sexton of All Saints’ Parish church.

On November 6 he had the solemn duty of tolling the church bell for the funeral.

Her coffin was draped with the family crest and a full-length cross of white lilies. Attached to it was a card bearing the inscription ‘To our Darling from Daddy, Jean and Jock’.

Newspaper reports from that sombre day reflect the aching sense of loss. Antrim was, said one reporter, ‘wrapped in gloom’.

‘The deceased young lady was adored by everyone in her native Antrim, for it was there twenty-one years ago she first saw the light day.

‘Her young life was rapped up in the inhabitants, and they on the other hand hold her in most affectionate esteem, watched her growing with intense rapture from childhood into maidenhood, and held out for her a long and happy life in years to come.

‘She was one of themselves, entering into all their joys and mourning with them in times of sorrow or disappointment therefore it was not to be wondered at that her passing in the bloom youth created a wrench in the lives of many that will not be healed for many a long day.

‘She was a beloved member of the Girl Guide movement and a member of the local Hockey Club, whilst her kindly and genial disposition earned for her the esteem and respect of everyone.

‘The poor of the town will miss her kindly and genial presence and her generous help, which no time was ever withheld in any good cause.

‘The huge crowd of people who thronged the street abutting on the parish church on Monday bore silent but impressive testimony to the grief which was shared with her parents in their hour of stricken bereavement.

‘Flags were flown at half-mast from the flagpole in the Castle grounds, the local Protestant Hall, and the closed shops and complete suspension of business testified to the grief there was in every heart at the loss of one so fair and winsome, beautiful in character and disposition, and kind and tender-hearted’.

The ordinary folk were joined by many VIPs.

They included her aunt, Lady Ainsworth, Captain Leckey, the High Sheriff for the County; and Captain Chichester Clark, MP.

Representatives of the Senate and Ulster House of Parliament turned out in force, along with members of the North Irish Horse, which had been founded by her father.

Clotworthy Masonic Lodge No 593 turned out too, along with members of the ‘Orange brotherhood of Antrim District - and Antrim Agricultural Society, of which Lord Massereene was patron.

At the end of the service in All Saints’ Parish Church, the organist - John Entwistle from Muckamore - played Beethoven’s Funeral March by special request of Lord and Lady Massereene.

Unsurprisingly, there was not a dry eye in the house.

Diana then began her final journey in her bridesmaid dress to the grounds where she had played as a child. The burial plot, known as ‘The Pontier’, had been consecrated for the interment.

‘It was beautifully lined with moss and powdered with white chrysanthemums, the letter ‘D’ being beautifully worked out in flowers in the end of the grave over the head of its beautiful occupant.

‘As the committal prayers were recited and the Benediction pronounced by the Lord Primate signs of very poignant grief on the part of many around the open grave was plainly visible’.

Speaking to the Guardian several years ago Sadie Bain recalled the palpable sense of shock that such a vibrant and promising young life had been lost.

But, like her modern namesake, there was much more to Lady Diana than the nature of her untimely demise.

As a child she was a Girl Guide in the Antrim Company, which was then run by Miss Entwistle. Diana was 11-years-old when she was enrolled by Mrs Molloy her governess.

Diana went on to become the leader of the Primrose Patrol in the Antrim Company - and Sadie Bain’s sister Millie was a seconder.

Sadie lived with her family in the ‘Frenchman’s house’ in Castle street when it was originally on its own and next to an archway which led to the Castle Grounds, gardens and of course the castle.

Diana used to call at the house regularly accompanied by her governess. She would leave her young charge and return to join her on the short stroll back to the castle.

She always came to the back door and this used to make Sadie’s mum so angry because, after all, she was a Lady and should use the front door!

Also Sadie’s mum was ‘mortified’ at having to bring Lady Diana through the scullery and kitchen to reach the parlour.

“Lady Diana, being used to servants, would stand there waiting for someone to take off her coat and it would be the same when she was leaving,” said Sadie.

“She didn’t mean any thing by it - it was just the way she was brought up.

“Diana was a very nice girl. She was tall, thin, and very beautiful and treated us as equals.

“When she was with us she was just like any other girl, but our mother always made us call her Miss Diana.”

One day when Diana had dropped by she asked Mrs McElrea if Millie could go with her to a shop she had heard sold sweets. She agreed and off they went.

Once inside the shop, Diana - who had never done any shopping on her own before - gave Millie the money and told her what sweets to buy.

“Of course when they got back to the house Diana immediately shared them out,” said Sadie.

“She was known and liked by everyone and also she knew everyone in the town.”

Other people recall her as a quiet spoken girl, who shared her mother’s slender figure and striking good looks - and though she enjoyed being ‘one of the girls’, it was clear that she was destined to take a different path than her contemporaries.

This was underlined when she was 17 and she attended her first fete at Mount Stewart.

One of the ladies attending remarked: ‘There is a remarkably good-looking, tall girl here. I don’t know who she is, but she is working as hard as any waitress in the restaurant and has been working so all afternoon’.

It was, of course, Diana.

The following year when she was 18 and she was presented to society.

All society girls were supposed to be beautiful but the modest local lady did indeed stand out from the crowd - and soon she was in great demand among the society set.

Before long she became one of the best liked girls in London society, so it was no surprise that the Prince of Wales was as ‘smitten’ by her as well as everyone else.

Her star was in the ascendant. No-one could have guessed that it was soon to fade.

Diana was 21 when she agreed to be a bridesmaid for Miss Susan Roberts when she married the Hon. Somerset, Maxwell Farnham in Scotland on October 15 1930.

During the day Diana became thirsty and asked for a glass of water. Sadly the drink was contaminated.

The following week back at Ardanaseig House in Argyll, which was her mother’s family home, she collapsed with a fever.

It was diagnosed as Typhoid, which got worse over the following week.

Her parents took her back to London to see a Harley Street doctor but by then she had also contracted pneumonia.

Hopes were raised when Diana claimed to feel better and it seemed she would be well enough to return to Antrim. On Trafalgar Day, Diana took to the street to sell flags in aid of servicemen. It was a cold day and her friends were concerned about her fragile appearance and urged her to rest.

Sadly there was to be no miraculous recovery and she died.

Lady Diana was laid to rest in the burial grounds of Antrim Castle where you can still see her grave and headstone.

Time has moved on and the generation that bowed its heads in memory of Diana has slowly disappeared too.

When next you visit that small corner of the Castle Grounds perhaps you will pause to remember the beautiful young girl whose life was so tragically cut short - and spare a thought for the ‘ordinary’ girl who could have been Queen.

Every death, particularly of one so young, is tragic - but the passing of this young Debutante may have changed the course of British history.

Diana might have become Queen consort, and our current Queen Elizabeth II would have faded down the line of succession to live the life of a minor royal.

It was widely accepted that she was romantically linked to Prince Edward, who was then the Prince of Wales. His unhappy private life would go on to become all too public when he created a constitutional crisis when he abdicated the throne to marry Mrs Simpson.

Indeed, some commentators have said that he was drawn to the American because of a passing resemblance to Lady Diana...