Randalstown woman was there at start of Elizabeth's service - but they first met at Brownies! 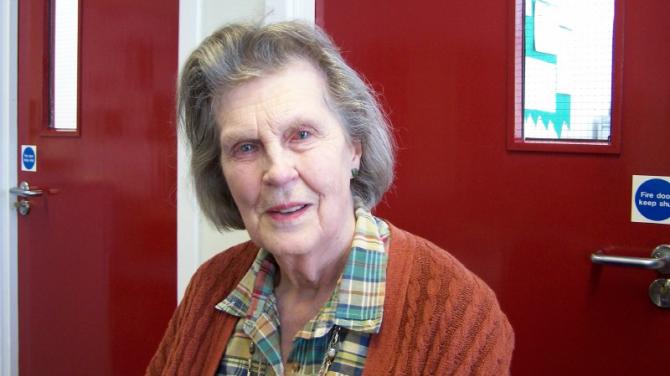 WHILE she may have been overwhelmed by the occasion when she took part in the Coronation, Randalstown woman Lady Moyra Campbell was not daunted by the company - after all, she had been in the Brownies with the new Queen!

Though she was blessed with a human touch that endeared her to the people in her inherited home, Lady Moyra was at the very heart of high society.

Arguably one of Randalstown’s most decorated citizens, Lady Campbell was one of just six maids of honour who walked up the aisle of Westminster Abbey behind the soon-to-be Queen Elizabeth II at the start of her epic life of service in 1953.

She often recalled the wonderful memories attached to the exquisite Norman Hartnell gown, her beautiful long white gloves and the glittering tiara she wore - souvenirs she kept throughout her long life.

And those historic keepsakes are to go on public display at Enniskillen Castle, along with some of the Queen’s dresses, to mark the Platinum Jubilee.

Her son Rory revealed that the gown had been stored under duvets to protect the delicate fabric from the sunlight.

Speaking this week, the local man said the event left an enormous impression on his mother.

Mr Campbell said his mother had known the Queen since they were children, and even attended Brownies together, but said he believes she was selected as the Palace wanted women from across the UK represented.

“She was woken up incredibly early on the day and taken into make-up, and then news came through that Sir Edmund Hillary and Sherpa Tenzing had just reached the top of Mount Everest and they all burst into tears so the make up had to be done again!” he said.

“Then at some point – and this is hotly debated among the maids of honour – it looked like one of them was going to faint and the Queen noticed and she looked at mum and indicated, mum made her own assessment of the situation, and looked back at the Queen – and so she was thrilled she was the first person to disobey the Queen. That very much summed mum up, she was a rebel.”

After the service they went back to Buckingham Palace and appeared on the famous balcony behind the Queen.

“That was obviously a thrill, and then they all went their separate ways. Mum went home, put on a cardy and went out to join the crowds to feel part of the buzz.”

It was the young Queen’s commitment to her people that left an indelible mark on Lady Moyra, who embarked on a lifelong supporter of charities such as the NSPCC, NI Cancer Fund for Kids and Early Years.

“If you asked mum, ‘what’s the thing you most remember about the service’, yes all of the glamour, all of the people, but it was the moment the cameras were turned off, and she went through the ceremony of becoming Queen, and agreeing to say ‘I am your servant’ to her people, and mum was really struck by that,” said Rory.

“Here was a girl, the same age as her who she knew, and was suddenly almost giving up her individual life to step into a role.

“I think that really inspired in mum a massive and life-long feeling of loyalty to that particular woman.

“She said she would have jumped under a bus for her on that day.

“Mum wasn’t just a sort of lady who lunches, she went round and bullied people into setting up drop-in centres and into supporting causes.

“If you could have seen her on a typical day wearing a leather jacket which she’d nicked from me in the 1980s, getting into a rusty old car with her Irish language cassettes falling out heading off to the Sperrins for meetings.”

Sadly, Lady Moyra passed away in November 2020 - but since then her son has been profoundly moved by stories about his mum that underline the esteem in which she is held.

She may have been born into privilege, but she saw herself as very much a ‘Magheralane woman’.

With an unrivalled character and genuine warmth, Lady Campbell was well known in Randalstown for her beaming smile as she chatted with everyone she passed while out doing her shopping, usually in her wax jacket and welly boots with a wicker basket in hand.

“She was free to talk with everyone, all her friends in the town.

“I can even remember as children it being almost embarrassing.

“You were hoping ‘don’t talk to anyone else’.

“For us, she really was an inspiration.

“When you look at that time, the early seventies, she introduced us to people from both sides of the community and helped us realise from a young age that we are all the same.

“Those sort of apparent distinctions made no difference to her at all.

“It has been heartwarming to see the impact she had on others too.

“The resultant outpouring shows that and while Covid meant we couldn’t really welcome people in to the home, the phone never stopped.”

Lady Campbell missed out on going to university and while her family always felt this was truly a missed opportunity given her passion for painting, Rory recognises the freedom it gave her to pursue other interests and this led to her involvement with charities.

In her support for these exceptionally worthy causes, she travelled all over, making friends in all corners as she did everything in her power to further their interests.

“I can remember coming back from London about 15 or 16 years ago and I came into the living room and it was full of people,” Rory laughed.

“These were people from all over the world and they had travelled to Belfast for a conference and of course, my mother had them all home for tea.

“In all her efforts, she had the backing of my father.

“He was the systematic one and I suppose he kept her feet on the ground so to speak but they were quite the double act.

“They were married for 54 years and it was actually Buckingham Palace where they met.

“My mother was known for being one of Her Majesty’s ladies in waiting but my father was Equerry to the Queen too, that’s how they met and I suppose, in a way, he went on to play that role to my mother too.

“They loved each other very much.

“At a time, my father was very ill and my mother was driving to the hospital to see him every day.

“My mother battled Alzheimer’s before her death and was cared for in the Somme Nursing Home in Belfast and - pre-Covid - my father drove to visit her every day or was driven there by some wonderful friends.

“Not only was she was a devoted wife, but a wonderful mother and grandmother.

“As a child, I can remember her having these crazes for people in history, Richard III and so on.

“We would have been taken to all kinds of places to learn all about them.

“I think it’s fitting then, that her gown from the Coronation which is still in good condition, is something that we hope to donate to the Ulster Museum.

“It’s not just a piece of history, but a piece of design history and we’re all about design here so it should be shared with everyone.”

He added: “She was a Magheralane woman, a local girl at heart and that really was quite the achievement after her childhood.

“If she was here, I know what she would say.

“She would say that she was grateful for being able to live in the way that she did and for her involvement with the charities.”

Lady Campbell was a great supporter of the Royal British Legion too and the Randalstown Branch said they had lost an esteemed friend.

“When Randalstown Royal British Legion welcomed Commander Campbell as President, we really got the greatest gift of all in Lady Moyra,” said Willie Simpson.

“She has been the truest of friends to the Branch over the years and was loved and respected by all.

“The community will be a much sadder place without her.We were very lucky as a Branch, a town and a whole community to be blessed with people like Lady Moyra and Dr John Stewart who is also sadly no longer with us.

“They were both smashing examples of just how people could be.”