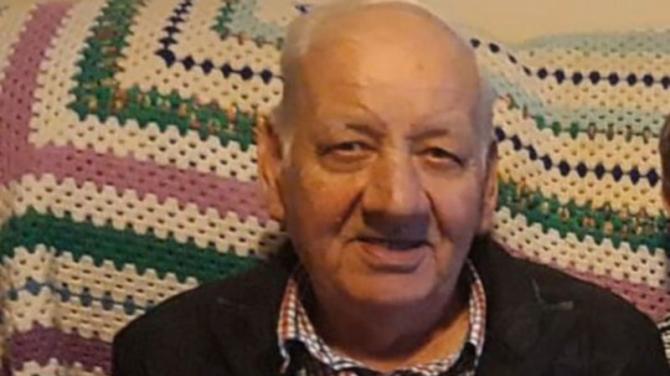 TRIBUTES have been paid to an Antrim veteran who passed away at the end of May.

John Williamson, known as Johnny, from Hillside on the Dublin Road, was husband of the late Nita, father of Tracey and Julie, father in law of Dave, loving brother of Derek, grandfather of Nicholas and Samuel, great grandfather of Neave and Ruby-Alice.

A Service of Thanksgiving for John’s life was held in Baird’s Funeral Home before burial at Belmont Cemetery.

Donations in lieu of flowers were invited to the Northern Ireland Hospice.

A death notice read: “Lovingly remembered and sadly missed by his daughters and entire family circle.

“A smile for all, a heart of gold, one of the best this world could hold, never selfish, always kind, these are the memories you leave behind.”

A former Ulster Defence Regiment man and Ministry of Defence employee, Jonny was a regular at the Royal British Legion in Antrim town and the branch chairman Paul Michael was invited to speak at the funeral.

He was also a well known face around Antrim town.

“I was honoured to speak at his funeral service as a request by his family,” said Mr Michael.

“Johnny had a lifetime of service with the Ulster Defence Regiment and the Royal British Legion.

“He served during the dark days of our Troubles and was a loyal member of the Legion never missing a veteran’s funeral to pay thanks for their service and sacrifice, it was only fitting that his final journey was attended by those who served and knew him over many years.

“At the going down of the sun and in the morning, We Will Remember Him.”

Jim Byrne added: “So Sorry to find John has passed. A very, very dear friend and a lovely, lovely person. I will miss him so much. Condolences to all the family for their great loss. Rest in Peace John.”

Mark Majury recalled: “Many a good verbal sparrings we had across the table in the Legion.”

Brian Lee said: “So sad at the news, Johnny was one of life's gentlemen a true friend and comrade, my condolences to his family. I salute you Johnny.”

Robert Abernethy added: “What sad, sad news of the passing of a wonderful man, condolences to all his family circle RIP Johnny.

And Alistair Mac Fadyen said: “Really sorry to hear of the passing of Johnny.

“He was a real gentleman. Had the pleasure of working with him while working for the MOD.

“He had a personality of his own that brought a smile to all who knew him.”