Council events 'thank the Queen for 70 years of service' 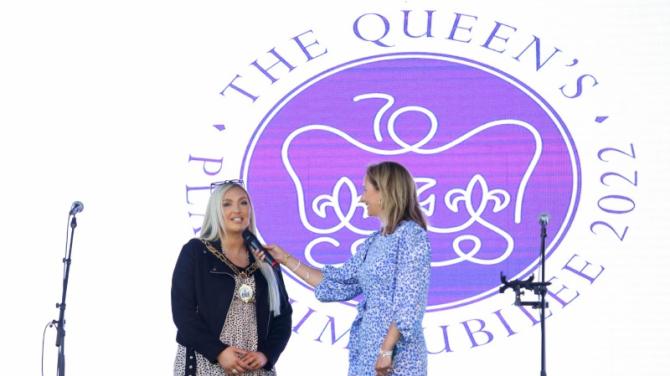 ANTRIM and Newtownabbey Borough Council paid tribute to Her Majesty the Queen with a royal line up of events to commemorate the Queen’s Platinum Jubilee 2-5 June.

Thousands came out to celebrate the momentous occasion, which the borough is unlikely to see again.

The line up began on Thursday June 2 with beacon lightings across the seven DEA areas in the Borough, representing the seven decades of devotion from the Queen.

On Friday June 3, communities came together with street parties and celebrations where young and old celebrated in style.

On Saturday June 4 the Platinum Jubilee Clockwork Garden at Antrim Castle Gardens was officially opened by the Lord-Lieutenant for County Antrim Mr David McCorkell KStJ and The Mayor of Antrim and Newtownabbey Councillor Stephen Ross.

Guests basked in the sunshine at a special garden party to celebrate the occasion.

The garden, billed as ‘Fit for a Queen ‘was created by Garden designer Diarmuid Gavin and specially commissioned as part of the Council’s Platinum Jubilee Celebrations.

The garden, the only one of its kind in the UK has ‘Dancing Trees for the Jubilee’ which put on a show every 15 minutes.

The council said this will be ‘a lasting legacy to Her Majesty the Queen’.

On Sunday, Big Thank you Lunches across the Borough were a great hit, as families and friends came together with their picnics in open spaces and parks to say ‘Thank You’ to the Queen for her seventy years’ of service.

There was live music, street theatre and plenty of laughter.

Those at Antrim Loughshore Park had an added bonus when The Right Honourable Minister of State for Northern Ireland Mr Connor Burns MP joined in the celebrations.

“Reaching 70 years of unwavering service is a truly remarkable achievement and it is only appropriate that communities should come together in such a majestic setting to mark this milestone in history.

“I want to congratulate the Council for organising such a rich programme of events, allowing people of all ages to get involved in the celebrations over the Jubilee weekend.”

Mayor of Antrim and Newtownabbey, Councillor Stephen Ross said: “It was a pleasure to join in so many of the Jubilee celebrations with people from across the Borough and beyond.

“I am especially pleased that those in attendance at Antrim today received a surprise treat thanks to the arrival of the Rt Hon Conor Burns. This Ministerial visit was an additional highlight on top of what was already a fantastic weekend of events.”