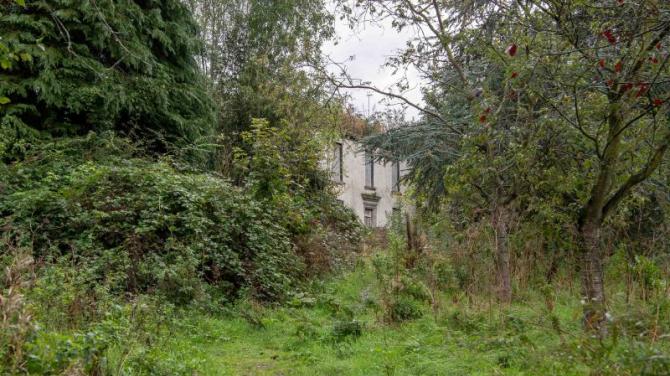 AS Antrim partied to celebrate the Queen’s Platinum Jubilee at the weekend, ‘droves’ of young people were having their own shindig in the grounds of an historic property in the town.

Riverside residents say they are ‘at their wits end’ in recent months because of teenagers congregating at the derelict building at number 51b.

Originally a grand house dating from the early 1800s, with links to the Paper Mill industry, the house formerly known as ‘The Cedars’ lies within Antrim Conservation Area.

The property is already facing demolition after a developer lodged plans to build houses and apartments at the site.

In recent weeks, large groups of teenagers have been seen entering and exiting the site and parties have been getting rowdier by the day, according to people who live nearby.

And it is believed that at least some parents are dropping off and collecting their kids from the site, which is owned by Gribben Homes.

Local councillors and the PSNI - who have been called multiple times - have been made aware of the situation.

One resident told the Antrim Guardian: “We don’t think these are bad kids but there are minor incidents which are accumulating, including noise, littering, knocking on doors and window and we are worried that things are going to escalate if action is not taken.

“Generally when challenged, they are quite apologetic, but others have given local people quite a lot of cheek.

“We also worry that the teenagers themselves will get injured, as the house must be in a pretty bad state of repair by now.

“We would ask that parents know where their kids are and maybe take a bit more responsibility.

“It is certainly apparent that some parents are bringing their kids here and picking them up - this is completely unfair on residents, expecting them to deal with anti-social behaviour from other peoples’ kids from outside the area.

“What is also unfair is that someone can buy a property and let it go to wrack and ruin while a planning decision is made.

“If the property was properly secured and if the bushes were cut back to make the whole site more visible, it is unlikely that we would be experiencing these problems.

“So the developer needs to step up and take some responsibility.

“This is going to take a collective effort from residents, parents, councillors and the police.

“These kids need something better to do with their time - somewhere else.”