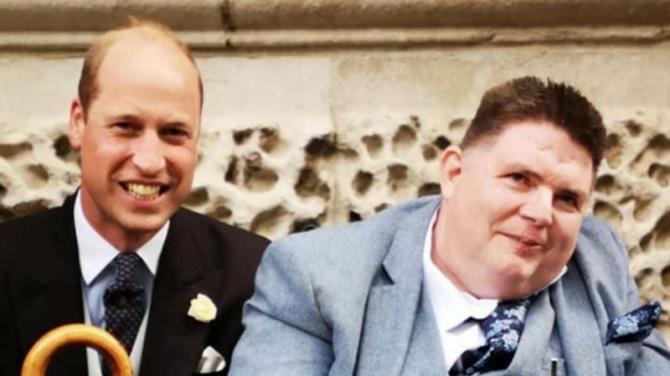 THE sister of a survivor of the Kegworth disaster said that she is ‘heartbroken’ after the family came down with covid.

The virus struck just days after jubilant Yvonne McCoy took her brother Stephen, who was awarded a British Empire Medal last year, to a garden party at Buckingham Palace.

Stephen was left brain damaged and a quadriplegic after a plane crash in 1989.

Devoted Yvonne gave up her job as a nursing auxiliary in an old people’s home to look after Stephen in a specially designed house funded by a £1.42m compensation award.

Friends and family say Stephen’s BEM is also recognition for Yvonne’s selfless devotion to her brother with whom she spends 12 hours a day, washing and dressing him, preparing his meals, giving him his medication and overseeing his physiotherapy in a purpose-built exercise room.

“He is so positive and so kind. And he loves being able to take part in efforts to raise money for other people.”

Stephen (49) from Toomebridge received his BEM for his community and charity work.

The citation that was read out singled out his fundraising for the sanctuary of Our Lady of Lourdes in France where he’s been a regular visitor, having been there over 20 times.

The money that he has helped raise has helped to send other people to the popular pilgrimage and prayer site and also pay for equipment for people with mobility issues.

Yvonne said that Stephen has been deeply upset that he hasn’t been able to return to Lourdes since 2019 because of the coronavirus pandemic.

The woman who nominated Stephen for his BEM was Randalstown pharmacist Sheelagh Hillan who is a Deputy Lieutenant for Antrim and who accompanied the McCoys to the investiture.

The £30,000 the former junior boxing champion has helped to raise has also boosted the coffers of Marie Curie and the Northern Ireland Air Ambulance.

However he was unable to jet off to London last year to receive his BEM at Buckingham Palace because of the pandemic.

“He was in floods of tears,” said Yvonn.

“He was so proud getting the British Empire Medal in those magnificent surroundings.

“And the Lord Lieutenant for Antrim Mr David McCorkell was lovely to him.

“They call Stephen the miracle man and that just about sums him up.

“We are so glad that he is still with us and he inspires us all every day with his courage and his spirit.”,

And she explained:“We had to do tests the night before,” she said.

“And then we had our temperatures taken just before the ceremony.

“And because of Covid I had to lift Stephen’s medal and pin it on him.”

“I just wish our father Idris who died just over a year ago had been alive to see this honour for Stephen.

“He would have been so proud”

Yvonne and Stephen finally got to travel to London last week, rubbing shoulders with Prince William and wife Kate, the Duchess of Cambridge.

William’s cousin Princess Beatrice and uncle Prince Edward and wife Sophie - the Earl and Countess of Wessex were also in attendance.

But just days later, Yvonne revealed: “After keeping mummy and Stephen safe for two years, they have Covid 19,” adding that she was ‘heartbroken’.

She also then herself tested postive for the virus,

The annual Buckingham Palace garden parties, started in the 1860s by Queen Victoria, are a way of recognising and rewarding public service and see people from all walks of life enjoy high tea on the lawn to the sounds of a military band.

Stephen was travelling back from a boxing competition in January 1989 when his British Midland flight from Heathrow to Belfast crashed into an embankment alongside the M1 motorway in Leicestershire close to East Midlands airport after encountering engine problems.

It transpired that after taking off from Heathrow and climbing to 28,000 feet, a blade suddenly detached from the left fan engine of the Boeing 737-400.

This disrupted the air conditioning and filled the flight deck with smoke.

The pilots believed that this indicated a fault in the right engine, since earlier models of the 737 ventilated the flight-deck from the right, and they were unaware that the 400 used a different system.

The crew mistakenly shut down the functioning engine, and pumped more fuel into the malfunctioning one, which burst into flames.

Of the 126 people aboard, 47 died and 74 sustained serious injuries.

Of the survivors, Stephen - who was a Light Featherweight boxing champion for County Antrim and Ulster at just 16 years of age - was the most seriously injured.

Both the Captain and First Officer survived but were seriously injured and were later dismissed following the criticisms of their actions - however Yvonne says she bears them no ill will and believes they were made ‘scapegoats’.

Stephen’s family was initially told to prepare for his funeral, but medics decided against turning off his life support after a nurse spotted his toe moving.

Stephen remained in a coma for six months, as his devoted family took it in turns to maintain a vigil at his bedside, both in England and then when he was transferred back to the Royal in Belfast.

Yvonne was determined to try to stimulate her brother, playing him his favourite music and bringing in items to arouse his senses.

“He was a punk rocker so it was the Undertones and the Ramones,” she laughed.

“I brought in eel oil for him to smell because he was into fishing and even textured stones and worms for him to feel.

“They’d have me thrown out for that now!

“Then out of the blue, he was able to respond to show me where his eyes and nose were by gesturing.”

In total, Stephen spent three years in hospital, transferring to the Waveney in Ballymena after coming out of the coma.

His left side is still paralysed, but the family have been experimenting with using a mechanical exo-skeleton to enable Stephen to walk with assistance.

“He had no speech at the start and used an alphabet board to communicate but he has speech now that we can understand.” said Yvonne.

“He has great patience and we know we’re lucky because you don’t know how the person is going to be after a head injury.

“We’ve truly got a wee saint.”

The Ballymena actor, who like Stephen is a former member of the All Saints boxing club in Ballymena, had initially bought the state-of-the art chair for his nephew Ronan Sexton who fell during a night out in Brighton with friends and tragically died five years later in 2019.