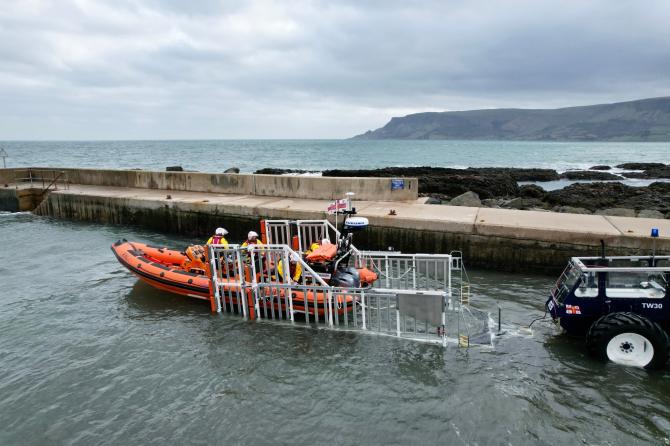 Volunteers at Red Bay RNLI saved a swimmer on Monday evening after she got into difficulty 200m from the shore at Cushendall.

The inshore lifeboat, helmed by Emmet Connon and with three crew members onboard, was on a training exercise in Red Bay when, at 7.35pm, a crew member standing on the shore outside the lifeboat station spotted a swimmer in great difficulty. He immediately raised the alarm and the crew on exercise diverted the short distance to the scene.

Weather conditions at the time were good, with an overcast sky and calm seas.

On arrival, the crew observed that the swimmer was struggling to stay afloat. Two crew members jumped into the sea and went to her aid before rescuing the casualty from the water and bringing her onboard the lifeboat where casualty care was administered as the lifeboat made its way back to the station.

Back at the shore, the casualty was handed into the care of a waiting ambulance crew and subsequently transferred to hospital.

Speaking following the call out, Red Bay RNLI Helm Emmet Connon said: "This was a frightening experience for the swimmer and we would like to wish her a speedy recovery. Time was of the essence this evening and we would like to commend our fellow crew member who spotted the casualty was in danger and immediately raised the alarm allowed us to get to her so quickly and bring her to safety."