Game (Fair) On as country comes to town - and look out for the Viking invasion! 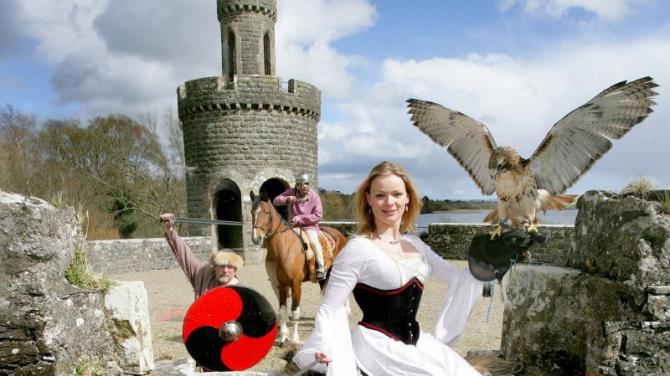 THE IRISH Game Fair at Shanes Castle is set to break all attendance records after an absence of two years due to the Covid pandemic.

Fair Director Albert Titterington said that the event, which had introduced three generations to the country lifestyle since he launched the first Irish Game Fair 43 years ago, would likely be attended by the largest number of people in its history.

Albert Titterington said: “The Irish Game Fair is the only major country sports event in Ireland this year and is a long awaited countryside extravaganza for thousands of enthusiasts and their families.

“While there is definitely a major country sports focus for the large and committed all-Ireland sporting audience, this year we have made sure that the Fair has an unrivalled breadth and depth of appeal as a comprehensive, family-focused celebration of Irish country life.”

He also announced that there was a very special addition to the Fair this year in the form of an ‘Antrim Fly Fair at Shanes Castle’ organised by Stevie Munn. He said: “This makes its debut with nearly 30 international fly dressers, trade stands, casting and fly tying demos and tuition.

There’s a special ‘put and take’ fishery for kids, a bug life experience and a big game angling simulator.”

Turning to what else was on offer at Shanes Castle this year, Albert Titterington said that there was quite literally something for everyone interested in country sports and conservation, dogs, donkeys, living history and of course, day long entertainment in three Arenas.

Albert Titterington said: “There will be displays by the main Irish country sports organisations exhibiting either in their own pavilions or in the ‘Salmon & Woodcock Pavilion,’ supported by DAERA. This includes the Federation of Salmon & Sea Trout Anglers; Ulster Angling Federation; No Salmon Nets Ireland; Association Professional Game Anglers Ireland, CIC trophy measurement, Irish Working Terrier Federation, plus a number of clubs and conservation bodies.

“A brand new addition is a terrier maze where terriers or other small dogs can be timed against the clock.

“There will be top quality clay pigeon shooting, ‘have a go archery’ and air rifle shooting and shooters can improve their shooting by getting their gun fitted to them by Chris Symonds or coaching by Shane Bisgood, author of the book ‘The Complete Shot’.

“In addition, there will be free flying falconry displays throughout the two days and a static display of birds including a golden eagle.

“There will be a ferret show and racing on Sunday morning.”

Mr Titterington outlined just some of the many attractions at this year’s Irish Game Fair:

“Our Fine Food and Craft Festival, arguably the highlight of a large tented village of country living retailers, is recognised as one of Northern Ireland’s biggest and best by the Daily Telegraph, Delicious magazine and BBC Farmer’s Country Showdown.

In addition to the artisan Food Festival the trade village of around 150 retailers from allover Ireland and GB provide virtually everything to ‘buy into’ the country lifestyle’.

From country fashion from well known names Like Barbour and ‘Duck Dri’; all sorts of vehicles including tractors, 4x4s from top marques, vintage and off road motorbikes; quads; gardening and garden equipment, all sorts of canine food, equipment and accessories and sporting goods.

Turning to the Living History Festival , Mr Titterington said that a full size Viking Longship and several dozen costumed re-enactors might well be the stars of the show:

“Living History Ireland’s encampment and re-enactments bring to life Antrim’s and Northern Ireland’s history in an entertaining and educational fashion. Sited in the evocative setting of the old Shanes Castle - reputedly damaged by a flaming banshee- families can wander through several time periods from Vikings to World War 2 in an educational as well as entertaining fashion as they interact with hundreds of costumed re-enactors.

“The main focus this year is on Vikings and the legend of the Red Hand of Ulster and the O’Neills.

“And apart from Viking clashes there will be a full size Viking longship which is definitely something not to be missed.”

“Children are very well catered for with a special Amusements Area for Children, DAERA Put and Take Fishery organised by Bobby Bryans and NSN team; Have a Go Archery and Field Target Air Rifle Shooting, animals galore, and a special Gamekeepers Marquee’ with game displays plus ferrets, falcons, horses, dogs and game birds and the brand new Terrier Maze will keep you entertained by the terriers’ antics.”

“Alongside the entertainment, competitions, displays and living history, a huge tented village of themed trade stands offers a wonderful opportunity for shoppers to try and buy.

“We offer excellent visitor services, including comprehensive food and drink offerings and facilities over a well-organised, stewarded, and signposted site including a free programme with map and free parking in close proximity to the main site.

“With its very central historic location on Lough Neagh; its unique country sports appeal; its Living History Festival and its award winning Fine Food Festival; the Irish Game Fair arguably ‘ticks more boxes’ of the ‘embrace the Giant Spirit’ brand than virtually any other event in delivering a complete and unique  visitor experience of country life and history”

Tickets can be purchased through Eventbrite or purchased at the gate in cash.

Eventbrite ticket holders will go straight through to priority parking.

Find out more at www.eventbrite.ie/e/

The Irish Game Fair at Shanes Castle is supported by TourismNI and Antrim and Newtownabbey Council; and by CastleWood Holiday Park.

Keep up to date with Game Fair news on www.irishgamefair.com or www.thevirtualgamefair.com