Work is set to start on Community Centre 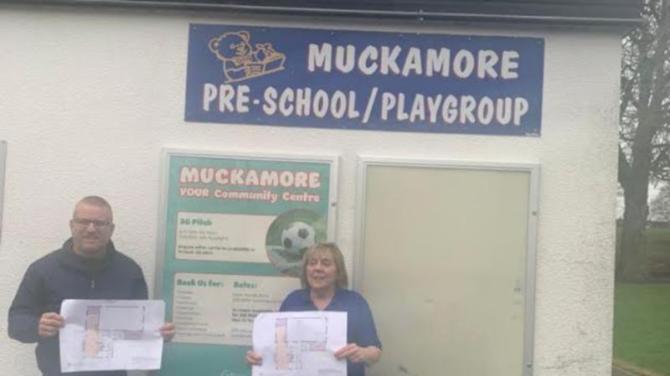 REFURBISHMENT works totalling £150,000 are due to get underway at Muckamore Community Centre later this month.

Antrim and Newtownabbey Borough Council has awarded the contract for the work to William Rodgers Construction.

The scope of the project includes a new 105m sq play space, a new staff office, removal of walls to increase equipment storage space, fitting out of toilets, a new cloakroom area, removal of the stage, and mechanical and electrical works.

The facility, located at Ballycraigy Road, has been home to Muckamore playgroup for over 40 years.

Mayor of Antrim and Newtownabbey Councillor Stephen Ross said: “Over the last four decades, Muckamore Community Centre has welcomed thousands of children to the pre-school from the surrounding areas of Muckamore, Ballycraigy and Newpark and helped them create many happy memories and friendships for life.

“I am pleased that this refurbishment work will breathe new life into the venue and allow it to continue servicing the needs of local people for many more years to come.”

The alteration work is expected to begin this later month and be completed by August.

Planning approval for the project was awarded in March.

The works will give more room to the long-running playgroup facility, which can now expand to meet local demand.

No consultations were carried out and five neighbouring properties were notified, but no letters of representation have been received.

Last year the Antrim Guardian revealed that Antrim and Newtownabbey Borough Council was poised to spend over £50,000 to help give the children at at the facilty more space.

The service has existed since 1978 and for over 40 years has hired the social area including the annex room.

The playgroup currently has an enrolment of 26 children in the morning and 24 in the afternoon.

Prior to the Coronavirus pandemic, the playgroup reported that an inspection by Social Services in February 2020 advised them of a need to increase the floor space requirements to accommodate the current number of children.

It was warned that if floor space was not increased, the playgroup would have to reduce child numbers and make a member of staff redundant.

Heather McIntyre, Pre-School Manager, said that she was looking forward to seeing the work begin.

“I’ve been here since 1995 and the service has just gone from strength to strength,” she said.

“The plans look great and this is a really exciting time for the group.

“It may even mean that as well as having more room for our existing children, one day we will be able to accept more numbers.

“It is great to finally see progress on this issue and we are delighted that the council has been sp supportive.

“We are in a brilliant position, right beside the play park, and we are looking forward to the future.”

DUP councillor Paul Dunlop, who has been supporting the playgroup, said: “I was contacted early last year by the pre -school with an issue regarding social services criteria on the number of children attending and space .

“The only option to retain numbers was to extend the building, so I lobbied council and was delighted when it passed through full council, therefore securing the future of the pre-school, which has long been a part of the local community.”