The mystery of the Antrim Giant 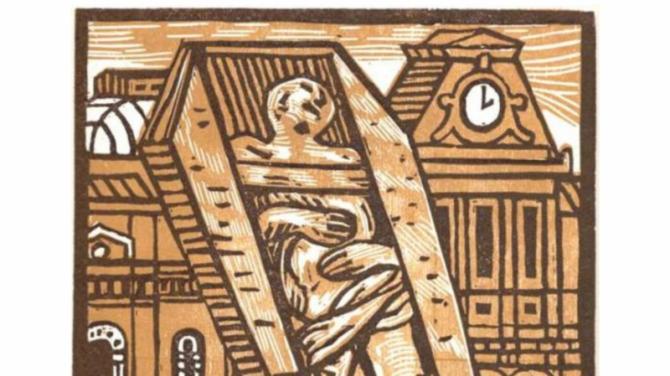 HAVE you ever heard of the ‘Antrim Giant’?

I must confess I had not, but it just may be one of the world’s biggest unsolved scientific mysteries - and one that could still rewrite the record books.

This tallest of tall tales first came to light in August 1903 when a ‘remarkable piece of left luggage’ was discovered in a London railway station.

The container was huge, tipping the scales at a shade under two tonnes.

It had been left at the Broad Street Depot back in 1876 but had recently been moved to the Worship Street Goods Depot of the London and North Western Railway Company.

Nobody seemed to know what was inside. Curiouser and curiouser.

Finally the decision was taken to prise off the lid and take a peak inside - and it would be fair to say that it created a sensation.

The crate contained a body. An enormous petrified body.

A reporter from the Freeman’s Journal raced to the scene to record ‘a curious story from London’, under the headline ‘An Antrim Giant’.

So what was so special about the eponymous passenger who had rested for decades in a forgotten corner of a railway station?

‘The figure is said to be perfect, and is that of a man 12 feet two inches in height with a chest girth of 60 and a half inches and arms four and a half feet in length’, noted the scribe.

‘It is noticeable that there are six toes on the right foot...’

So how had this massive figure found himself abandoned so far from home?

A key figure in the story is a Mr Dyer, who had been digging for iron ore and other precious minerals in the Antrim area.

But by chance he exhumed something potentially much more precious - a ‘giant’ which he reckoned could be worth his weight in gold at the travelling ‘freak shows’.

The man was dragged from his native peat and a huge crate was built, while the enterprising Mr Dyer considered how best he could turn his find to his ‘pecuniary advantage’.

It is understood that he exhibited his discovery briefly in Dublin, but he knew the big money would come by joining the circuit in England.

Mr Dyer and his man set sail for Liverpool and soon he put him to work, inviting thrill-seeking Victorians to cast their eyes on his anatomical wonder for sixpence a head.

But he wanted more. He needed a partner who could help him fully exploit his extraordinary find. Enter Mr Kershaw, an experienced showman.

They met in Manchester, but their working relationship was rocky at best - and soon Mr Dyer decided to rip up the deal and secretly ferry the giant onto the capital.

But Kershaw was onto him and sought a court order preventing him from collecting the imposing specimen until the question of ownership was resolved.

Unfortunately for the pair, it never was - and the Antrim Giant remained where he was, being quietly buried again under unclaimed luggage.

Which created something of a quandary for the railway company. Dyer and Kershaw were asserting their rights, and it certainly did not belong to them, to the decision was taken to let the dead man rest.

And that, said the Freeman’s Journal, was a shame.

‘It is a treasure which would attract thousands to see it - were public exhibition again possible’.

And then the trail goes cold.

The website Mummipedia - yes, who knew there was such a thing - confirmed that the whereabouts of the crate were currently unknown.

‘The giant was left with the rail company and nothing was heard about it since’.

So is he still there? Surely it would only be good manners to check?

After all, the Antrim Giant may be the tallest person who ever lived.

Famous ‘Irish Giant’ Brendan Holland, who was the doyen of 18th century London society under the stage name Charles Byrne, was put on display in the Hunterian Museum for over two centuries - to the consternation of his ancestors who want him back.

And he was undoubtedly a huge man - seven foot six in his stocking soles.

But the big man from Antrim was almost five feet taller.

Even Robert Pershing Wadlow, the American widely regarded as the all time champ, was a mere eight foot eleven. Our man was literally head and shoulders above him.

The story of the giant in the box is certainly an unusual one, but there are no shortage of tales of the unexpected in the archives.

Consider, for example, the story of a wedding back in Antrim back in August 1864.

What happened next made headlines across the UK!

‘One of the most singular illustrations of the well known aphorism ‘there’s many a slip ‘twixt the cup and the lip’ occurred in Antrim last week’, wrote one reporter.

From the outset, it bore all the hallmarks of a perfectly normal union between two well-heeled families.

A ‘dashing suite of three carriages with the customary embellishments’ conveyed the ‘happy bride and bridegroom and a joyous wedding party to the historic town of Antrim where the ceremony was arranged to take place’.

The party are said to have been in ‘the highest spirits’ and made their way immediately to the church ‘in which the twain were to be made one’.

‘The officiating clergyman was in readiness, the bride and bridegroom took their places, and the pretty bridesmaids, with a pardonable flutter of expectation, arranged themselves in their alloted positions’.

And all went ‘merry as a marriage bell’ until the minister asked those present if they knew of any just cause or impediment why the couple should not be joined in that holy estate.

It is a tense moment much beloved of sitcom writers - but on that morning in Antrim more than 150-years-ago something rather odd did happen.

‘The query was instantly responded to by a young gentleman in the body of the church, who protested that he had just reason to forbid the banns.

‘And, amid excitement which can be better imagined than described, he requested permission to put a question to the bride.

‘This was accorded him, and in manly voice he asked if she had not, some two years since, pledged her troth to him.

‘The fair fiancee hung her head and answered ‘yes’, and while her intended husband, in concert with the entire assemblage, gazed in utter bewilderment on the scene, the fickle fair one put a climax on the proceedings by adding - ‘And I will keep my word’.

‘Instantly seizing her former lover by the arm she swept him in majesty from the church, and entering one of the carriages which had driven the party to the sacred edifice, drove off at locomotive speed with her recovered swain to the residence of her mother, leaving the poor fellow in the church to ruminate over the constancy of fickle women and doubtless hoping ‘better luck next time’.’

Indeed! A warning to be wary when asking a question, if you don’t know the answer.

But it works both ways. Occasionally the twist in the tale can work in your favour.

Flashback to May 1896 and the police in Antrim were investigating a theft from Greenmount.

A pair of socks, a cotton shirt, a necktie and a pair of lady’s stockings had been reported missing and the local constabulary informed.

Working on a hunch that the culprit may try to flee to area, officers were dispatched to the train station - and on arrival their attention was drawn to shifty individual avoiding their game at the far end of the platform.

Constable William Johnston decided to check him out.

The man in question was William Ephrain Morrow and when he was tapped on the shoulder his reply was unusual to say the least...

Without missing a beat, Constable Johnston replied: “On all charges.”

It later emerged that he defendant had 30 previous convictions. A criminal mastermind he was not.

For his ‘honesty’ in the face of the lightest of policing questioning he was jailed for ‘six calendar months’.